Editor's note: This is the second of a three-part series focused on virtual energy storage. Part I delved into the way buildings can be used as batteries. To learn more about energy storage and buildings, be sure to check out [email protected] November 12-13.

Terry Boston, PJM President and CEO, once remarked, “Energy storage technology is the silver bullet that helps resolve the variability in power demand.” When most people conceive of energy storage, images of massive battery banks, reservoirs for hydrologic pump storage, or compressed-air systems come to mind. Yet these capital-intensive “hard storage” approaches are expensive and fall well short our energy storage needs. If energy storage represents the “silver bullet” to variability in power demand, as Boston contends, we must embrace more nimble, lower-cost solutions.

Fortunately, these solutions exist. As we have outlined previously, “virtual storage” systems have the capacity to transform buildings into batteries. Virtual storage systems include a new generation of building controls and technologies that more effectively meet energy storage needs – at a lower cost – than most of hard storage technologies now receiving investment from utilities and VC firms. As our power demand becomes more variable, virtual storage systems have the potential to revolutionize energy delivery. Instead of energy supply matching variability in demand, virtual storage will allow energy demand to match variability in supply.

Enormous uncertainty surrounds the future of U.S. electricity demand. The unclear growth trajectory of electric and plug-in hybrid vehicles is one reason why. The figure below summarizes of various credible projections about likely new EV penetration in the U.S. in 2020, ranging from a 1 percent projection by the Energy Information Agency, up to 11 percent in the U.S. (and even higher in Europe) by Deutsche Bank.[1] 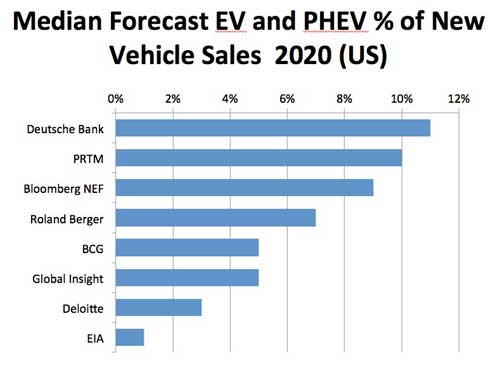 Where these vehicles recharge (or potentially discharge) will have dramatic consequences for the shape of load demand. Cars charging at work could add to peak-load demand. Or, if charged at home during off-peak periods, these vehicles could provide load demand to efficiently use nighttime wind. Alternatively, these vehicles could potentially charge at home, and then discharge some of their power back to the grid through connections at work during peak hours. The potential for electric vehicles to ameliorate — or possibly, worsen — electricity demand and supply will emerge as a large policy issue in the coming decade.

Increased adoption of renewable energy generation introduces an additional element of uncertainty into forecasting U.S. electricity demand. From 2007 through 2010, an average of 38 percent of new U.S. generating capacity was wind. Since wind is available only part time (e.g., 35 percent) and at varying times, this translates into substantially lower power available (e.g., MwH) than baseload power such as coal, nuclear or some hydro and natural gas plants. While the large increase in wind generation — jumping from 2 percent of new capacity in 2004 to a high of 43 percent in only five years — represents huge gains for U.S. security and employment, it also creates uncertainty for utility planning and investment. This uncertainty is worsened by volatile year-to-year changes in federal support for wind. Consequently, utility regulators and planners have a need for storage to shape and balance uncertain power demand, as well as shifting supply.

Similar circumstances apply for other types of renewable power generation. Power generation for solar photovoltaics peaks when the sun is highest at mid-day, some hours before the grid’s peak power needs, which is typically between 3 and 6 p.m. Storage can shift forward electricity from solar power by several hours to make it coincident with greatest demand – and higher prices. And because on-site storage does not need to traverse congested power transmission lines, it reduces transmission congestion and power line losses.

The uncertainty of load growth contributes to the need for storage – or the ability to reshape load. Hard storage investments — e.g., CAES and battery banks — are expensive, relatively inflexible and slow to install compared to virtual storage. In contrast, virtual storage relies mainly on software and low-cost hardware such as sensors and building management software upgrades. Through load shifting and efficiency, virtual storage delivers similar load-management benefits as hard storage but at far lower cost, making it the optimum strategy to manage risks and cut the costs of increasingly uncertain electricity demand and supply. While hard storage does provide back-up power — an important service that virtual storage does not offer. Stand-by power provided by hard storage can be very valuable or even critical. For example, ensuring continued operations of critical needs such as communications when grids fail is an excellent use of hard storage. However, the majority of demand for storage is for load reshaping, peak flattening, renewables integration and the ability to respond dynamically to utility needs to cut power consumption. These services are far more cost-effectively provided by virtual storage.

So how exactly does a virtual storage system address variability in power demand? Currently, utilities respond to spikes in power demand by firing up “peaker” power plants — usually among the dirtiest in the power generation fleet.

Within a virtual storage system, however, demand would be modified to match the available supply of power. Imagine an intelligent building system, such as BuildingIQ, that automatically adjusts HVAC and lighting levels, and starts on-site clean power generation. Electrochromatic glass on the building’s exterior reconfigures the amount of heat and light that passes through the window’s glazing, automatically. Smart grid systems, such as Tendril, activate demand response systems and coordinate hundreds of thousands of smart thermostats to shed load. Coupled with utility price incentives that create the financial motivation for load shaping, existing technologies can provide the means to smooth out the variations in power load.

This article was adapted by the co-authors from a longer version published in October 2012 in Electricity Journal.

Image of batteries by Termit via Shutterstock

What Does a Very Low Carbon Utility Look Like?