Do the math: Bill McKibben takes on Big Oil

Do the math: Bill McKibben takes on Big Oil

Most Americans own cars. Most cars run on gasoline.

Can we be persuaded to think of the oil industry as the enemy? What about the coal industry, which supplies more than a third of the electricity we use?

“Movements need enemies,” declares Bill McKibben, the author, activist and leader of grassroots group 350.org. So earlier this month, with allies including the Sierra Club and Greenpeace, McKibben and 350.org began a 20-city, month-long coast-to-coast tour called Do the Math that targets the fossil fuel industry.

It’s designed to invigorate the climate movement by calling upon colleges, foundations and governments to sell their stock in coal, oil and natural gas companies.

The campaign is modeled after the 1980s South Africa divestment campaign, which helped pressure the government to enter negotiations that eventually led to the end of apartheid. To underscore that point, South African Bishop Desmond Tutu will make appearances, on video, during the tour.

It’s time to focus on the polluters, McKibben said last week by phone from Seattle, where the tour kicked off. “We’ve spent so much time focusing on our elected officials, and so little time focusing on the players behind them,” he said.

“The fossil fuel industry is now the tobacco industry,” he told me. “They are now a rogue force in our society.”

Not surprisingly, the oil companies aren’t happy about any of this. Rayola Dougher, a senior economic advisor at the American Petroleum Institute, told me that McKibben’s attacks on U.S. oil companies, if they lead to higher carbon taxes or caps, would raise energy prices and risk American jobs, while doing little or nothing to curb greenhouse gas emissions. “Demonizing an industry is not a good starting point for dealing with a big and complex issue like this one,” she said.

Interestingly, though, Dougher did not challenge the basic math behind McKibben’s campaign. If fossil fuel companies burn all or even most of their known reserves of oil, coal and natural gas, he argues, the result will be an all-but-unlivable planet.

McKibben unveiled the math last summer in a must-read article in Rolling Stone magazine called Global Warming’s Terrifying New Math. (It generated 122,000 Facebook “likes” and more than 5,000 comments). The argument is summed up this way in the FAQs on the 350.org website:

To grasp the seriousness of the climate crisis, you just need to do a little math. Fossil fuel corporations have five times more oil and coal and gas in known reserves than climate scientists think is safe to burn. We have to keep 80 percent of their fossil fuels underground to keep the earth in livable shape. Here are the three numbers you shouldn’t forget:

2 degrees— Almost every government in the world has agreed that any warming above a 2°C (3.6°F) rise would be unsafe. We have already raised the temperature .8°C, and that has caused far more damage than most scientists expected. A third of summer sea ice in the Arctic is gone and the oceans are 30 percent more acidic. And since warm air holds more water vapor than cold, the climate dice are loaded for both devastating floods and drought.

565 gigatons — Scientists estimate that humans can pour roughly 565 more gigatons of carbon dioxide into the atmosphere and still have some reasonable hope of staying below two degrees. Computer models calculate that even if we stopped increasing CO2 levels now, the temperature would still rise another 0.8 degrees above the 0.8 we’ve already warmed, which means that we’re already three-quarters of the way to the two degree target.

2,795 gigatons — The Carbon Tracker Initiative, a team of London financial analysts and environmentalists, estimates that proven coal, oil and gas reserves of the fossil-fuel companies, and the countries (think Venezuela or Kuwait) that act like fossil-fuel companies equals about 2,795 gigatons of CO2, or five times the amount we can release to maintain two degrees of warming.

If McKibben’s math is right–and no one has challenged it, he told me–we will spend all of our “carbon budget” in roughly 18 years at our current rate of fossil fuel consumption of about 31 gigatons a year.

Because the fossil fuel companies are hell bent on discovering, extracting and selling as much oil, coal and gas as they can, the industry should be regarded as “Public Enemy Number One to the survival of our planetary civilization,” McKibben wrote.

When we talked, I raised a couple of possible objections to his campaign. The first is a practical one–divestment probably won’t work. To be sure, McKibben announced a small victory last week: An environmentally-oriented college in Maine named Unity College voted to sell the stocks of fossil fuel companies in its endowment, but its holdings amount to $13 million. By comparison, the endowment at Harvard, where McKibben went to school, was recently valued at about $30 billion. It’s hard to imagine major institutions turning against the fossil fuel industry.

A second objection, as noted earlier, is that most people who travel to the Do The Math rallies will get there by car.

That’s because most people have no choice, McKibben said. “There’s really no way for most of us to divest ourselves of fossil fuels in our daily life, completely,” he said. “If there is no train, you can’t take it.”

A third objection came from Rayola Daugher, the oil-industry advocate, who says focusing on U.S. oil companies will do no good because most of the world’s reserves are controlled by state-owned oil companies. (See chart below) You can’t divest from the Saudi Arabian Oil Co. or PDVSA, which is owned by the government of Venezuela, because they don’t issue stock. 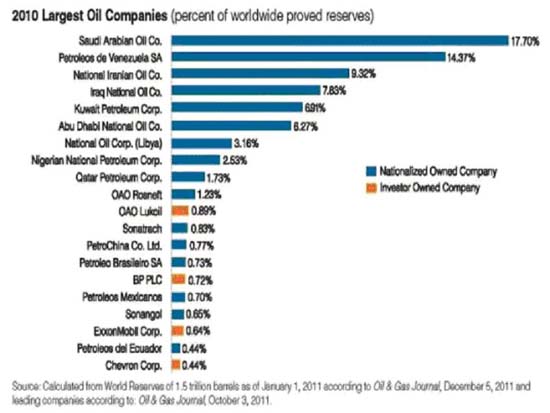 “The template has to be broader,” Daugher said. “He’s totally out of touch with energy realities.”

Of course, the American Petroleum Industry has fiercely opposed government regulation of greenhouse gas emissions – a sign that API is out of touch with environmental realities.

As it happens, McKibben and 350.org take a global approach to the climate crisis. On Nov. 10, they helped organize a day of action against coal in India and they are organizing young people in the Arab world as well.

McKibben and 350.org make three demands of the fossil fuel industry. First, companies should stop lobbying. Second, they should stop exploring for new hydrocarbons. Third, they need to transform themselves into energy companies and leave 80 percent of their reserves underground.

It’s a tall order, to put it mildly, but McKibben is undeterred.

“The warmest year in America, the epic drought, the melting Arctic and the damage caused by Sandy are all fresh in our minds,” he said. “I’ve never felt more hopeful. The movement is finally beginning to coalesce.”

Bill McKibben's lessons for business in the age of climate change