Virtual storage: A force multiplier for the U.S. military

Virtual storage: A force multiplier for the U.S. military

With an annual energy bill in excess of $21 billion, the U.S. military is the largest consumer of energy in the world. As a result of its massive energy expenditures – and because, in the words of a senior military official, the fragility of the “grid leaves Department of Defense (DoD) vulnerable to service disruptions and places continuity of critical missions at serious and growing risk” — the U.S. military has set ambitious targets to reduce energy use and deploy renewable energy sources. Unfortunately, however, the DoD has fallen short of recent facility energy intensity and renewable energy consumption goals.

The U.S. military is a leading early adopter of green building design, renewable energy, energy efficiency and microgrids because these design strategies strengthen U.S. security, and are cost effective. The U.S. Navy, for example, has set a target of having half its bases be zero net energy (and largely self-sufficient) by 2020 through a combination of energy efficiency, clean energy generation and smart controls. How the military achieves this and how it addresses power storage challenges will have a significant impact on the cost effectiveness and resilience of U.S. military installations — and will hold important lessons for the rest of the economy.

The graphic below illustrates how each branch of service plans to reduce its fuel consumption, and/or add renewable fuels and electricity to their usage over time. The Navy and Marine Corps have set the most aggressive targets. It is planning to reduce non-tactical vehicle petroleum fuel use by 50 percent and increase the use of alternative fuels 10 percent by 2015 simultaneously, and have 50 percent of its installations net zero energy with renewables by 2020 (EPAct 2005 EISA 2007, E.O. 13423). 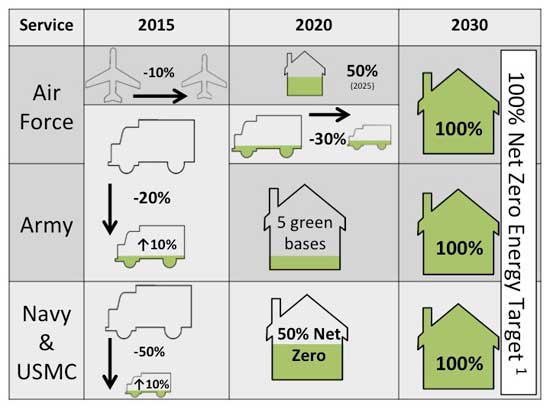 As the largest energy consumer in the world, the DoD has realized the value and practicality of energy efficiency, officially codifying it as “a force multiplier” in the 2010 Quadrennial Defense Review. This should come to no surprise to those familiar with DoD’s track record of technological innovation, which includes advances such as Geographical Positioning Systems (GPS) and the Internet.

Advances in energy — such as increasing the use of renewable energy supplies and reducing energy demand — simultaneously enhance military operational capability in forward-deployed combat environments while generating enormous cost savings to military installations. All the while, these efforts make our troops and mission critical systems more secure and reduce risks associated with climate change. As stated succinctly by Admiral Mike Mullen, Chairman of the Joint Chiefs of Staff, “Saving energy saves lives.”

Eliminating mission-essential single points of failure — i.e. "critical nodes" — in order to strengthen national defense was at the heart of the Internet’s strategic development. Similarly, the U.S. military is now adopting an energy-design strategy involving microgrids to enhance security and reduce reliance upon the increasingly brittle electricity grid. As noted recently by a senior defense official, “We see microgrids as our salvation.”

These systems will combine on-site clean energy generation, energy efficiency and smart controls to allow greater efficiency and reliability. Integral to this approach will be the use of a virtual storage approach to shed and reshape load. Intelligent controls can increase efficiency of energy usage to augment the reliability and survivability of critical functions that require power to operate.

We believe this next generation of innovation will be unique among DoD breakthroughs because the prospect for energy is, in the words of Admiral Mullen, about “not just defense but security, not just survival, but prosperity.” As recognized by Secretary of Defense Leon Panetta, we face systemic threats in the 21st century, and “The reality is that there are environmental threats which constitute threats to our national security. For example, the area of climate change has a dramatic impact on national security.” The good news according to Mullen, is that our national defense infrastructure and systems hold the potential to “help to stem the tide of strategic security issues related to climate change” while improving operational effectiveness.