Transportation can be divided into the mass transit, individual vehicle, and pedestrian categories. In previous posts I have written about the first two, in describing how bio-inspired design has improved trains and been instrumental in the development of autonomous vehicles. In this last of three themed columns in the “Getting There” series, I write about how nature might inspire a better pedestrian system.

One of the major challenges of urban transportation planning is designing the so-called “last mile” of a person’s journey, that short hop from the control and efficiency of an arterial route system to the unrestricted movements within a neighborhood or district. The success of a mass transit system, for example, depends largely on this provision for individual mobility and way-finding. Making this part of a journey faster and easier would certainly improve many lives -- and nature has a few suggestions about how to do it.

Before discussing how nature might carry you on that last mile, it's worthwhile to look at how technology does it currently. Steven Vogel, in his classic book, Cats’ Paws and Catapults, outlines the differences in these two “schools” of design. In particular, he mentions how very well we make wheels, while nature tends to bend and slide itself to mechanical advantage.

There has been an explosion in wheeled personal assistance devices in the last five years, driven by the need for cheaper transportation and cleaner air, the production of motors small enough to fit inside wheels and advances in material technology that offer strength with less weight.

The Segway is the best-known example. A two-wheeled gyroscopically balanced stand-up, it is a lean-and-go machine that can have a seat fitted to it, and comes in a four-wheel Centaur version. The Hands Free Transporter is a Segway derivative controlled by the knees and trunk motion and does not have vertical handlebars.

Commuters can also choose from a variety of electric motor unicycles (Solowheel, Enicycle, Uno-Moto, and Embrio, among others), as well as two-wheeled electric bikes and electric wheelchairs, and skateboards and scooters, plain and motorized.

elers can hang from a scooting bike frame on the Flizbike, sit atop a little wheel/big wheel electric Yikebike (left), and even be powered by the Thrustpac backpack propeller system on a skateboard or bike. The gymnastically inclined can bounce their way to work on springy stilts; Air Trekkers, Sky Jumpers, Power Striders are just a few.

Honda’s Uni-Cub is a sit-atop device that allows the user to turn in any direction and travel at standing height at 3 mph. The proprietary balance control technology and the omnidirectional wheel drive system (Honda Omni Traction Drive System) allow the rider to control speed, move in any direction, turn and stop, all simply by shifting her weight. Dismounting is easy since the rider sits with her feet a few inches from the floor.

Toyota has also entered the “personal assistive mobility device” market with a prototype it describes as a wheeled exoskeleton, the iREAL (right). This is a three-wheeled wheelchair on steroids that can adjust to two different heights and outpace a running person. 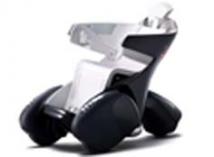 As exciting as all these designs are, they do not address some important issues. They all use wheels and therefore cannot adjust to any grade change not accommodated by a ramp. Many of them are in an awkward nether world between a motorized vehicle that belongs in the street with automobiles, and a welcome companion on the path. Almost all are designed to carry the person and not much else.

Nature does not travel typically on wheels, but on legs, and much work has been done in bio-inspired robotics. The private firm Boston Dynamics, for instance, has built robots based on four-footed mammals like the cheetah and the dog. The MIT Leg Lab has also done a lot of work mimicking the biomechanics of turkeys, flamingoes, and other animals. Little of this type of work, however, seems to have been translated to personal transportation of the civil variety.

Some robotics discoveries could be useful, though. Insights into insect biomechanics are instructive for speed and stability. Six-legged insects such as cockroaches can travel quite fast and still remain stable. Part of the reason is that the animal is always propped up on a tripod; three legs are always on the ground while three are in the air.

In the reptilian world, geckoes are able to stick to walls and ceilings by van der Waals attraction. This ability has been successfully mimicked in the Stickybot  developed at Stanford University, and taken further in the RiSE climbing robot by Boston Dynamics. The dry adhesive has even been proven in a treaded robot at the Mechanisms 'N Robotics for Viable Applications (MENRVA) Lab at Simon Fraser University in Burnaby, British Columbia.

Softbot research, like that conducted by the Whitesides group at Harvard, is yielding insights into unusual forms of motion inspired by marine invertebrates like the sea star. In one example, pneumatic tubes alternately inflate and deflate soft legs that creep across a surface or grip a delicate object.

Few devices able to support a human or carry a payload have been designed based on these capacities. Some notable exceptions are a six-legged full-scale prototype logging vehicle by the Plustech subsidiary of the John Deere Tractor Company, the ATHLETE extra-terrestrial rover prototype (left) by the Jet Propulsion Laboratory of NASA and California Institute of Technology, and the eight-legged Walking Beast by Moltensteelman.

The ATHLETE is perhaps the most instructive design because of its multifunctional capabilities. The vehicle is built to carry a wide variety of payloads on six articulated legs, roll on wheels or lock those wheels and walk on them as feet. The wheels can also drive a wide variety of tools when the appendage is raised as an arm and the whole device can be run from on board or remotely.

While there has been little translation of animal-based robotic achievements to personal mobility devices, there is one notable exception: those based on the human body. Called exoskeletons, these devices are fitted to the wearer and use a variety of powered, jointed appendages, sensors, actuators and controllers to enhance a wearer’s capabilities. In the most dramatic cases, these devices return the ability to walk to the handicapped. Much of the research in this area has been funded by military institutions like the U.S. Department of Defense’s Defense Advanced Research Projects Agency (DARPA).

The XOS 2, by Sarcos/Raytheon, developed as equipment for the foot soldier, weighs about 150 pounds and allows a user to lift 200 pounds with little effort. It was named one of the Best Inventions of 2010 by Time Magazine. Sensors detect contractions of a human user's muscles and use them to operate a series of valves. These valves regulate the flow of high-pressure hydraulic fluid to the joints, which move cylinders and cables to simulate the tendons that activate human muscle.

The HULC (Human Universal Load Carrier) by Ekso Bionics/Lockheed Martin weighs 53 pounds and has a comparable carrying capability through the use of an independent backpack. The HAL 5 (Hybrid Assisted Limb) by Cyberdyne  is a full-body cyborg suit that senses electrical messages from the brain, rather than muscle contractions. The wearer can move the exoskeleton by the same intuitive process that he moves his own muscles. Rex (Robotic Exoskeleton Legs) by Rex Bionics of New Zealand weighs 84 pounds and allows those previously confined to a wheelchair to stand up and move about in a variety of directions and surface situations. eLEGS by Berkeley Bionics is a battery powered wearable robotic for the paraplegi 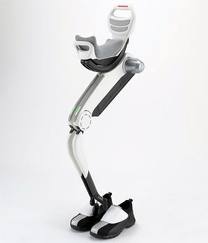 While most of these devices have been geared toward orthotic or military high performance use, some are being developed for the able-bodied civilian. Honda, for example, is developing a walking assist device, Exoskeleton Legs (left), a user wears between the legs and sits on. It uses spring action to boost walking power. Cyberdyne, as another example, is promoting the HAL device [Aaron - can you find a link and/or image for this] for use by medical, rehabilitation and emergency response workers, and rents it to facilities in Japan where the elderly, stroke victims and other marginally mobile patients have also been outfitted with the suit. Trimmer versions of such a suit could eventually find their way into the able-bodied market.

Bionic personal mobility aids will likely become more common in the future, but challenges remain: weight, limited run times, integration of joints and fine motor control among them. Still, there is a growing market for such devices for an aging population and an increasingly urban and energy-strapped world.

If the current nature-based prototypes can be refined to reflect the demands and spatial limitations of this world, there is a huge potential for an adaptive individual transportation mode. This mode will be at the personal scale and it will adjust to the infrastructure of a city, rather than be fitted to it.

Whether on wheels or legs or in an exoskeleton, the revolution in individual mobility will progress. When it does arrive, you can be certain that nature had been studied to achieve it.

Photo of green leaf with gecko provided by winui via Shutterstock.

Insect gears could change the way you look at engineering