One of the most debated topics in communication ethics these days revolves around the roles of reason and emotion in decision making. More precisely, is it thoughtful reasoning that leads to meaningful attitude change, or is it automatic intuition? And by extension, which has greater impact on behavior? This debate may seem academic, but it is of vital interest to environmental communicators. Should green messages focus on strong rational arguments, or is it more effective to emphasize under-the-radar emotional appeals?

Dr. Jonathan Haidt, a psychologist at New York University, makes a strong case for the role of intuition in his best-selling and much-discussed book The Righteous Mind. This book was the subject of a recent dialog in The Stone philosophy column in The New York Times. Gary Gutting (University of Notre Dame) and Michael P. Lynch (University of Connecticut) opined on Haidt’s ideas from a philosophical point of view, and Haidt was provided an opportunity to respond. The reason-emotion debate has been bubbling to the surface since Darwin and Freud revolutionized thinking about the genesis and operation of the human mind. These essays by Lynch and Gutting, and the response by Haidt, situate this discussion in the context of philosophy, social science and politics.

But there is another critically important domain in which the ideas of Darwin and Freud have been effectively and practically advanced in the past 100 years, a domain that is central to any conversation about ethical communication and fostering productive public debate: advertising.

While social scientists and philosophers must painstakingly build empirical and logical support for their theories and arguments, advertisers just go with what works. Emotion works. While peer-reviewed journal articles and books take months or years to come to fruition, marketers roll out and cancel campaigns on a dime. For these practical reasons, advertising professionals have been out in front using new methods and approaches to persuasion; researchers follow up with empirical evidence and theories that explain and predict why the new techniques are so effective.

The relationship between practitioners of persuasion and students of psychology has a long history. Edward L. Bernays, in many ways the father of modern public relations, was Sigmund Freud’s double nephew (his father’s sister was married to Freud and his mother was Freud’s sister). Bernays helped bring Freud’s writings to U.S. audiences and used his theories to promote public relations as an effective and indispensable business practice. After WWII, Ernest Dichter, another native of Vienna with a doctorate in psychology, became the “father of motivational research,” further advancing the notion that appeals to the subconscious are the key to effective persuasion.

Next page: Heart and head do not agree

Advertising has been at the forefront of non-conscious persuasion, and understanding its effectiveness can add important perspective and context to Haidt’s work on intuitive ethics and communication. In his October 7 essay in The Stone, Haidt used a four-quadrant epistemological space to illustrate the roles of reason and emotion in decision-making. On this two-dimensional map, reason is on the vertical axis and emotion the horizontal. When intuition and reason are aligned as to whether an object is good or bad, you have certain knowledge. When they are at odds, you’re dumfounded. Heart and head do not agree.

Dr. Haidt goes on to explain that persuasive arguments might be able to move the needle on the vertical axis (reason) but they have virtually no chance of making a difference on the horizontal (emotion). At best, Haidt points out, arguments can make you dumfounded (your head can’t explain why you feel the way you feel), but they won’t change what you believe in your gut (your intuition). 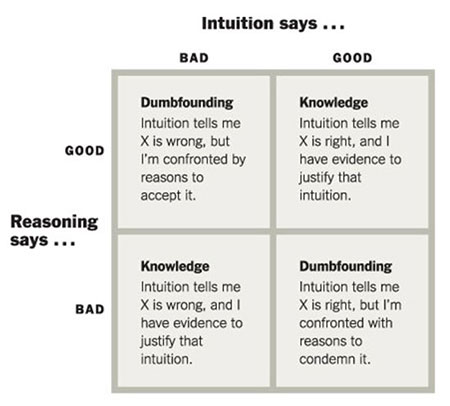 If persuasive arguments can’t move people along the horizontal (emotional) axis and change their intuitive beliefs, what can? The answer is persuasive advertising.

Modern marketers impact preferences and decision-making not with arguments, but with emotions. Not with facts, but with metaphors. Not with statistics, but with images. As adman David Ogilvy pointed out, the best advertising is the advertising that sells without selling. That is, as soon as a message begins to argue, its chances for success are diminished. To paraphrase the media scholar Neil Postman, effective advertising does not argue why a brand fulfills a particular need, it merely displays the brand that fulfilling that need. If there is no argument, there is nothing to argue against.

Haidt uses the example of gay marriage to make his point that “arguments don’t work.” People were not moved on this issue by argument, but intuitions changed over time because a younger generation was consistently presented with a world in which gay marriage was not threatening (both in their own lives and in media representations of gays). There was nothing to argue against, and intuitions changed. In the case of gay marriage, intuitions were changed in a large part by entertainment-based communication. But past successes in advertising campaigns have proven that long-term image advertising is another effective way to non-consciously alter perceptions in powerful ways.

Understanding the power of persuasive advertising when it comes to changing peoples’ intuitive evaluations of objects (consumer products) and issues (public policy) does not, however, solve the ethical dilemma. The use of non-conscious appeals goes unnoticed most of the time. But when you shine a light on it, most people view it as underhanded “subliminal” messaging that is akin to “brainwashing.” It seems a bit tawdry at best and exploitative at worst. The last thing we want is an unreported war of non-conscious persuasive messaging pushing and pulling audiences along the emotional dimension of decision-making.

Unfortunately, this is exactly what we have.

Balkanized media promote themselves to particular audiences by using code words and metaphors that resonate with and reinforce certain worldviews. Political advertisers continue to adopt marketing techniques that favor the emotional over the rational, and place identity ahead of ideas.

As Haidt (and many others) suggest, democracy can only be served by calling a truce on the emotional dimension, and agreeing to base public policy debate on reason. In this, it seems, Haidt is in agreement with traditional moral philosophy. A critical first step toward this kind of public-sphere debate is to take a hard look at how we judge the morality of persuasive messages. Just as our evaluation of ethical decision-making should reflect a more modern understanding of the role of intuition, so must our ethical evaluation of persuasive messaging.

Most ethical evaluations of persuasion focus exclusively on the “truthfulness” of the message. They look only at the dimension of reason. This approach is reflected in the constant fact-checking of political statements, messages and advertising. The rational part of the brain becomes obsessed with the rational, while the non-conscious persuasive elements escape scrutiny. (Perhaps the Romney campaign was ahead of the curve in saying it won’t be constrained by fact-checking!)

This basic tension is reflected in the hotly contested idea of “greenwashing,” a blanket label often applied to any corporate-sponsored message that includes an environmental claim (expressed or implied). The message sponsor carefully checks the facts to make sure it is accurate, and therefore sees the message as perfectly legitimate, and as promoting a social good. (There are certainly bad actors who disseminate green falsehoods, but those transgressions are no different from any other type of untrue or misleading communication.) Critics, on the other hand, consider the use of the environment to promote corporate interests as an unfair emotional manipulation of the audience (whether the objective facts presented are accurate or not).

Can these conflicting evaluations of green messaging be reconciled within a coherent communications ethics framework?

What I propose is not an all-advertising-is-bad critique. Like it or not, advertising and persuasion are not going away. In addition, non-conscious advertising employed to sell one brand of potato chip over another is relatively harmless. (Many critics would argue otherwise, but that is a different dilemma.) Non-conscious messaging in the arena of public policy, where only reason can lead to maximally beneficial social solutions, is another matter. Environmental communications certainly fall into this category of strategic messages.

As in the evaluation of ethical decision-making, an epistemological space is useful in the ethical evaluation of advertising. I have proposed an ethical map that looks at persuasive messaging (advertising in particular) in terms of the level of non-conscious appeal (vertical dimension) and issue publicality. Messages are not strictly emotional or rational, but rather can be seen as falling on a continuum from the purely rational and informational to the purely emotional and values-based. Issues can also be seen as lying on a continuum that ranges from not at all in the center of public debate (potato chip brand preference) to issues that are at the highly-contested center of public debate (what to do about the environment). 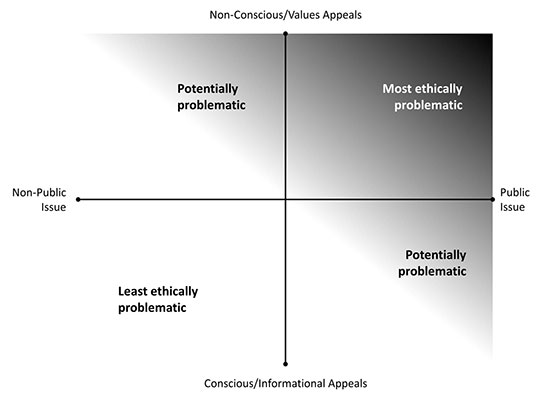 As this ethical mapping suggests, purely informational messages are always ethical. In addition, non-conscious messages can be ethical, but not when they are engaging issues central to current public policy debates. This type of ethical evaluation presents a useful framework that can help to move public policy debates into the realm of reason.

Media, marketers, industry interests and politicians will continue to employ emotional appeals that powerfully shape public moral intuitions. It works. We need to shine a light on these practices and make the case that the public policy domain is too important to be the province of under-the-radar persuasive techniques.

How sustainability messages break through with busy shoppers

Is green marketing a luxury for good economic times?

Earth Day's over: Now let's get serious about the battle for Brand Green