From GreenBiz (of course) to Forbes to Fortune, Bloomberg to The Wall Street Journal, a young company named Mosaic has been getting a lot of attention of late. Why? Because Mosaic is bringing crowdsourced funding to the world of solar PV.

Crowdfunding is nothing new. Companies such as Kickstarter have allowed individuals to fund everything from their next indie film to extensive out-of-pocket medical bills with pooled donations from family, friends and other supporters. But thanks to last year's JOBS Act, debt-based crowdfunding is now an option as well, in which investors come together to fund startups and small businesses in return for repayment plus interest in a company like Mosaic.

It's inclusive, meaning that investors of all shapes and sizes can get into the game. And it currently makes for a good, low-risk investment. Mosaic — with more than $1.1 million invested in solar projects to date — boasts 4.5 to 6.5 percent risk-adjusted annual returns, besting the latest interest rates on 30-year Treasury bonds.

But much of the crowdfunding solar coverage underemphasizes a key point: Funds raised from the crowd — in addition to providing attractive returns for investors and enabling more solar installation period — also have the potential to lower the cost of electricity from solar PV systems in the here and now.

Imagine for a moment that a credit card company issues a card with a $200,000 limit. Next, let's imagine a homeowner taking that card and buying a new home for $200,000 with a 30-year term, just like most home mortgages. This lucky homeowner just bought a new home for $0 down!

There's a problem, though. Financing a home purchase with this hypothetical credit card is a seriously bad deal for the homeowner since the annual interest rate would be 13 to 15 percent, according to Bankrate.com, which translates into extremely high monthly payments. Instead, most homeowners finance homes on 30-year terms with more reasonable interest rates in the 3 to 5 percent range. Such inexpensive, single-digit bank debt is a key to making the financing work, since the cost of the debt is a huge factor in the overall cost of the purchase over the term of the deal.

Just as financing solutions like credit cards and home mortgages help families buy new appliances and homes, several different finance solutions are helping solar energy systems be deployed on homes and businesses throughout the U.S. today. In fact, about 75 percent of residential solar photovoltaic projects and 40 percent of commercial ones are financed with different "third-party ownership" models where electricity users install a solar system with little to no money down and start saving money from day one.

But the capital used to deploy these third-party-owned solar projects has an effective interest rate that looks more like that of a credit card than a mortgage. This translates into high monthly payments for electricity from solar systems — just like a homeowner making steep payments on a credit card in the home purchase example. Although it's not the only factor at play, high interest rates (closely related to "costs of capital") are one of the big reasons we only see lots of solar in places like Hawaii (where residents pay the highest electricity rates in the nation), but not Kentucky: Solar developers can only produce savings for customers in areas with a combination of high electricity rates, good sunlight and attractive local incentives — think California and Arizona, two leading states nationwide for total installed solar capacity.

For folks interested in deploying as much solar in the U.S. as quickly as possible, this is a problem. Right now, the capital structure behind most solar projects in the U.S. is prohibitively expensive for the economics of solar to pencil out in most of the country. So we've got to help make capital for solar projects look more like home mortgage loans than credit card debt.

There are a number of ways to do this, but many of the most popular solutions, such as master limited partnerships and solar-specific real estate investment trusts, require regulatory and/or federal legislative changes and aren't likely to become large-scale solutions in the near term. However, there's one solution that's already upon us — crowdfunding. 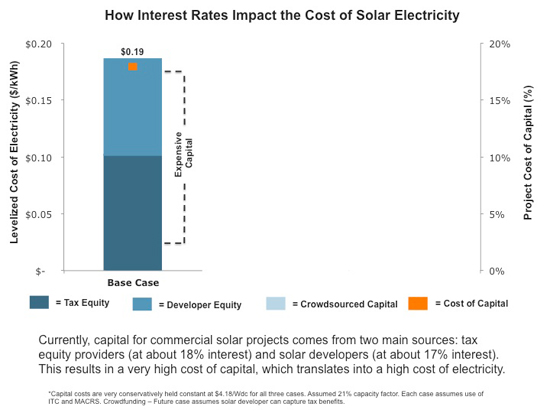 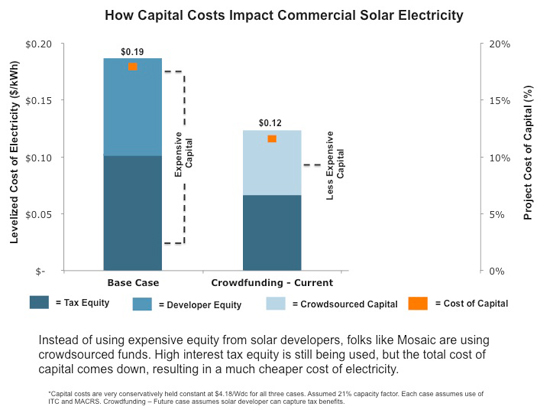 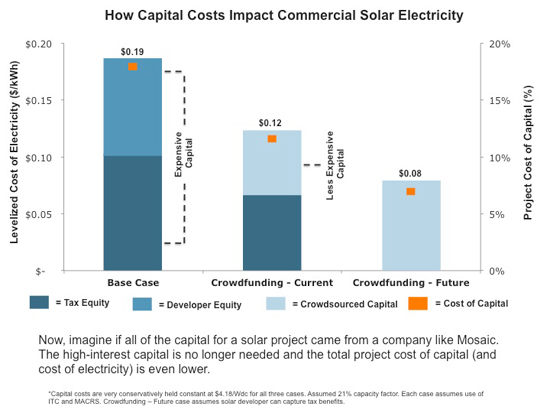 As shown in the pictures above, the "credit card-like" capital that's currently used for solar projects is composed of expensive equity from two sources: tax equity investors (companies able to absorb the tax benefits associated with solar projects) and solar developers. This equity is expensive and, in simple terms, has an effective interest rate of more than 15 percent. This translates into high a high cost of electricity from solar systems.

But this is where groups such as Mosaic step in. Expensive tax equity is still used to pay for about half of a project, but instead of using equity from the solar developer, crowdfunding providers can step in with funds from the crowd. Capital raised from the crowd has a much lower interest rate (~6.5 percent) than equity put in from a solar developer (~15 percent), so the combined interest rate for the solar project goes down, along with the cost of electricity from the solar system.

Finally, at some point in the future we could imagine crowdfunding companies providing all of the capital for a solar project. This would mean a very low interest rate on the entire project and a very low cost of electricity from the solar system.

There are a number of different solutions in development that will help lower interest rates associated with solar PV financing. But crowdfunding excites me for one main reason: It's here now. And if we're to get on pace to realize Rocky Mountain Institute's vision of a secure, low-carbon and affordable U.S. electricity system by 2050 as outlined in "Reinventing Fire: RMI's Quest to Foster a Future Free of Fossil Fuels," we need solutions that drive deployment of existing technology as soon as possible.

How PACE Affects the Future Financing of Energy-Saving Projects