How to succeed a chief sustainability officer

How to succeed a chief sustainability officer

Last week, Weinreb Group published its updated list of chief sustainability officers. While we identified eight new CSOs, we also identified two second CSOs: Ezra Garrett from PG&E and Shawn Heath from Duke Energy. Our 2011 report, "CSO Back Story," identified Diane Holdorf of Kellogg as the first-ever second CSO — the first CSO to succeed another in the same position.

If much was expected of those in this challenging role the first time around, imagine the pressure on those who follow in the first CSO’s footsteps to be even more innovative and move the sustainability needle even further. I spoke to three second CSOs, who generously offer readers their insights.

Confessions of a replacement CSO

As a recruiter, I know that replacing a CSO is no easy task. The CSOs I chatted with gave us an insider’s perspective as to how they were selected for the role.

Holdorf succeeded Celeste Clark as CSO of Kellogg. Clark left a tremendous legacy when she retired after 34 years with the company. She had a broad spectrum of responsibility, including nutrition and health issues. Both Holdorf and Clark had been working together on sustainability so it only seemed natural that Holdorf would replace her. Once Holdorf had been identified, they worked side by side for six months on the transition.

Heath had a similar transition once he was named to succeed Roberta Bowman upon her retirement. The added layer for Heath was Duke Energy’s merger with Progress Energy. In this case, the CSO replacement was part of the merger integration process. Heath was one of several candidates to interview for the role. 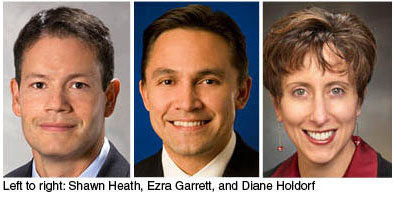 Since the merger closing was delayed by regulatory approvals, Heath had the advantage of working with Bowman as well as the entire sustainability department for several months prior to Bowman’s retirement. “I was not formally a member of the sustainability department during that time, but the opportunity to climb the learning curve during this period was tremendously valuable. Bowman was gracious enough to invite me into her staff meetings, and she even requested that I physically locate within the department as a means of getting to know the team better,” recalls Heath.

Garrett says that approaching Steve Kline’s retirement as CSO of Pacific Gas & Electric Co., the company conducted an extensive benchmarking study looking at best practices to determine where within the enterprise the CSO role could provide the greatest impact. “Our primary goal was to implement a more expansive view of sustainability that includes environmental performance as well as economic vitality, and social responsibility,” says Garrett. “We also made it a priority to further integrate PG&E's corporate sustainability program into our core operations and enhance our stakeholder outreach and employee engagement.”

They ultimately concluded that the community relations function, which Garrett leads as vice president under corporate affairs, was the best place to position PG&E to most successfully achieve these goals from an organizational perspective.

While the replacement CSO will build on his or her predecessor’s accomplishments, the departure of the first CSO creates an opportunity for change. The successor must recognize how he or she is uniquely qualified for this position and how those unique qualities are different from the predecessor’s.

Garrett took sustainability in a broader direction for PG&E. When Kline created and stepped into the first CSO role, the job was primarily focused on environmental policy and leadership. Kline was the Washington, D.C.-based VP of corporate environmental and federal affairs. His skills, talents and relationships with the environmental community were the right formula to spearhead sustainability for the company.

“What differentiates my challenge in the CSO role today is that with the foundation established, we must now focus on further broadening PG&E's sustainability definition, deepening the integration of sustainability into the business,” says Garrett.

As Duke Energy’s first CSO, Bowman was successful at deploying the activities of the sustainability department. “Frankly, she handed over the keys to a very well-oiled machine, with robust programs and a strong team,” Heath states. He says the transition was made easier by the fact that he and Bowman have very similar views in terms of the role of sustainability and how it creates value for a company and its stakeholders.

Even though Heath came into the CSO role being aligned in this way with Bowman, “I think it is valuable — in fact, necessary — to take a fresh look at things in hopes of finding new ways to advance sustainability within the company. As sustainability professionals we must practice what we preach, which means that a continuous improvement mindset should always guide our actions,” he says. For a CSO and his or her department to stay relevant, the goals and priorities of the sustainability program must continuously evolve.

Holdorf thinks it’s exciting to fill a CSO’s shoes. “On one hand, the position is established and understood, and on the other hand I have had the opportunity to develop, evolve and scale the role,” she says. For example, Kellogg’s looked at the carbon and water footprint of their foods and knew it needed to increase its work with farmers and sustainable agriculture. Holdorf has seen her team expand, especially as employee engagement became critical in their progress to achieve the environmental reduction goals in their manufacturing plants. At Kellogg, under Holdorf’s leadership, the team has formalized its structure, added staff and developed further programs.

Advice for CSOs planning their succession

Heath has two pieces of advice to those CSOs seeking out their successor. First, don’t look for someone who is a mirror image of yourself. Second, make sure that the next CSO has the relationships necessary to serve in a role that often is based more on influence than authority.

Holdorf believes that in addition to requiring that your replacement have the technical skill set to be CSO, one should look for someone with the ability to, as Heath also recommends, lead through influence. In addition, she says a CSO doesn’t necessarily have to be someone from inside the company. “I had joined in 2008 as VP of environmental stewardship, health and safety, and prior to that I had done 18 years in global consulting.” In this way, Kellogg was willing to look outside the box for someone to take over the role that came from a different background.

How to succeed a CSO

From the other side of the table, we asked our succeeded CSOs if they had advice for those coming into the CSO role as a successor.

Heath recommends taking inventory of the internal and external landscape of one’s business before making any big decisions on objectives and priorities. “Get to know the team, get feedback from internal stakeholders and acquire a deep understanding of the external forces that are shaping your company’s sustainability agenda,” he says.

Holdorf insists that the most valuable piece of advice is that a person much have a zeal for sustainability. “We all have a passion and want to make a difference, a real need to drive connection to the business value,” she explains. CSOs should also connect the role back to what is unique to them as a company because that is what resonates for stakeholders.

Garrett shares this perspective. “A new CSO must resist the tendency to default into the same strategies and focus of his or her predecessor,” he says.

Image by smonkey via Shutterstock

The sustainable responsibility of Kellogg Company

In Search of the Elusive Chief Sustainability Officer

Is There a CSO in Your Company's Future?