Cut the wrap: How to reduce hospital waste and emissions

Cut the wrap: How to reduce hospital waste and emissions

On average, Saint Marys Hospital at the Mayo Clinic in Rochester, Minn., produces six compactor loads of waste per day, all of which have to be hauled to an incineration facility for disposal. “This is a huge volume of material being generated across the facility, much of it as a single-use waste stream from our sterilization processes,” says Kevin Hovde, operations manager of hospital surgical services.

It’s not alone: Sterilization wrap makes up as much as 20 percent of the surgical services waste stream and 5 percent of the total waste stream in some medium to large hospitals, according to a University of Minnesota Medical Center fact sheet. Health care facilities often use sterilization wrap -- also called disposable surgical wrap or blue wrap -- to wrap surgical instruments during sterilization, a critical procedure to help minimize patient infections during surgery. The disposable sheets made of nonwoven polypropylene, an inert polymer derived from petrochemicals, allow the sterilant -- usually steam -- to penetrate and sterilize the instruments. That steam, in turn, causes structural changes to the wrap that prevent the entry of microbes and contamination after sterilization, while the instruments are being stored.

Health care facilities also have a second option: A reusable hard case often made of aluminum. These hard boxes also have a small piece of nonwoven polypropylene to allow the sterilant in. That small piece, which makes up a fraction of the weight of a full blue-wrap sheet, still needs to be replaced every time the box is used. Like the disposable wrap, the hard case also maintains the sterility of the tools until they’re used.

Either way, the sterilization process costs health care facilities considerable annual expense. There’s the ongoing purchase of the single-use wrap or the high initial cost of the reusable sterilization cases. Handling and storage requirements also can deter some facilities from opting for the cases.

Last year, the Minnesota Technical Assistance Program, or MnTAP, partnered with researchers at the University of Minnesota’s bioproducts and biosystems engineering department -- as well as a surgical services division at the Mayo Clinic -- to assess the lifecycle environmental impact of both reusable cases and disposable wrap at the Mayo Clinic.

The results from this comprehensive analysis indicate that reusable sterilization containers yield significant environmental advantages over disposable sterilization wrappings. Instrument sterilization using reusable cases emits roughly half the greenhouse gas emissions of using disposable wrap, while generating just 12 percent of the solid waste, even when only the first year of use is considered.

The research also revealed that reusable cases create 12 percent of the solid waste of disposable wraps. Packaging and the single-use disposable components of the hard-case system contribute to the 650 kilograms per year of solid waste generated by these hard cases, if 100 cases are used each day of the year for 36,500 surgeries.

But they still add up to a burden that’s eight times less than the 5,600 kilograms per year generated from the amount of wrap -- 36,500 pieces -- needed to complete the same amount of sterilization in a year. The wrap itself accounts for 74 percent of the total solid waste -- 5,600 kilograms for each 1.22-square-meter sheet -- generated over a year, with the rest coming from packaging and sterilization accessories. 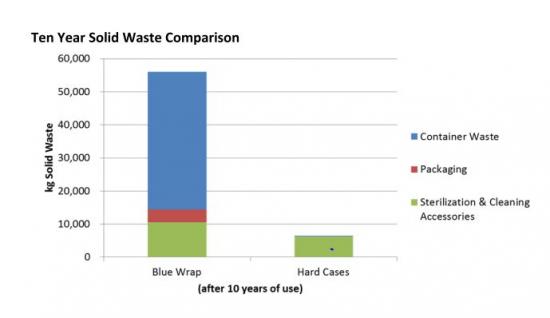 By comparing the environmental impact of disposable wrap and hard cases, researchers aimed to provide the health care industry with more information about its choices in order to aid decision-making and -- they hope -- promote pollution prevention. The study, which is part of MnTAP’s overarching goal of providing pollution prevention assistance in Minnesota and which received funding from the U.S. Environmental Protection Agency Source Reduction Assistance Grant Program, assessed the cradle-to-grave environmental effects of both types of sterilization containers.

This included environmental impact during raw-material extraction, product manufacturing, product use and end-of-life disposal. The wrap use assessment was based on standard procedures that reduce the environmental impact because they minimize the requirements for deep cleaning. Reusable-container production impacts were estimated using vendor data, when available, and database information for like production processes.

Of course, health care facilities aren’t basing their decisions solely based on the environment. They also must weigh additional factors -- including cost, storage space, material-handling infrastructure and the complications involved in using various-sized tools -- when deciding whether to use hard cases or blue wrap. Aside from those factors, there may be additional environmental consequences to take into account, such as effects on air and water quality.

But this additional information could help tip the equation in favor of hard cases for some health care facilities. Saint Marys, for instance, has been steadily adding hard cases to its surgical services department.

“When the analysis was completed, we were amazed at how much impact this change could have in our environmental profile, both from a GHG and solid-waste perspective,” Hovde says. “A wide variety of factors go into the product-procurement decision-making process, and we’re now able to include environmental impact as an additional factor for consideration.”

Students Give Kimberly-Clark a Lesson in Design Thinking