Few people think of the fashion industry as a heavy industry like steel or cement. However, dyeing and finishing fabric has an enormous environmental footprint, using large quantities of chemicals, as well as extensive steam and rinse water. The industry is one of the highest-ranking industrial water polluters in the world. Greenpeace recently has targeted it to radically reduce its chemical use.

Here is NRDC’s 5-step program for companies that are serious about phasing out their reliance on toxic chemicals. It’s a blueprint framed around the Greenpeace’s Detox Campaign, which calls for the phase-out of 11 categories of toxic chemicals in textile manufacture by 2020 and has provided a much-needed sense of urgency to the apparel industry to change the way it does business around the world. Despite an explosion of collaborative consultations and meetings among brands and retailers (see Roadmap to Zero), the companies that have committed to comply with the Greenpeace campaign to date -- and the many others living in fear of imminent Greenpeace targeting -- have not come forward with work plans that inspire confidence they will get the job done. 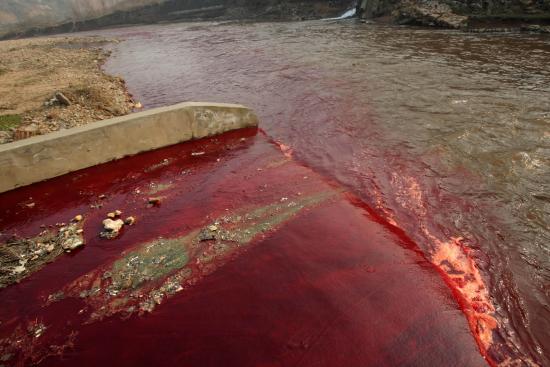 Photo above taken Dec. 13, 2011: China’s Luoyang¡¯s Jian River becomes contaminated with dye from discharge of untreated wastewater into storm water pipes. The workshops were shut down that day. Photo by Zhang Xiaoli/ChinaFotoPress

So, for those companies committed to phasing out their reliance on toxic chemicals, here’s how to do it:

1) Create reduction goals that are results-oriented (not process-oriented), with explicit dates and milestones for achieving reductions.

Current pledges to “convene a group,” “explore platforms,” “provide updates,” “create roadmaps,” “demand collective action,” etc., fall far short of what is needed to deliver change on the ground. These commitments are the HOW, not the WHAT.

2) Start at your vertically integrated facilities -- factories that dye fabric and cut and sew your garments.

These are your easiest targets because you have ongoing direct contract relationships with these factories. Fortunately, these facilities often represent large and important strategic suppliers as well, which will enable you to make a big impact through activities in a small number of places.

Some of the world’s most dangerous chemicals -- notorious around the world and already targeted by many government and international programs; what I consider the "dead chemical" list -- are the easiest to target and should be eliminated right away. Specifically, chlorobenzenes and chlorophenols, as well as azo dyes which form prohibited amines, have been on the Restricted Substance Lists for responsible brands for some time and are thought to be largely out of use in the textile industry. Brands should commit to a 2014 firm phase-out for these chemicals already out of use.

Similarly, the brominated and chlorinated flame retardants, chlorinated solvents and short-chained chlorinated parafins (SCCP) should prove relatively easy to phase down. A 2015 phase-out goal for these three categories might be feasible.

Those chemicals/formulations without currently viable alternatives should be scheduled as the last to go to allow time for research to take place.

Photo of jeans on shelf provided by Dmitry Kalinovsky/Shutterstock

Apparel companies rightly point to the hundreds of factories and fabric mills that supply their goods as a main stumbling block to quick implementation of any new rule book. However, most agree that, if they look, a much, much smaller universe of fabric mills provide the bulk of production. Brands should target the biggest mills first, then move to the smaller operators later. I suggest developing "80/20 plans,” which initially target 80 percent of production, for example, or 80 percent of cotton/blend production, 80 percent of denim production, etc.  Fill critical information gaps with two types of research: the chemical composition of commonly used formulations and the alternative formulations that are available.

Many mills use formulations without knowledge of their chemical composition, or they buy “off brand” products without realizing they are poor substitutes. Brands must step up to the plate here (either alone or in collaboration) and test the products used at their mills. They should ask their mills to send samples of the products and formulations they use and send those samples to a laboratory for a scan of the Greenpeace chemical categories. Collaboration across brands clearly would be useful here, such as creating a third-party repository and a single list of banned products, if -- and only if -- companies can coordinate quickly enough to ensure that they meet their reduction deadlines.

4) Research to identify alternatives is also crucial for the change we need to see in the industry by 2020.  Again, collaboration across brands clearly would be more efficient for the industry, if it is possible to get this up and running expeditiously.

With results in hand, retailers/brands should then provide an explicit list of the formulations that contain banned substances to the mills, with dates for their phase-outs, as well as a list of preferred chemicals and formulations. This will provide a clear path forward for factories to transition away from problem uses.

The only way to make the Greenpeace commitments real is for the sourcing team to contractually require them, with consequences such as suspension or termination of business for failure to do so. In fact, the sourcing team needs to own the Greenpeace commitments, not the CSR shop. Any phase-out plan owned and operated solely through the CSR shop will fail to deliver results. This approach is very different from the “we’re-all-in-this-sustainability-journey-together” mentality that many companies have brought to their CSR work to date and that often requires changes in hierarchies, ownership and management.

Conclusion: Why it's all worth it

There is no doubt that implementation of the Greenpeace commitments is a challenge for the industry. Most brands know their Tier One garment (“cut and sew”) factories, but not the Tier Two fabric dyeing and finishing mills, which is where the chemicals of concern are used and released. Traceability of products through the supply chain is an ongoing challenge, which, to date, has been focused largely on small, special product lines (such as organic cotton) and not the bulk of wet processing production. Until now, chemical concerns have been limited to chemicals on the residue of clothing (Restricted Substances Lists from AAFA.pdf) and not on the chemicals used and released in manufacturing. And, let’s be honest with ourselves: Only a very small handful of retailers and brands have ever even once assessed overall wastewater compliance at their fabric mills, let alone overseen or enforced a program limiting specific chemicals used and released at these sites.

However, we can also all agree that the curtain is rising on the problems being generated by textile manufacturing in China and elsewhere in the developing world. International groups such as Greenpeace are routinely showcasing problems to worldwide attention and acclaim (Hidden Consequences.pdf), and NGOs such as the Institute for Public and Environmental Affairs (IPE), are quickly developing an increasing head-turning capacity in an information-starved China by outing problem factories across that nation in a highly accessible way (IPE's Cleaning up the Fashion Industry and IPE's The Other Side of Apple Report.pdf). Given the ready access the public has to the Internet and social media around the world, it is becoming increasingly difficult for multinationals to maintain a credible reaction of surprise and dismay to public exposes of the environmental damaged caused by factories in their supply chains around the world.

From this perspective, the Greenpeace campaign can be seen as a much needed makeover for the fashion industry, and NRDC’s 5-step blueprint as the way to get there. And it is an important incentive to the other industries manufacturing the pharmaceuticals, paper, furniture, plastics and other consumer goods we use every day. If you can manage a supply chain to deliver high-quality products on time and at low cost from hundreds of factories to thousands of retail outlets around the world, it also should be possible to ensure that those factories are minimizing the damage they cause to the air and water in their surrounding communities.

Public expectations of industry are high and rapidly rising around the world, and the fashion industry -- so highly respected for its creativity, vision and power of persuasion with consumers -- is well-suited to take the lead in responding to the public in this brave new world.

How Eileen Fisher, other brands are rinsing toxics from clothes

How the fashion industry can avoid its own Foxconn