Richard Branson, Puma's Zeitz kick off 'Plan B' for business

Richard Branson, Puma's Zeitz kick off 'Plan B' for business

This story originally appeared at BusinessGreen.

Sir Richard Branson and Puma chairman Jochen Zeitz have launched a major non-profit group, The B Team, to promote a new set of progressive business values that "prioritize people and planet alongside profit."

The group brings together high profile business and political leaders, including Arianna Huffington, Unilever's Paul Polman, Ratan Tata of the Tata Group, United Nations Foundation President Kathy Calvin and former Irish President Mary Robinson. These so-called "B Leaders" have pledged to work on the development of a "Plan B for business" that seeks to address the growing challenges businesses and societies face, such as high unemployment, global inequality and the unsustainable use of natural resources.

"Today we want to start a global conversation on a 'Plan B' for business," Branson said in a statement. "We are working with government agencies, the social sector and business leaders to help get on top of some of the world's seemingly intractable challenges. We are keen to listen, learn and share with others to build businesses that do what's right for people and the planet."

Zeitz, responsible for pioneering the development of the world's first corporate environmental profit and loss accounts at Puma, said the new group's goal was no less than to redefine the way businesses operate.

"Business is integral to society, but it has also created most of the negative environmental challenges of this century," he said. "The B Team will help to catalyse a shift away from the existing short-term, unsustainable mindset towards the long-term interest of people, the planet and the wider economy. Tackling these three challenges is a starting point for a 'Plan B' to form." 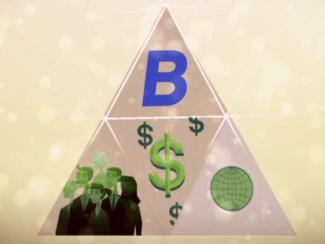 The precise nature of the group's work remains vague, but it has set out three challenges that it wants to address as a matter of priority. Working under the banners "Future of Leadership," "Future Bottom Line" and "Future of Incentives," the group will investigate how to promote a less short termist and more inclusive approach to corporate leadership, expand corporate accountability to take account of environmental, economic and social impacts and improve corporate and economic incentive structures to remove harmful subsidies and promote responsible behavior.

"The evolution of business leadership away from a focus on short-term profits is essential for the future generation of leaders," Huffington said. "We need a 'Plan B' for the way business is managed, starting with leadership more committed to well-being, wisdom and sustainable business success."

The group, which hosted a live online broadcast this week to over 200 gatherings in 60 cities around the world, also released a joint declaration setting out its goals and priorities.

"The private sector can and must redefine both its responsibilities and its own terms of success; a Plan B for concerted, positive action that will ensure business becomes a driving force for social, environmental and economic benefit," the group stated, adding that global society faces severe challenges in terms of resource scarcity and continuing inequality. "While there are myriad reasons we've arrived at this juncture, much of the blame rests with the principles and practices of 'business as usual.'

"These are not the outcomes we envisioned as we grew our companies; this is not the dream that inspired us. And the overwhelming conclusion we've reached is that businesses have been a major contributor to the problems, and we as business leaders have the responsibility of creating sustainable solutions."

The declaration stated there was no alternative but for business leaders to develop a new approach, which in many ways would constitute a new form of capitalism.

"Our vision of the future is a world in which the purpose of business is to become a driving force for social, environmental and economic benefit," the declaration states. "Our mission is to help develop a 'Plan B' that puts people and planet alongside profit. Plan A -- where companies have been driven by the profit motive alone -- is no longer acceptable."

The group also calls on other business leaders to join them and sign up to its vision. "As business leaders, we know that what we're proposing will be a challenge, or even an affront, to many of our colleagues and competitors," they said. "But we're confident that those who choose to work with us will see that in the long run, what's better for the planet and its people is also better for business."

What Google can teach us about innovation in sustainability