One of the best-backed players in the smart glass industry, Sage Electrochromics Inc., is making some of its first deliveries from the world's largest electrochromic glazing plant, one capable of producing up to 4 million square feet of glass annually.

The technology produced there, called SageGlass, comes with a coating that can be tinted electronically according to lighting levels, controlling solar glare and heat gain, in turn cutting energy costs. The technology is backed by more than 250 patents and could play a role as part of smart building applications aimed at improving efficiency and conserving electricity and water.

Just as important as the volume of glass that this particular plant can produce is the size of individual panels that can be manufactured at the new $150 million, 324,000-square-foot facility in Faribault, Minn.

The panes are now available in sizes up to 5 feet by 10 feet, which greatly expands the design and architectural applications that are possible, making them much more commercially viable for curtain walls, skylights and windows.

Panel sizes have held back dynamic glass adoption, but advances such as the ones SAGE made this year are prompting some architects to reconsider this material, which slowly has developed a following over the past decade, said Randall Vaughn, chairman-president for GNF Architects and Engineers, based in Lexington, Ky. 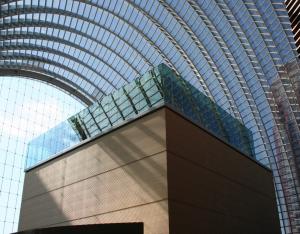 "When you look at the maintenance and long-term usability, and the fact that [the glass] allows you to main aesthetics, it just makes sense to consider it," he said.

While GNF hasn't used Sage's technology often, it installed approximately 4,800 square feet in a curtain-wall façade at a LEED Gold-certified Siemens manufacturing plant in Hutchison, Kan. The western orientation chosen for the building was challenging, but the glass enabled the engineers to reduce the summer cooling load while avoiding the maintenance gripes of mechanized blinds, he said.

John Van Dine, founder and CEO of Sage, which was acquired last year by French buildings giant Saint-Gobain, believes dynamic glass will become far more commonplace in the next three to five years because it is recognized under the U.S. Green Building Council's LEED program.

"Because dynamic glass impacts a number of the LEED points, more points can be gained by dynamic glass than any other building technology," he said. "The limitations historically have been the ability to produce at volume, good lead times and the sizes that you would want."

The worldwide market for electrochromic glass windows, in particular, is expected to almost quadruple to more than $2.1 billion in sales by 2017, according to research firm Nanomarkets. Another forecast from Navigant Research suggests that worldwide demand for smart glass will exceed 3 million square feet annually by 2020.

"High-performance buildings require a level of control over energy that many of today's automation systems are only now starting to address," said Eric Bloom, senior analyst with Navigant. "Smart glass is an innovative technology that both provides building owners unprecedented control over solar heat gain and offers a visually impressive alternative to flat glass."

SAGE's own internal benchmarks suggest SageGlass can reduce a building's cooling load by 20 percent; curb lighting costs by up to 60 percent; and cut heating, ventilation and air-conditioning (HVAC) requirements by up to 30 percent. An example of this concept in action is the student services building at Chabot College in Hayward, Calif. In that installation, the Sage technology is used in concert with other building technologies.

To date, however, many applications using SageGlass have been extremely specific or limited. Take the 6,000-square-foot installation at the Kimmel Center for Performing Arts in Philadelphia.

BLT Architects was challenged to come up with a thermal and acoustic enclosure for the rooftop garden on top of the building. With its breathtaking views of the cityscape, the space (which can accommodate up to 200 people) offered great potential for events. But there was initially no good way to reduce solar heat and glare, or to separate the sounds of parties from the sounds of performances below.

BLT Architects used SageGlass liberally because it kept the space more open and light than the alternative (mechanized blinds). The glass cost only "fractionally" more plus it cut out the need for an extra air handler, said Donna Lisle, senior associate for the architectural firm.

The only drawback was the size of the panels, which forced a redesign of the original concept, an issue that has been addressed by the new manufacturing facility.

Sage's new plant already has shipped glass to a new research facility at the Argonne National Laboratory in Chicago, where it will be used in a 2,000-square-foot south-facing curtain wall. The glass was chosen for two main reasons: to allow the occupants a view of the surrounding forest and to let natural lighting penetrate deeply into the workspaces.

As it ramps up production, Sage is actively working with leading players in the building controls space such as Johnson Controls, Lutron and Siemens to integrate its glass more closely with building occupancy systems, Van Dine said. "Their pathway is integrating dynamic glass into the whole control of the building," he said.

For example, some installations are experimenting with windows that can include up to three different zones on one pane of glass, each of which can be controlled independently. "It could be one piece of glass you are zoning or you could have separate panes of glass where you can control each of those independently, and at different intermediate states," Van Dine said.

Today, the SageGlass is tuned for each building and essentially set when it is installed. In the future, though, the glass could be tuned automatically: "You can change the energy dynamics of the whole façade of the building."

Given the $55 billion company behind it, Sage is considered a leader in the smart glass marketplace. Another major player in the electrochromic segment is View Inc. (formerly known as Soladigm), which also has significantly ramped up its manufacturing capacity. View has publicly raised $125 million in venture capital, although it is engaged in a patent dispute with Sage.

They include RavenBrick, which makes windows that block or absorb heat depending on the settings, and is ramping up production in Denver; and PleoTint, which has announced several distribution agreements this year for its technology, which works with laminated glass.