The US faces a bit of a math problem when it comes to making its buildings more energy efficient. If every energy auditor worked around the clock, it would take 22 years to analyze all buildings.

Of course, the audit is only step one.

“At that point we wouldn’t have saved a single kilowatt-hour of energy,” said Mike Kaplan, vice president of marketing for Retroficiency, a building analytics company and the source of the 22-year statistic.

Is there a way to speed the process – and allow auditors to eat and sleep, too? Retroficiency is a part of a breed of startups that see Big Data and analytics as the solution.

The first trick is figuring out which buildings to tackle. Utilities and energy service companies need guidance identifying the best prospects among the nation’s 5 million buildings. Thirty percent of US buildings account for 70 percent of the potential energy savings, Kaplan said.

To identify the 30 percent, Retroficiency offers a "virtual energy assessment," a platform that quickly scans buildings to “create energy models on the fly,” he said. The software program evaluates thousands of commercial buildings per day, spending minutes on each building. It requires only a building’s interval consumption data and address. The process is entirely remote; no one needs to set foot on the property. 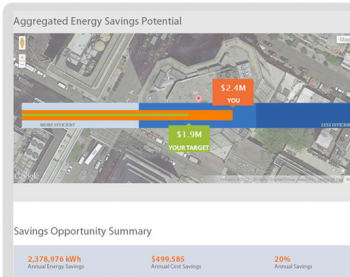 With the best prospects identified, the next step is convincing building owners to undertake a retrofit. Here Retroficiency follows the lead of contemporary product marketers – it personalizes the pitch, much the way OPower does for the homeowner. So rather than getting a generic flyer about utility incentives, the building owner gets a message, something like: "We’ve looked at your building. Here’s what we found. And we know how you can cut your bill by 15 percent – oh, and your utility offers incentives."

When the building owner has signed on, the next step begins, the "automated energy audit." This can be a combination of both remote and on-site work by auditors or engineers. Auditors input into Retroficiency’s software whatever they know about the building – type, size, information about its lighting, heating and cooling – or whatever they uncover in a walk-through of the premises.

“We have data based on tens of thousands of previous audits. We can very quickly generate an hourly energy model of the building, and then run that energy model to evaluate thousands of measures in minutes,” Kaplan said.

The building owner gets a report with recommended energy efficiency improvements. About two-thirds of recommended measures come from the automated process and one-third from the auditor’s customized analysis, he said.

Since Retroficiency launched in March 2011, it has evaluated more than 300 million square feet of building space and identified more than 1.5 billion kWh of savings. Its software is used predominantly in the US and Europe. Some of its clients include the Council of Smaller Enterprises in Ohio, Liberty Property Trust and CLEAResult. Retroficiency also is conducting about a half dozen pilots for utilities.

Retroficiency sees a big market ahead for remote building analytics. The US is tapping only about $20 to $30 billion of what appears to be a $100 to $400 billion market for energy efficiency, according to Kaplan. Greening our buildings is high on the federal agenda. States and cities also are putting in place goals and mandates to improve building efficiency. Several large cities, for example, now require that large buildings publicly report their energy performance.

“One component of the mandate in Boston and in other cities like New York and San Francisco requires some buildings to conduct energy assessments on their buildings. Retroficiency can enable building owners and their service providers to generate more comprehensive audits in 50-80 percent less time that traditional audits. This means that more money can be spent on energy efficiency measures rather than just evaluation,” Kaplan said.

Others are also moving into this space. Energy Efficiency Markets recently reported on FirstFuel, another Boston-area company specializing in remote building analytics. Who else? Please let us know in the comments.