Over 120 million sports fans attended professional football, hockey, soccer and basketball games in the United States last year -- that doesn’t even include the millions of collegiate, high school and youth sports fans around the country. That’s a lot of hot dog wrappers, soda cups, napkins, lights, water to flush toilets and water the fields, fertilizer to keep those fields green and cars to get fans back and forth. What a footprint! America’s favorite pastimes, it seems, have the potential to be anything but green.

In the past few years, though, a lot is going on to change the game. Field managers, team and venue operations managers, owners, leagues and teams themselves along with their many partners are working together not only to improve their image but also to lessen their environmental impact.

Amazing success stories of energy and water savings, increased solid waste diversion rates and improvements in fan travel behavior across the country abound. One of the best places to look for them is where the movement, arguably, got started: Philadelphia, where the most aggressive greening sports activity began at the home of the National Football League’s Eagles, Lincoln Financial Field. It was back in 2003, with the opening of a new training facility and the construction of a new stadium, that the ownership group took a serious look at their environmental stewardship responsibilities. They understood the opportunity to be good environmental stewards in how they operated their facilities and inspired their fans to take personal action.

The impact in that stadium from those fans alone is significant. Each Eagles home football game attracts over 70,000 fans. However, since the inception of their greening efforts, it is estimated that over 3 million pounds of waste have been diverted from landfills, the electricity saved through their Go Green efforts would power 7,150 homes a year and their green purchasing efforts have saved over 6,000 trees. The energy efficiency efforts alone are stunning. One hundred percent of team operations is powered by purchased wind power and augmented by solar power generated onsite. The Eagles also partnered with PPL Renewable Energy to design and construct a 10 kW solar system at their NovaCare Complex, the team’s training and practice complex near Lincoln Financial Field. 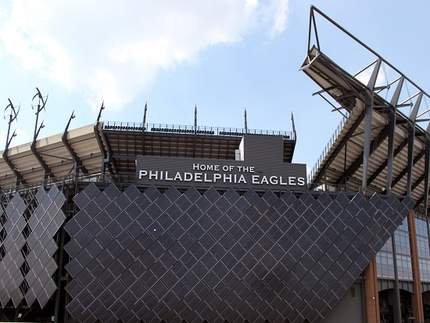 It’s not just the Eagles that are making a difference in the City of Brotherly Love. In 2008, its Major League Baseball (MLB) team, the Phillies, launched the "Red Goes Green" program in an effort to lead the way in the clean energy movement at professional sports venues. In launching the initiative, the Phillies became the first MLB team to join the U.S. Environmental Protection Agency’s (EPA) Green Power Partnership program, a voluntary program that encourages organizations to buy green power as a way to reduce the environmental impacts associated with purchased electricity use. According to the EPA, each year the Phillies use 16.9 million kWh of green power. In addition, for every home run a Phillies batter hits this year, a tree will be planted. So far, they’re up to 82 home runs.

The Wells Fargo Center, home to the National Hockey League’s Flyers and National Basketball Association’s 76ers, continued its own commitment to improving its footprint when its started its “go green” program at the beginning of the pro basketball season last fall. Sports and entertainment firm Comcast-Spectacor worked with Waste Management and Aramark to begin a composting program to divert all food waste that once went from the arena to landfills. They introduced compostable serviceware in the arena as well.

All of these Philadelphia teams and venues are members of the Green Sports Alliance. Now with its members including 70 teams, 99 venues and seven leagues, the Alliance helps provide the technical resources, direct support, focused research and facilitated networking to allow those involved in sports to adopt and expand efforts to operate efficiently and improve their financial bottom lines. The Alliance includes partners such as the Natural Resources Defense Council (one of the founders) and the EPA, and technical assistance from the Pacific Northwest Pollution Prevention Resource Center (PPRC), among others. One of their prime events for sharing best practices is the third annual Green Sports Alliance Summit, which will be Aug. 26-28 this year in New York City.

With the Green Sports Alliance and its partners, these stories are playing out across the country. Environmental stewardship is now as much a part of the game as are wins and loss records, the seventh-inning stretch, "Monday Night Football," March Madness, tailgating, “Ladies and gentlemen, start your engines!” and the all-American hot dog.

Now if only they could discover a compostable hot dog wrapper that would keep your dog warm.