The latest stats are out and the verdict is in: After losing the “honor” to Honolulu in 2011, last year Los Angeles recaptured its long-standing distinction as home to the worst traffic in the United States. By far the most congested stretch of road in America is an 8-mile segment of the 405 freeway. In traffic-plagued cities and corridors such as that, drivers can spend an incredible 62 hours per year sitting idle in their cars in gridlock. That’s a week-and-a-half worth of time that otherwise could be spent at work, with family, whatever. Blech.

The crux of the problem, notes RAND Corporation in its report “Moving Los Angeles,” is “an imbalance between the supply of road capacity and the demand for driving during peak travel hours.” Well, duh.

Listen, I’m no traffic engineer, but I did grow up on Long Island close enough to New York City that I could see the Twin Towers on the western horizon across the Great South Bay. I’ve driven the streets of Manhattan aplenty. And I’ve lived in Weehawken, N.J., directly across the Hudson River from midtown Manhattan near the Jersey entrance to the often-clogged Lincoln Tunnel. In other words, I’m no stranger to big city highway bumper-to-bumper traffic. There’s a reason locals nickname the Long Island Expressway (I-495) “the world’s longest parking lot.”

From where I sit (thankfully, not in traffic anymore, now that I live in Longmont, Colo., and ride the bus), traffic congestion and solutions to that big honking problem are coming at it from the wrong angle. Attempts to alleviate congestion largely seem to assume that you need to travel from point A to point B. Thus you either increase capacity (build more lanes), encourage public transit and ridesharing (move more people per vehicle) or shift the timing and/or size of peak driving demand by disincentivizing trips (congestion pricing). Even multimodal transit-oriented development that encourages light rail, bus and bicycling still assumes you’re going from point A to some distant point B. Most recently, earlier this year Los Angeles made the widely publicized move to synchronize all 4,500 of its traffic lights.

But what if what’s so enticing about point B is actually at point A, so that the trip isn’t necessary in the first place? 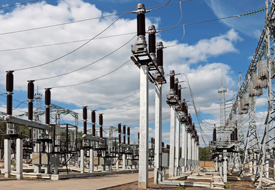 There are lessons to be learned here about our electricity system. Seriously. Our nation’s network of congested cities and highways and our electricity system based upon large central thermal power plants and long-distance transmission lines are really quite similar. Bear with me while I explain.

They are both antiquated and constrained systems of infrastructure. And in both cases, one of the most attractive solutions starts by asking a basic question: Do we really need congested pathways -- whether highways or transmission lines -- as much as we do? What if decentralization -- through distributed generation of electricity and intelligently designed smart growth -- reduced congestion by addressing its root cause?

There are at least five ways our electricity system can learn from Los Angeles’ traffic and urban planning:

1. Site generation and demand closer together. Instead of trying to figure out increasingly difficult ways to get people (or electrons) from point A to point B, locate both generation and demand at or near point A. People spend much of their driving time going from home to work, and sometimes to the supermarket and retail stores. But if all of those needs are in the same vicinity, they never need to get on the congested highway or other major artery in the first place. That’s a core principle behind smart growth and projects such as Millennium Hollywood, which includes “concentration of new residential development in pedestrian-friendly neighborhoods, reducing the need for short, street-clogging drives for basic errands such as buying groceries.” Similarly, distributed electricity generation sited closer to load centers can help to offset the need for transmission and distribution capacity upgrades and other major infrastructure investments.

2. Embrace diversity. Mind you, I’m not advocating for decentralized cities in which the pendulum swings too far the other way toward auto-dependent sprawl of “monoculture” residential suburbia and bedroom communities that still require excessive driving to the grocery store, work, etc. Nor is this about density alone, which in and of itself doesn’t solve the problem. This is about clustering compact diversity -- home, work, play, shopping -- to meet needs. For example, a 2012 Arizona Department of Transportation study found a 25 percent or greater reduction in driving miles for residents of denser, diverse communities versus suburban neighborhoods. A Victoria Transport Policy Institute report also from last year likewise found 20 percent to 40 percent reductions in auto travel among residents of smart growth developments. Utilities also can embrace diversity. Rather than go “all in” on solar or efficiency, wise investments in a variety of generation sources -- including solar PV, efficiency, demand response, some wind and cogeneration -- can provide a robust suite of sources to meet demand.

3. Avoid system waste. Hand in hand with siting diverse generation and demand closer together comes the opportunity to avoid system waste. For example, the cost of Los Angeles’ traffic congestion -- as measured by fuel waste and lost time -- totals nearly $10 billion annually. The numbers from the Texas A&M Transportation Institute’s 2012 Urban Mobility Report, which examined 498 urban areas in the United States, are even more staggering. Traffic congestion cost Americans 5.5 billion hours of extra time, 2.9 billion gallons of wasted fuel, $121 billion in delay and wasted fuel costs and 56 billion additional pounds of CO2 emissions. Imagine all that we’d gain by avoiding such profound and unnecessary waste. So it is, too, in our electricity system, where transmission and distribution line losses siphon off 7 percent of our electricity, according to the U.S. EIA. In California alone in 2008, those line losses added up to about $2.4 billion in electricity. Distributed energy resources, meanwhile, avoid the lion’s share of those losses by skipping the transmission system -- and frequently, the distribution system -- through siting close to load centers.

4. Rethink funding the system. Whether state and federal gas taxes that fund much of our highway infrastructure, or a bundled electricity rate that covers generation, transmission, distribution and more, it’s time to rethink how we fund these major systems. Both more or less offer a one-price volumetric model: The more gas or electricity you buy (in theory directly proportional to the quantity of your energy consumption and use of the system), the more you pay. To their credit, such funding models have worked up until now. But they assume that people will continue to use electricity or gasoline as they always have, which is no longer true. As increasing efficiency, alternative fuels and innovative technologies shift our consumption patterns -- hybrids, EVs, etc. for roads; efficiency, rooftop solar PV, etc. for electricity -- old funding models rapidly are becoming outdated.

5. Leverage resiliency. Resiliency describes the ability of a system to withstand or adjust to large disturbances, ideally without any major failures. By that measure, the highways of Los Angeles and pretty much any major city I can think of don’t measure up. Just think of the crippling effect a vehicle accident can have on traffic flow. A big pileup that shuts down an entire highway can plunge a region into a congested nightmare. Smaller accidents that block one or two lanes can snarl traffic for hours. Heck, an accident doesn’t even have to block a single lane. Just the simple impact of rubbernecking is enough to significantly slow down traffic on our already congested roadways. I remember a time when such creeping traffic threatened to cause me to miss a flight at New York’s La Guardia Airport. Had a family member -- a former New York City taxi driver -- not known the best surface streets to take to avoid the stand-still parkways and get me to the airport, my plane would have left without me. Our current electricity system and its dependence on major arteries of long-distance transmission lines and other aspects of the system’s infrastructure are similarly vulnerable, and that vulnerability comes with a cost. According to a Washington Post article earlier this year, electricity blackouts cost the U.S. economy some $150 billion per year, and the electricity system is less reliable than it was 10 years ago, even as costs have climbed. Distributed energy resources, meanwhile, are like the surface streets that got me to the airport when the major highways would have failed me -- they’re an integral part of an inherently more resilient system.

Resolving L.A.’s -- and our nation’s -- sizeable traffic problem on our highways and in our cities won’t be easy, and it won’t happen overnight. Major change that moves beyond Band-Aids such as congestion pricing and encouraging public transit toward deeper structural change in urban development patterns will require time, investment and cooperation among myriad stakeholders. If we’re to solve such problems, however, we must be willing to take bold steps in that direction, recapturing our time, our money, our environment and more in the process.

Although harder for everyday consumers to see, the challenge -- and opportunity -- before utilities and the United States’ electricity infrastructure is just as great.

This article was originally posted on the Rocky Mountain Institute's blog, RMI Outlet.