Last month at the U.S. Marine Corps' Mojave Desert combat training center, some of the military's best and brightest gathered to test the latest in energy-saving gear. The gadgets sound like ones that a green scientist might dream up if set loose in Q's lab -- collapsible solar arrays, electricity-generating backpacks, hybrid power systems using solar panels and personal cooling vests. But as I saw on a visit to the center, these devices are very real -- some already have been deployed on the battlefield in Afghanistan -- and demonstrate the Marine Corps' determination to save fuel in the field.

Since 2001, the average Marine Corps infantry battalion has a 300 percent increase in computers and IT equipment and a 200 percent increase in vehicles. This proliferation of energy-guzzling gear comes at a steep cost: marines wounded or killed in fuel and water convoys, as well as a surging fuel bill for taxpayers.

According to a Marine Corps study conducted two years ago, one Marine was killed or wounded for every 50 fuel and water truck convoys in Afghanistan, and 1 in 17 of the convoys was disrupted by an improvised explosive device. Seventy percent of the logistics required to sustain Marine Corps expeditionary forces onshore is for fuel and water. An infantry company (125-150 Marines) today uses more fuel than an infantry battalion (900-1,000 Marines) did in 2001. In Afghanistan, the corps has spent $794 million in one year for the fuel used by Marines deployed at some 300 sites. According to Major Brandon Newell, technology lead for the Marines' Expeditionary Energy Office, approximately 60 percent of that fuel is burned to provide climate control for Marines and their equipment.

But now the Marines and the other U.S. Armed Forces have launched aggressive initiatives to reduce their dependence on fossil fuels -- on the battlefield as well as at far-flung installations in the U.S. and across the globe.

If you listen to Marine Corps brass talk about energy, it's clear that the corps' growing fuel burden is recognized not just as a budget-buster in a time of austerity but as a threat to the very idea of what it means to be a Marine. The corps' charge is to be ready to jump from ship to shore and operate in hostile and austere environments for up to 120 days with limited resupply. The missions call for agility, speed and self-sufficiency -- attributes at odds with a fuel umbilical cord.

The occasion for my visit to the Marine Corps Air Ground Combat Center, just outside Twentynine Palms, Calif., was the corps' sixth ExFOB (Experimental Forward Operating Base) demonstration. Founded in 2009, ExFOB brings together personnel from the Marine Corps, the Office of Naval Research and the other armed forces to identify and evaluate promising energy-saving solutions. Private companies are invited to demonstrate commercial technologies that can be quickly deployed to the battlefield.

The focus of last month's ExFOB demonstration was hybrid power generation systems, which combine solar energy with traditional generators powered by jet fuel. Newell said the corps is keen to do away with the status quo -- stand-alone generators. He said at a presentation last year that the median demand in the field is 32 percent of the generator capacity, leading to a significant waste of fuel.

"Eighty or ninety percent of the time I'm going to be inefficient because the system is designed to meet the peak load," Newell explained. "Hybridizing solves that for us."

The 13 hybrid systems exhibited by 10 companies at ExFOB last month packaged solar photovoltaic panels, battery storage and smart controls with generators. Electricity from the solar panels can be used in real time or stored for use later, reducing the generator's running time. Newell said the hybrid system also keeps the generators from running at low loads, which wears them out more quickly.

"These two systems are now available to all Marines in the Marine Corps," Colonel Bob Charette, director of the Marines' Expeditionary Energy Office, said at an ExFOB briefing. "For Washington, D.C. -- typically known for going kind of slow -- in three years we not only have stuff in Marines' hands, we're also looking at the next generation." 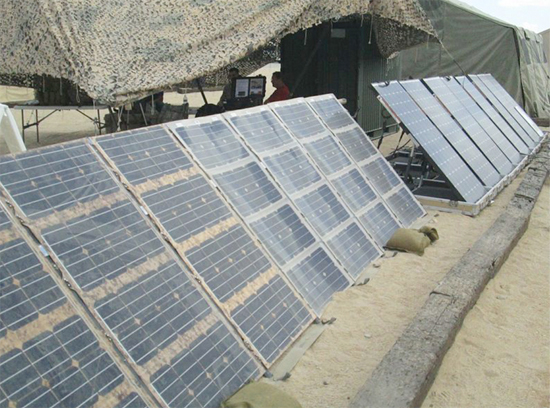 Much of the corps' next-generation technology will be incorporated into the updated portable solar GREENS system. The first-generation system proved its worth in the field, said Newell, but it was weighed down by heavy glass solar modules. The goal for the second iteration is a 50 percent reduction in weight, 10 percent reduction in size and 10 percent more energy harvested. The GREENS 2.0 prototype, outfitted with glass-free solar panels from SBM Solar and frames made by Composite Technology Development (CTD), already weighs 45 percent less than its predecessor, according to Newell. I watched as CTD's Robert Taylor broke down the unit. He rolled the pliable plastic frame legs into a tight bundle, which he placed, along with the folding solar panels, into a long, thin box.

Next year, Newell said, the Marine Corps will begin fielding smaller, lighter and more efficient 5- to 60-kilowatt Cummins generators. Soon thereafter, the corps plans to deploy energy-dense lithium-ion batteries developed by the Office of Naval Research that should charge in 15 minutes, compared to two hours for existing models. Newell said the corps is also looking to add flywheels and supercapacitors to its energy storage mix.

Also on display at ExFOB were wearable solutions that serve a dual purpose: They save fuel and reduce the crushing load Marines carry on their backs.

"A combat-loaded Marine is carrying an extra 120 pounds on his body," Captain Nick Mannweiler, public affairs director at the Marines' Air Ground Combat Center, told me, noting that the load typically includes up to 35 pounds of batteries. "Anything you can do to lighten that load means he's going to be faster on his feet, he can go longer periods of time."

One solution is what the corps calls the Marine Austere Patrolling System (MAPS), a backpack and harness that integrates a solar panel, water purifier, radios, batteries and smart controls. Newell described the specs: a flexible, 30 percent efficient PV panel; an in-line water filter linked to a CamelBak container that lasts up to 14 days; form-fitting batteries that replace the bulky multipurpose "brick" batteries currently in use; and a digital display that gives Marines real-time energy data. MAPS will be tested in the field at the Marine Corps Mountain Warfare Training Center in California this fall. 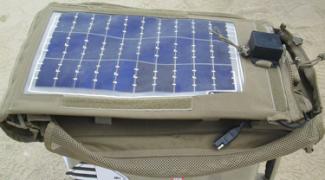 MAPS could be used in tandem with military versions of backpacks being developed by a company called Lightning Packs. The electricity-generating and ergonomic suspension-load backpacks decouple the load in the pack from the body with a frame design that frees the load to ride on a rail as the wearer moves. The result: the wearer exerts less energy to move the load, and the load exerts less force on the wearer. In the electricity-generating model, a Marine would produce up to 35 watts while walking, or at least 40 watts while running, which can be used to power radios in real time or stored in a battery. A Marine could generate 30 to 50 watts at rest by manually pumping the pack.

The other wearable solution at ExFOB was a response to the exorbitant cost to the corps of cooling tents in Afghanistan. As we approached a canvas tent, Newell pointed to black boxes -- compressors -- placed at each corner. We entered, and Newell explained that the corps was borrowing a technology developed by the Army for use by helicopter pilots and tank crews: individual climate control.

If the corps had used an environmental control unit to cool the tent, Newell said, it would consume 4.5 kilowatts. Instead, the five compressors that sent cold water to 10 vests set up at tables inside the tent consumed just 1.2 kilowatts. Outside the tent, it was 85 degrees; inside, it felt even warmer. I sat down at one of the tables and strapped on a vest, which contained tubes that cycle chilled water. Newell turned on the flow of water. Within moments, a soothing chill cooled my chest and back.

In addition to the Marine Corps, other branches of the U.S. Armed Forces are also making major commitments to cut energy use and reduce fossil fuel dependence. Seventeen Army installations are participating in pilot programs of a "Net Zero" initiative, under which each installation is to produce as much energy as it consumes. In the Navy, Secretary Ray Mabus has championed a plan under which half of the Navy's onshore energy will come from renewable sources by 2020 and half of the liquid fuel for its fleet will come from alternative sources by the same year. The latter target has been met with resistance in the U.S. Senate, where opponents have tried twice to block the Navy's efforts to scale up a biofuels program, arguing that it is too costly.

The National Defense Authorization Act of 2007 requires that 25 percent of the energy consumed by the Defense Department in 2025 come from renewable sources. In 2011, the Marine Corps commandant signed an energy strategy that seeks to go even further, stating that by 2025 Marines will be 50 percent more fuel efficient on the battlefield.

Before I toured the ExFOB site, I asked Brigadier General Mark Wise, commanding general of the Marine Corps Warfighting Laboratory and chairman of ExFOB, whether congressional budget cuts under sequestration, which would slash some defense discretionary spending by 9 percent, will force cuts in the corps' energy programs.

"Sequestration certainly has the potential to slow things down," he said. "But when you start talking with Congress, to the leadership, you'd be surprised at how very focused they are in investing in future capability.

"They realize that when you start talking about hybrid energy, you start to talk not only about decreasing the amount of liquid fuel you have to have on the battle space, but now you're talking about generators that require less maintenance, last longer. You start to talk about the business case. That resonates with folks. In a time of sequestration, smart business is a good way to go."

3 Reasons Why the Military Is Leading the Clean-Energy Charge