As the owner of the second LEED Platinum-certified home in Dallas, I first knew the U.S. Green Building Council’s framework for sustainable building as a consumer. When the LEED for Homes ratings launched in 2007, my builder gave me a crash course in the Home Energy Rating System (HERS) and rug pads. The volatile organic compounds (VOCs) emitted by carpet pads, as well as the invisible filth they absorb, can be hazardous to health. Learning this as a new mom, the health case soon became a primary focus even though conserving energy was my original motive.

Although we like to think of our homes and offices as bastions of safety, indoor environments are often 2 to 5 times more polluted than outdoor air, by EPA estimates. Carpet pads aren't the only toxic elements the traditional building industry has swept under the rug. A large number of manufacturers and trade organizations are unwilling to disclose information about product safety in flooring, wall coverings and other construction materials. This practice of “controlled transparency” shields the consumer from details about ecotoxicity, the harmful effects of a substance on ecosystems, as well as about human toxicity.

Scientists have traced the increase in a range of maladies to the escalating concentrations of polluting chemicals we touch, ingest and breathe. Formaldehyde and other fumes released inside buildings contribute significantly to this internal buildup of chemicals, called the body burden. Shockingly, no regulations protect the public from these ubiquitous chemicals.

“The system is such a failure that it has actually produced a bipartisan consensus that something has to change,” said Bill Walsh, executive director of Healthy Building Network, at the North Texas Sustainable Showcase earlier in July.

And most of the conditions on the rise that are associated with chemicals of concern affect children in the first years of life. A 2012 report by the World Health Organization and the United Nations found that the asthma rate doubled in 20 years to 9.4 percent in 2010 among U.S. children up to 17 years old; along with a marked increase in autism, preterm births, low birth weight and pediatric brain cancer.

There should be laws to protect people, but the chemical industry remains virtually unregulated. Among some 80,000 chemicals are used in industrial society, 85 percent have no human health data available. No chemicals have been banned, not even asbestos. 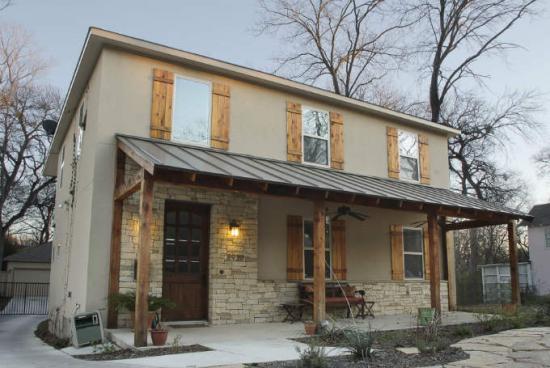 To fill the gap, the Healthy Building Network and content website BuildingGreen.com brought together industry pioneers in 2011 to create a standard for reporting the content and associated health information of building products. The idea was to help sustainability leaders make informed decisions about the products they purchase and their impacts on human health, and to reduce the burden on product manufacturers juggling multiple types of information and reporting formats. The outcome of that meeting was a working draft of the Health Product Declaration (HPD) Open Standard, a new industry format for conveying details about product content and associated health information.

The Health Product Declaration is designed to:

• Save time and money for customers by making research efforts more productive.

Twenty-three leading design, construction and building management firms endorsed the first draft of the HPD. A small group of manufacturers volunteered in a pilot to test the draft format. They were later joined by 29 manufacturers in the pilot program in the summer 2012. Thirty leading product manufacturers submitted 40 draft HPDs for review, and 50 independent experts from the building industry provided additional feedback. The first official version of the HPD Open Standard was released at Greenbuild 2012 as a customer-led, membership organization.

Among the pilot manufacturers are innovators such as Forbo Floring Systems, a global company including its declaration in marketing collateral such as the 2013 health issue of its publication “Sustain.”

More companies are beginning to recognize the potential to use the HPD as a competitive advantage. As Walsh of the Healthy Building Network said, “Knowing about the healthiness of your products is a real differentiator.”

Transparency, of course, is a step in the right direction, but will only take us so far. Changing systems is the real challenge. Several pioneers involved in launching the Health Product Declaration are creating tools and practices to address behavioral problems. For example, to bridge the gaps in the supply chain and overcome the costs of changing processes, Walsh has introduced the Pharos Project, a tool for locating the best building materials.

“Pharos is a tool to help cut through the prolific greenwashing,” Walsh said. “It’s a space where users can discuss what makes a product truly green. And most importantly, it’s a platform from which to show manufacturers what constitutes a market in support of the best environmental, health and social equity practices.”

Seeing the health considerations that my builder and I discussed in 2007 show up in new standards now is a welcome reminder that systemic change doesn’t happen by accident, but through the many independent actions we make as consumers every day.

A closer look behind the walls of product transparency