The drive toward ultralight cars speeds ahead

The drive toward ultralight cars speeds ahead

Editor's Note: This story is republished with permission from the Txchnologist, a digital magazine that follows innovation in science and technology.

BMW is making a big bet in fielding its new i3 electric city car, and that means taking efficiency to the max. The company came up with an ultra-lightweight platform for the i3 -- called LifeDrive -- that combines a passenger cell made of carbon-fiber-reinforced plastic with an aluminum Drive module that holds the battery, powertrain and structural crash protection. Even the instrument panel supports are made of magnesium, another very light material.

"Every step in the development of the i3 has been shaped by the demands of weight optimization," BMW says.

Unfortunately, joining all these parts isn’t easily done. Steel and aluminum, for instance, are what the British call "chalk and cheese," meaning they’re about as compatible as a rock and a dairy product. And that’s a problem when you want to attach a lightweight aluminum roof panel to a steel body.

A bridge between chalk and cheese

Honda, for one, has been working on the metal joining problem for some time. Gizmag reported in 2012, “Although some engineers have had success in spot welding steel and aluminum together, it has largely been considered impossible to achieve reliable, continuous welds directly between the two dissimilar metals.” 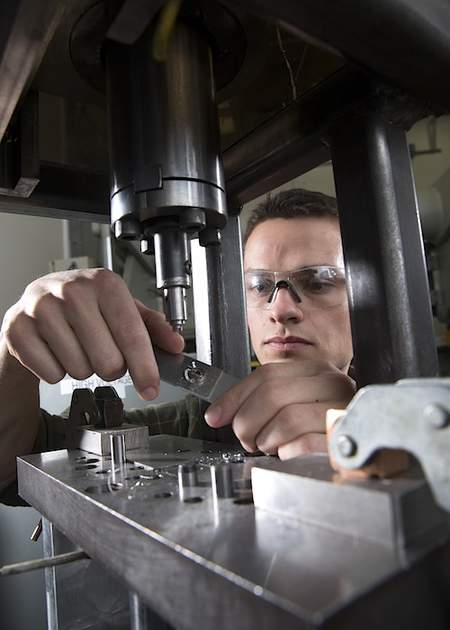 The company found one answer in a version of friction stir welding, which joins steel and aluminum through mechanical pressure using a rotating tool. Announced in 2012, it already was in use for the 2013 Accord.

Zhili Feng is group leader in the materials joining group at Oak Ridge, which has been working with Honda. He says that there’s “a lot of push” from auto companies to figure out how to get metals to work together. He explains that temperature is the key.

“Welding steel to steel is not a problem because the two pieces being joined have the same melting temperature,” he says. “But carbon steel liquefies at a much higher temperature [2,600-2,800 degrees Fahrenheit] than aluminum [1,220 degrees F], so the two don’t connect well. The quality of the weld is not good -- cracking is a big problem, for instance. That’s why we needed a way of putting them together without melting.”

Stir welding is a very useful process, Feng says, and in fact he owns one of those 2013 Accords that uses the process. It’s great for making long welds of straight sections, he says, but not as useful for putting together pieces of metal with the compound curves typical in cars today.

Michael Miles, a professor of manufacturing engineering technology at Brigham Young, says that steel and aluminum are resistant to spot welding. This is in part because very brittle inter-metallic compounds are formed when aluminum is joined not only to steel, but also to other lightweight metals such as magnesium or titanium.

Techniques such as self-piercing riveting have been used by the auto industry, Miles says, but these don’t work with the ultra-high-strength steel that’s a vital part of losing weight in modern cars. “Automakers are struggling with the durability of joints,” he says. “You can’t form the material around the rivets. Everybody’s working on it.”

But Miles asserts that friction bit joining is a bit of modern alchemy. “We’ve done a lot of lab testing, and the strength of the connection is very high,” he says.

Friction bit welding works by inserting a thin layer of steel between the two metals being joined. As described in a BYU paper, “A consumable bit cuts through the upper layer of metal to be joined, then friction welds to the lower layer. The bit then snaps off, leaving a flange.” In some tests joining steel to magnesium, “the weld is stronger than the magnesium alloy,” the paper states.

According to Miles, BYU also has worked successfully with a Hyundai supplier in South Korea to join an aluminum hub to a cast-iron brake rotor. Asked for another possible use, he points to a steel door with an aluminum inside panel. “Friction bit joining is good for bonding anything very hard [like that steel] to something very soft [like aluminum],” he says.

Feng says there are other benefits to the new technique. “It’s not just about joining the two metals together, it’s about doing it faster and cheaper,” he says.

Ferrari’s 458 Italia is joined together with a combination of welding, riveting, sheet metal screws and even epoxy. Yes, parts of this sexy Italian are glued together. But it probably won’t be long before news of BYU’s friction bit process reaches the sacred precincts of Maranello. Glue is already on its way out there. And Ferrari engineer Patrizio Moruzzi told Popular Mechanics, “In the future there will be more bonding than welding."

BMW i3 image via BMW USA

Less can be more, but endless is most