This article originally appeared at Next City.

Method, the eco-friendly cleaning supply company, is opening its first U.S. manufacturing plant, and residents of Chicago's South Side can look out for the 150,000-square-foot, LEEDs-certified soap production facility next year.

The San Francisco-based company, which Belgian company Ecover acquired last year, will set up shop on the site of the old Ryerson steel mill as part of the Pullman Park redevelopment project. Pullman is a 174-acre mixed-use development that will need a zoning change for Method, as it initially had not planned for a factory as part of the project. The developer, Chicago Neighborhood Initiatives, is expected to apply for about $10 million in TIF subsidies, according to the Chicago Tribune.

Ecover will receive $1.1 million in tax credits over the next decade for creating roughly 100 jobs. Overall, the city and state are shelling out roughly one-third of the $30 million for the project, CBS Chicago reported.

Method is jumping into the market at a time when American consumers are more eager for American-made products. Just like the organic food movement before it, many shoppers have begun looking for the stars and stripes on labels when they buy anything from bikes to T-shirts. 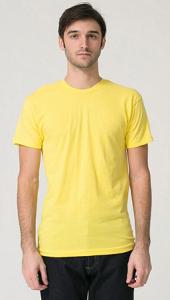 American Apparel was one of the first companies to market upscale products -- this plain T-shirt costs $22 -- as "Made in USA." The company moved into its current seven-story, downtown Los Angeles factory in 2000. Now there are around 4,500 people who do everything from sew shirts to box them up and ship them out.

And while American Apparel is transparent about that fact that its finances eventually could lead the company to produce some products abroad -- "To say that I'm never going to import from overseas would be unreasonable," CEO Dov Charney told the Los Angeles Times last year -- the company is fully committed, for now, to manufacturing clothes stateside. All of its employees are guaranteed a minimum wage of $8 an hour, although factory workers make about $11 an hour on average. That's a respectable living for skilled workers who, according to the company's website, can receive comprehensive healthcare.

The market is starting to realize that Americans want products manufactured on their own soil. From a January Forefront story on the rise of insourcing:

Over a period ending in August 2012, more than 530,000 manufacturing jobs were created -- the greatest growth for any 30-month period since 1989. A motley crew of companies is responsible for the jump, including both experimental startups and the same industry titans that created factory towns during manufacturing's 20th-century heyday. Their reasons for insourcing vary, but one theme is constant: It saves money. This is not a movement singularly based on ideology or patriotism, but on economic reality.

"Labor costs in Asia are ticking upward at a time that, for better or worse, American wages stay the same," said Mark Muro, a senior fellow at the Brookings Institution. "And automation matters more and more, which reduces costs."

If all the trend lines are being read correctly, it seems as if Method's move could provide a replicable model for other manufacturers looking to grow in the U.S.

This article originally appeared at Next City.