A group of leading seafood suppliers have formed the Sea Pact coalition to advance sustainable fisheries and aquaculture practices around the world.

They've agreed to contribute financially to improve the fishing and fish farming systems from which they buy their fish. By pooling resources they can sponsor projects that would be too large and complex for any company to do on their own.

"Santa Monica Seafood realized that to support improvement of fishing and aquaculture practices around the world, we couldn't do it alone and we would need support from other like-minded companies in the seafood industry to help create the scale necessary for meaningful improvements to be realized," says Logan Kock, Vice President of Strategic Purchasing & Responsible Sourcing at Santa Monica Seafood. 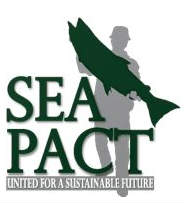 Although there's good news on some local levels, such as dams removed in Maine and marine reserves in California, which created a network of marine reserves, generally government continues to fall short on actions to protect fisheries.

"This decision will not benefit the public, the economic prospects of the fishing sector or the recovery of our seas," says Saskia Richartz, Fisheries Policy Director for Greenpeace E.U. "When fishing grounds are depleted, fishermen use subsidies to cover their losses. But using taxpayers' money for bigger nets or more powerful vessels will continue to fuel overfishing and leave fishermen trapped in a vicious circle." 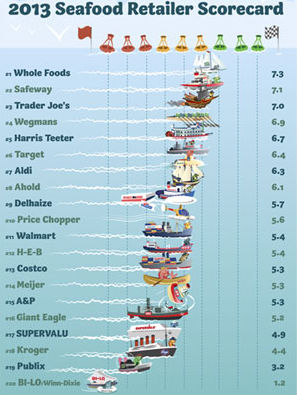 "This deal will set the recovery of stocks back decades, especially in areas like the Mediterranean where the bulk of funds on fleet renewal will be spent," says Tony Long of WWF. "Members of the Fisheries Committee were asked to come up with a plan that could promote sustainable fisheries over the long-term. Instead we have a situation where over 20,000 vessels will be eligible for funding to upgrade that could eventually destroy remaining fish stocks."

Large retailers that have committed to selling only Marine Stewardship Council-certified seafood -- which guarantees tracking of seafood through the value chain -- in addition to being caught sustainably from abundant sources are: Kroger and Target by 2015; Safeway; Sysco, the largest foodservice distributor in the U.S., by 2015; McDonald's in Europe.

Cornell also has made serving sustainably sourced fish a policy, as has Virgin Airlines.

Greenpeace ranks the nation's supermarkets each year on seafood sustainability (scorecard at left).

Seafood Source tracks these trends and offers a supplier directory, as does FishChoice.

Image of tuna by Ugo Montaldo via Shutterstock