One of the most commonly used models for business strategy is called Porter’s Five Forces. This model outlines the forces that shape industry competition: the rivalry among existing competitors, the dual threats of new entrants and substitute products or services and the bargaining power of both suppliers and buyers.

The Five Forces premise is strategy analysis for a company to gain advantage through power dynamics, assume more leverage over other players and use weaknesses against them. A disconnect among this model and CSR and ethics is not often discussed.

The ethical question is whether there are boundaries to how much power can be ethically exerted by powerful multinationals when negotiating contracts with smaller developing manufacturers. What are the boundaries of responsibility? In today’s social media era, are the consequences of overstepping power more severe?

The most dominant of Porter’s forces may be buyer power. A perfect example would be Walmart, with its strategy and success dependent upon its behemoth purchasing power. By building its brand reputation around the delivery of low prices, Walmart drives prices down throughout its supply chain by flexing this power.

But power and responsibility go hand in hand. Companies are coming to terms with the fact that those in the millennial generation, who are becoming professionals in the social media era, have different expectations of corporate responsibility boundaries than the baby boomers who, for the most part, still lead the world’s top companies.

It used to be that a company’s responsibility could rise and set with delivering shareholder value. Now every company must view its reputation like the British Empire; the sun never sets, it just changes location. Even though Walmart also is known for dictating a large number of environmental requirements throughout its supply chain, it found itself among a group of notable companies  blindsided by the 2012 Tazreen factory fire in Bangladesh because its management was not even aware its products were being manufactured there. 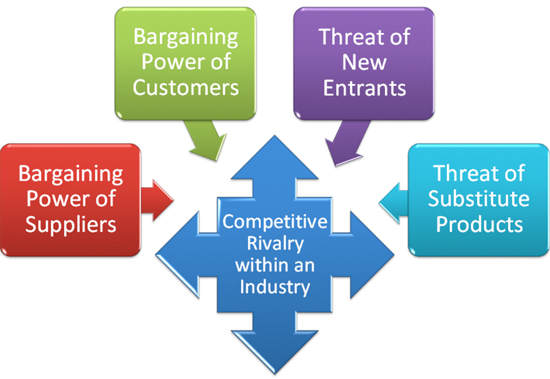 Porter’s Five Forces is founded on the idea that companies need to build defenses for advantage, going to great lengths to retain the negotiating leverage which these defenses establish. Yet in today’s era of fast-paced social media, how can companies build reputational defenses against such a diverse and segmented power as the social media-savvy public?

The social era has created a new, sixth force that companies need to manage for opportunities and threats: stakeholder power.

Stakeholder opinion can determine a company’s profitability because demand drives price and reputational disasters deflate stock values. Companies must expand their audience beyond shareholders to all stakeholders because any stakeholder with a mobile device and a reasonably sized social network nowadays can build or destroy company value through reputational accolades or attacks. Stakeholder power always has been a factor, but today social media amplifies and accelerates it. This moves industry negotiations that formerly took place behind closed doors onto the front page of Facebook.

The trouble with stakeholder power is that it is reactive, reflective, diverse and fractured. Perhaps it requires new thinking. Being big has its strategic advantages, from economies of scale to supply chain reach to access to cheaper global markets, but in the social era it also puts a target on your back.

When a company has a postitive reputation, it likely is better known, sells more and enjoys greater profits. But when a crisis strikes, the black mark scales with your brand notoriety, as does public outcry. This brings risk and volatility that is difficult to control completely, but also suggests that companies require different defense strategies than the traditional moat building highlighted by Porter’s Five Forces.

The growth and evolution of business in the social media era holds great potential for CSR and sustainability. By seeking positive change, companies can pursue and measure value by mitigating risks and avoiding catastrophes such as the one at Tazreen and Rana Plaza. Owning up to the reach of its responsibility protects a company’s shareholders and the company itself.

New analytical tools must be developed, or old standard business tools modified, to reflect new approaches. In 2012 the World Resources Institute (WRI) pioneered development and release of one such tool, focused on sustainability but with ranging potential applications: sSWOT. It is a new take on an approach familiar to the business school canon, the SWOT analysis, which stands for strengths, weaknesses, opportunities and threats.

WRI revised and road-tested a sustainability focused version of the tool that, in its words, “is designed to help drive action and collaboration on environmental challenges, creating real business risks and opportunities.” Several companies tested and gave feedback to WRI on the tool before WRI released the guidelines and tool publicly for any company to use. Businesses, especially big ones, would be wise to explore sSWOT’s potential.

"… the most noteworthy accomplishment is being able to show that a big business, and particularly one that has a reputation for watching its pennies, can take on these large social issues in a big way and make a big difference but also build a stronger business at the same time."

Walmart’s buyer power is leveraged to bring down the cost of sustainable and organic products for its customers, and there could be real beneficial impacts to customers and the environment as Walmart succeeds. It is motivated both by the principles of sustainability and by market segments to which this strategy grants them access. Nothing is wrong with that.

Certainly this also helps build a reputational protection against the labor issues Walmart continues to cycle through. Walmart arguably is demonstrating a way to connect sustainability strategy to the principles behind Porter's Five Forces. How much cost-cutting pressure is appropriate for Walmart to exert on its suppliers, and how much pressure pushes suppliers to make dangerous trade-offs to stay competitive, such as not investing in safety improvements in its factories in order to retain profit margins?

If retailers have the buyer power, there may be cases where the suppliers cannot afford to make capital investments to make the industry safer without losing business to the next cheapest competitor. Manufacturing and the garment industry in particular have long histories that point to the fact we can push competition for the pursuit of profits too far, creating supply chain ecosystems in which sweatshops flourish.

Meanwhile, the big brands that send mixed signals about price, labor and safety practices risk damaging their international brand value (think back to the Kathie Lee Gifford debacle). But those same retailers are not willing to support action or investments that would lead to fixing the safety issues, allegedly because the costs are too high. So who can afford to?

You would think the ones with all the negotiating power would be in the best position. They have the power to choose who, where and how their goods are manufactured.