However, a technology approach from AC pioneer United Technologies Corp.'s Carrier division -- one that dates back to the industry's early days -- also could be part of the solution.

But what's the problem with AC?

For one thing, it sucks up a lot of power. Data centers use about 2 percent of all U.S. electricity annually. America's love affair with AC is even more of an energy hog, accounting for a whopping 5 percent of consumption, at an annual cost of $11 billion, according to statistics from the U.S. Environmental Protection Agency. And that's just what is used in homes, not what's pumped through businesses, office buildings, grocery stores or shopping malls.

What's more, all that coolness emits a staggering 100 million tons of carbon dioxide (CO2) per year, or an average of two tons per year per home.

So, while the phase-out of chlorofluorocarbons (CFCs) was hugely important in addressing humanity's ozone depletion problem, figuring out ways to reduce AC's impact on both energy and the environment is still imperative.

Most AC systems today use halogenated chlorofluorocarbons (HCFCs), but those substances are gradually being phased out with all U.S. production and imports scheduled to stop by 2030.

"We solved for refrigerants that may have addressed the ozone problem but now are causing issues with global warming," said John Mandyck, chief sustainability officer at Carrier.

Carrier's founder, Willis Carrier, is credited with inventing modern AC in 1902. Early on, it became popular as a way of encouraging people to attend movie theaters. It also revolutionized the comfort of working environments, Mandyck said.

So how can technology companies help address this issue?

One alternative refrigerant Carrier touts is actually one of the biggest culprits in global warming: CO2. The company's NaturaLINE (PDF) technology pulls CO2 out of the air and compresses into a liquid, using relatively little energy. 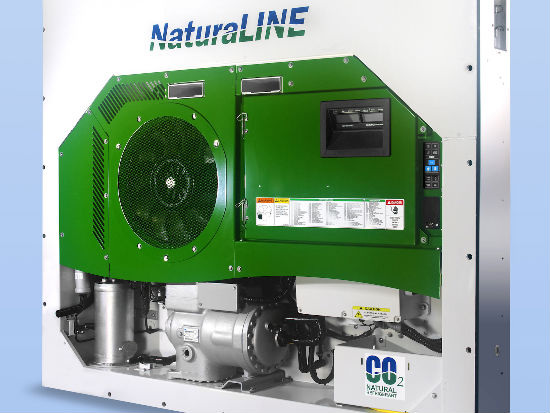 The company believes it is well-suited for low-temperature applications such as storing frozen and refrigerated food, and maybe even for large building chillers (think data centers). As just one example, Carrier figures that the system reduces the carbon footprint associated with seafaring containers by 35 percent, compared with conventional refrigerants.

"Addressing the special thermodynamic properties of CO2 necessitated the development of an innovative refrigerant management system, including a new purpose-built, multi-stage compressor with variable-speed drive, a 'gas cooler' with a wrap-around design and a flash tank," said Mike Griffin, new product development program manager with Carrier Transicold, when the technology was first announced about two years ago. "The patented reciprocating multi-stage compressor maximizes capacity and minimizes power consumption."

UTC also uses CO2 in its CoolTech system for supermarkets, which is installed in more than 500 stores across Europe, according to a company spokesperson. The marine container application is the newest iteration, just hitting the market this fall.

CO2 actually has a long history as a refrigerant; the first CO2 compressor patents were mentioned in patent applications as early as 1850. But they faded from usage in the 1930s, often replaced by CFC-based alternatives.

Carrier acknowledges that CO2-based systems probably aren't an efficient approach (yet) for home AC, but the future always could change that.

Phasing out refrigerants doesn’t have to mean using more energy