How Jim Kor is revolutionizing car design with 3D printing

How Jim Kor is revolutionizing car design with 3D printing

As a mechanical engineer, Jim Kor wants to build the world's greenest car. As a teenager 40 years ago, he bought his first car, an Austin, a year before he legally could drive it on the road.

Although he started his career designing tractors and inner city buses suited to his base in Winnipeg, Manitoba, Kor called upon his teenage love affair with sports cars when conceiving the Urbee -- short for urban electric -- back in 1996. His goal today is to create an electric vehicle for navigating around cities.

Kor, a pioneer of 3D printing for automotive design, has owned at least two dozen other cars -- American classics, iconic English and Italian sports cars, as well as sturdy designs from Germany and even France.

Most city trips, however, are short, at lower speeds. In that sort of environment, do you really need an 180-horsepower engine?

"If buses could accelerate like crazy and had 10 times the horsepower they do now, I think most people would argue, 'Well that's ridiculous!'" Kor said. "In a personal vehicle, there's a lot of emotion. So people don't necessarily want a car like this, but it has certain advantages."

At first glance, Urbee doesn't look like the sort of car you'd find at a local dealership – nor is it likely to be found there anytime in the near future. Weighing about 1,200 pounds and sporting just three wheels, it's about the size of those two-passenger sports cars that Kor coveted as a teenager, slightly long than a contemporary smart car and narrower than an old MGB.

The team gained significant notoriety when it participated in the X Prize competition. It is currently working on Urbee 2, with the aim of designing a model by 2015 that can travel across the United States in just two days, carrying two people (and a dog). It would use just 10 gallons of biofuel to supplement the electric engine. 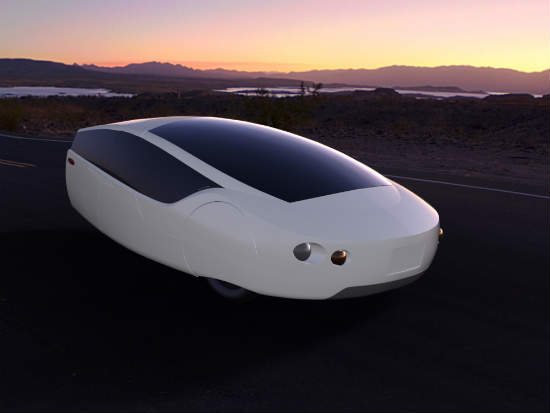 A radical approach for design and production

Urbee is actually Kor's third radical vehicle design, officially championed by his company, Kor Ecologic. His team's first two concepts were for railed vehicles that required tracks to run. But one night during a dinner discussion dedicated to debating various research projects, one of Kor's colleagues challenged Kor to put one of those railed designs on the road. He was skeptical, but rose to the challenge.

Clearly, the Urbee represents a disruption in automotive design. But the way Kor Ecologic choose to prototype and produce the vehicle is equally disruptive.

Although he considers himself a "late adopter" of technology, Kor fixated on the potential of stereolithography – the predecessor to what we now know as 3-D printing – decades ago. 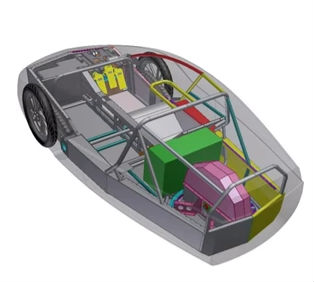 By using this approach to imagine the Urbee, the team was able to concentrate on making the vehicle light enough to run on renewable energy but strong enough to be safe.

While other designers have used this approach for prototyping, Kor Ecologic followed the process to its logical conclusion: It is building the actual car chassis out of molten polymer. This allowed Kor to imagine what might be, without worrying about the limitations of specific materials or traditional manufacturing processes.

"I found it really liberating thinking of these 3D printers as a production tool. I had to learn all these different rules with all these different processes over the years, and there's a lot of them," Kor said. "You can't do certain things with fiberglass. You can't do certain things with sheet metal. That's just the way it is. And here you have a machine that can make almost anything."

Kor Ecologic's partner in this experiment is RedEye, an on-demand 3-D printing that uses technology from Stratasys -- the same company that just acquired MakerBot in a bid to drive these technologies into mainstream adoption.

With the original Urbee design, the Kor Ecologic team focused on physics and aerodynamics. Now it's working on the details, such as heating and cooling systems and windshield wipers. And it isn't relying on conventional wisdom to dictate its approach. "We are trying to design parts that you can't make any other way except for on a 3-D printer," he said.

The limits of Kor's imagination, it seems, are limited only by financing – it apparently cost some $50,000 to create the first prototype. He speaks giddily of the possible breakthroughs in design, the capability to create structures as aerodynamically perfect and complicated as a bird's wing. "Why would you look for the answer with modeling software, if you couldn't build it?" Kor asks.