About 18 million people receive reports from utilities that compare how efficient their household is to neighbors. The company behind those reports -- Opower -- is now taking on the task of reducing electricity use during peak times.

Commercial demand response providers, such as EnerNoc and Comverge, operate what are in effect virtual power plants. They aggregate power reductions across many customers and bid those saved megawatts into the wholesale energy markets against conventional power generation.

Demand response has become a vital tool to keep the lights on during very hot days when the air conditioning load spikes and power generators struggle to meet demand. By reducing power for a few hours a day, utilities can maintain stability and avoid turning on dirty and expensive auxiliary power plants during peak times. Grid operator PJM, for example, last week broke a record by taking nearly 6,000 megawatts off the grid last Wednesday, the equivalent of five nuclear power plants’ generating capacity.

Residential demand response programs typically give utilities control over consumers’ air conditioners to adjust temperature settings during the afternoon and early-evening hours. In exchange, consumers get a reduction on their electricity bill. Opower’s software is more flexible and doesn’t require a dedicated HVAC controller device to be installed. It does, however, rely on smart meter data.

Opower’s system, called Behavioral Demand Response, sends notifications to customers the day before an expected peak-reduction event, either by phone, text, or email. Consumers can manually change the thermostat or take other energy-savings measures, such as turning lights off or scheduling the dishwasher to run at night. After the peak event, consumers receive a report showing on a smart phone, PC, or tablet how much energy they saved and what the financial benefit was. 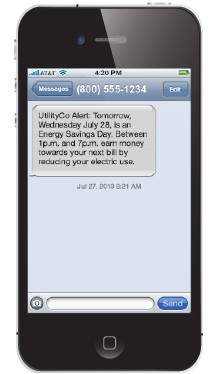 Opower’s claim to fame has been its use of behavioral science and data analytics to motivate consumers to save energy. Comparing energy use to neighbors and national averages, for instance, has proven to be an effective way to encourage people to take advantage of rebates for buying efficient appliances or doing a home energy audit.

Similarly, in demand response, it can customize the communication that comes from the utility, says Kevin Hamilton, senior director of devices and real-time services. Big energy users, for example, may respond better to a chart showing total energy savings, while a household that consumes less energy may be motivated by comparison to others. The company builds profiles based on consumers’ participation in energy-efficiency programs, size of the home, billing information, and power usage, which smart meters report every 15 or 30 minutes, says Hamilton.

Earlier this summer, Baltimore Gas and Electric (BGE) used the software four times in a trial of 300,000 customers. Just as in commercial demand response, the utility can bid those aggregated power reductions into the wholesale markets. The revenue it earns funds the rebates that go to consumers, according to Neel Gulhar, smart grid program manager at BGE.

BGE has a strong incentive to make this program work. Reducing peak power demand was one of the reasons regulators signed off on its investment in smart meters. It intends to roll the software to its 1.2 million customers next year.

In the trial, Opower found that its software doesn’t reduce as much power as the air conditioner direct control approach in a given home, but it can scale to more people. A direct load control program may only reach 10,000 homes but Opower’s software system can send communications about peak events to all of a utility’s customers, Hamilton says. Opower estimates its software is 60 percent cheaper per kilowatt than traditional residential demand response.

Many utilities are eager to use more demand response, which keeps power prices down and reduces pollution. But in general, utilities aren’t particularly well skilled at engaging consumers, or getting them to pay attention to energy usage outside the moment they receive a monthly bill.

Opower certainly isn’t the only company working to improve residential demand response. Smart thermostat maker Nest, for instance, launched an offering with three utilities earlier this year. But Opower does have a head start in figuring out how to talk about energy to consumers. And effective communications will help energy efficiency technology work at larger scale.

To learn more about the smart grid and the convergence of sustainability and technology, be sure to check out VERGE SF Oct. 14-17.

This article has been updated since it first published to reflect new information from Opower, including a correction of the estimated savings of demand response programs.

Honeywell and Opower team up on smart energy

How Can Utilities Get Customers Engaged with the Smart Grid?