There are many things that citizens of developed nations take for granted, including seemingly simple pieces of infrastructure, such as streetlights, that actually work as promised.

But when it comes to new construction projections, their installation isn't always a trivial matter.

Aside from what you see above ground casting light on parking lots or sidewalks, traditional lighting might require developers to lay yards upon yards of new cabling and power supplies -- and dig up tons of dirt to do so.

That's where off-grid street lights powered by small solar or wind energy generation sources and controlled with wireless sensors come in. Not only does the technology offer independence from the integration constraints and costs of the local electrical grid, it often can be managed remotely, which leads to maintenance savings. Plus, by relying on an independent source of power, they are likely to stay on, even if there is a systemwide blackout in the area.

One player addressing this market head-on is Illumient, a division of Toronto-based Clear Blue Technologies.

In July, the company lit up a demonstration project that will test two LED, off-grid streetlights powered by solar and wind: The technology was installed over the summer at the sales office for the Aqualina condominium project on Toronto's waterfront. The condos are the first phase of a $1.1 billion, 13-acre neighborhood being built by Tridel and property management company Hines.

Their installation was arranged by TowerLabs MaRS, a nonprofit green building accelerator associated with Tridel, one of Canada's biggest condo developers. Tridel and Hines plan to seek a LEED Platinum green building certification for the project, which will include 363 residential suites.

The two lights being tested in Toronto, probably over the next two years, use wireless controllers and communications services from KORE Telematics to transmit real-time usage data that James and the Tridel staff can view and manage using a cloud-based monitoring and reporting service. One light uses solar only, while the other uses a combination of solar and wind, so the differences will be compared over time.

The builder will use the information to assess the potential value of additional installations by Tridel in other locations; potential buyers also will be able to view the information by using a touchscreen at the sales office (an example is shown in the graphic accompanying this story). Their reaction also will help influence future adoption. 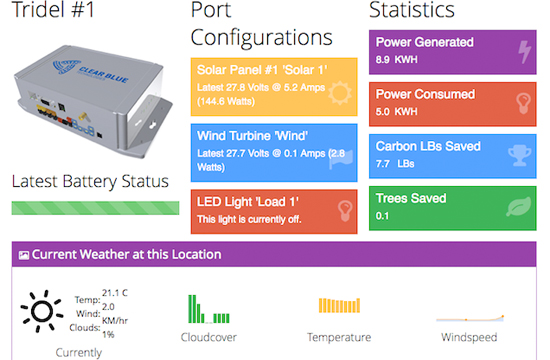 Aside from Illumient, the Toronto demo project involves Daisy Energy, which develops energy management analytics solutions and dashboards; StressCrete, which supplied the poles; and Efston Science, a local solar and wind technology installer.

Up to 60 percent of the costs associated with outdoor lighting installations may be related to these so-called trenching costs, she estimates. As a result, Tuerk believes that at least 10 percent of streetlight installations will move off grid, especially for new construction.

While the investment required for an Illumient installation will depend on factors such as the overall solar and wind potential for the geography, the investment case is pretty easy to prove if you include all the infrastructure needed for the traditional approach, she says.

And, over time, Tuerk adds, the remote management capabilities will help installations pay for themselves in the form of reduced maintenance costs.

Diving into the solar microgrid revolution