While they make up a tiny slice of the automotive market, U.S. sales of plug-in electric vehicles are hot: up 147 percent between August 2012 and August 2013. But at an EV industry event Monday in San Francisco, the big news from Coca-Cola was cold. The beverage company announced it is launching a fleet of 16 refrigerated electric trucks, which will be used to transport Odwalla beverages around the Bay Area.

The trucks, manufactured by Smith Electric Vehicles in Kansas City, will be deployed by year's end and will mark the first fully electric refrigerated truck fleet in the country, said Sonya Soutus, Coca-Cola's senior vice president of public affairs.

The beverage company already operates a number of alternative fuel fleets in North America, including more than 650 hydrid trucks as well as vehicles that run on compressed natural gas. But the electric chillers displace the conventional diesel-powered transport refrigeration units (TRUs) which create a significant source of air pollution in transport hubs. The California Air Resources Board is working to better control these through graduated performance standards through 2019.

TRUs are "like a lawnmower running on top of your truck," said Jim Neu, fleet manager for Coca-Cola's Odwalla Market Unit.

Neu said the Smith trucks employ eutectic cold plate technology, which chills the air using a series of aluminum beams that circulate a refrigerant. The chiller is powered by a electric system that operates independently of the electric motor and batteries used to power the truck.

Electric-powered truck refrigeration is not new; it's a 50-year-old technology, said Smith Electric CEO Bryan Hansen. But improvements to cold plate technology have made it much more compelling to fleet managers in recent years. The chiller system is powered overnight, while the truck's batteries are recharging.

"Then, then you use the cold plate system as your source of refrigeration inside the truck all day, and you only need to run fans to keep the cool air circulating," said Hansen. "You don't need to add batteries to the truck, which saves weight and keeps costs down." 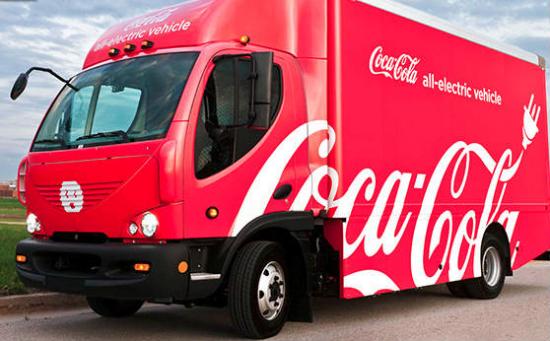 The trucks can be driven 60 to 80 miles on a single charge, depending on the terrain and the amount of cargo being carried, he said. Using a 240-volt (level II) charging station, the trucks should take 8 hours to completely recharge. This fits into the truck's use case, as it is can be charged overnight while not on the road.

"Frito-Lay and other companies use light electric-powered trucks for deliveries, but carrying perishable food [such as Odwalla beverages] is a specific challenge," said Neu. "We piloted one of these trucks for 13 months" before deciding to purchase the fleet, he added.

That the trucks performed well is important, but perhaps a bigger trigger for Coca-Cola's commitment was a combination of Department of Energy grants and discounts through the California Hybrid and Zero-Emission Truck and Bus Voucher Incentive Project. While he did not share a specific price, Neu estimated that after these incentives the Smith trucks were roughly $10,000 more expensive than comparable diesel-powered alternatives. He expects that fuel savings and low maintenance costs will provide a return on the investment into the trucks within 3 to 4 years.

Of course, as with any new technology some long-term questions are as-yet unanswered. For Neu, one point of concern is how long the trucks' batteries will hold up and how they will be disposed of, or reused, once they no longer perform adequately in the fleet. Used batteries have shown promise as energy storage for alternative energy systems or for electrical grid back-up.

Hansen said it has sold larger fleets of its electric trucks, but Odwalla's, which will consist of the Smith Newton model, will be the largest fleet with electric chillers. "If you have an electric truck and you add a conventional diesel-powered compressor, it's no longer a zero emissions vehicle. We see [electric] refrigeration as a growing segment for us. The Odwalla fleet will be a demonstration to others," said Hansen. "When people see Coca-Cola committing to this, it will move the industry forward."

Coca-Cola announced news of the fleet during a press conference following a private meeting between California Gov. Jerry Brown and a group of 50 corporate executives as part of a Drive the Dream media event hosted by the California Plug-In Vehicle Collaborative.

All-Electric Trucks Roll Out in DC