When Superstorm Sandy hit the U.S. last year, causing some $65 billion in damage, it also hit companies' pocketbooks. Johnson & Johnson lost a week's worth of employee productivity due to the storm, and Abercrombie & Fitch estimates it lost out on $10.7 million in store and direct sales.

Instead of just accepting losses like that as something that happens, these and other companies are taking a proactive look at climate change and the risks -- as well as opportunities -- posed by climate-related weather disruptions, regulations and consumer changes.

Companies that have made the environment and sustainability central to their businesses strategies are seeing higher profits while also better positioning themselves for an uncertain future, says the CDP S&P 500 Climate Change Report, the latest update on greenhouse gas emissions and climate strategies from the biggest corporations in the U.S.

The report is based on responses from 334 companies on the Standard & Poor's 500. The CDP -- formerly known as the Carbon Disclosure Project, but rebranded due to a new focus beyond just carbon -- requests greenhouse gas and climate data from companies on behalf of 722 investors that represent $87 trillion in investments. 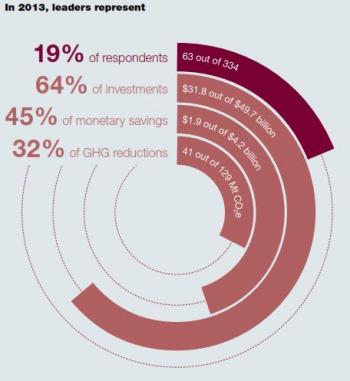 The CDP is seeing an overall push toward incorporating environmental and climate considerations from top-level governance on down, coupled with enhanced understanding of risks and opportunities posed by the future. More than 90 percent of the S&P 500 companies responding to the CDP have board-level oversight regarding environmental, social and governance issues. Eighty percent have woven climate change into business strategies, and nearly 90 percent are adding climate change to their risk management in some way.

Another factor tying leading companies together is goal-setting. While 70 percent of respondents last year had carbon reductions targets, 75 percent reported targets in 2013. More companies have intensity targets (based on a ratio of emissions to revenue, square footage or other factor) than have absolute targets. While intensity targets allow for better comparisons among peers, the CDP notes they don't guarantee lower overall GHG emissions.

To work toward their various goals, S&P 500 companies invested $50 billion -- about 4 percent of their annual capital expenditures -- in emissions reductions and energy-saving projects. That's resulted in GHGs being reduced by a little over 6 percent and monetary savings totaling $4 billion. The biggest money savers have been product design innovations, energy efficient processes and transportation fleet changes.

Clorox, for example, has made alterations to its bleach packaging and processes to use less plastic, paper and water. Out of a $3 million investment, the company has saved $5 million so far.

While most companies have taken steps to reduce emissions and save money, just 20 companies accounted for $3.5 billion (or 85 percent) of the monetary savings reported, and another 20 were responsible for almost 90 percent of the carbon reductions.

The CDP notes that while the lingering effects of the economic slowdown contributed partly to the 6 percent drop in emissions, it also was brought on by less coal use, an increase in natural gas and renewable energy use, energy efficiencies and changing consumer habits. The CDP also points out that the U.S. gross domestic product has been growing an average of 1 percent year.

"Since economic growth resumed, the old notion of emissions reductions and increasing GDP being mutually exclusive has appeared less valid," the report says.

On the leading edge

From the company responses, CDP culls the best of the best and names them to its Climate Performance Leadership Index and Climate Disclosure Leadership Index. The disclosure list contains those that provided the most comprehensive details about their emissions measurement and management programs, their climate strategies and their risk management processes. The performance list, meanwhile, goes beyond mere reporting and strategies to list the companies doing the most to mitigate and adapt to climate change.

For this year, the number of S&P 500 companies on the performance index more than doubled, from 16 to 36. The CDP also raised the bar for being on the disclosure index, and still 12 companies were added. The average score of all respondents increased 21 percent to an average score of 56.

The 63 companies that make up the two lists (25 are on both) are called out as leaders for good reason. Those companies accounted for 64 percent of climate investments, 45 percent of savings and 32 percent of GHG reductions reported by the 334 that were surveyed.

The CDP notes that those companies share a few key characteristics, such as monetary incentives for emissions reductions, formal targets in order to enhance accountability and climate change included in risk management strategy.

The CDP also called out BNY Mellon, Cisco, Entergy and Eaton for offering the most complete reporting.

Eyes to the future

The biggest risks noted are precipitation changes and droughts, tropical cyclones and reputation. The notable potential impacts from those are higher operating costs and reduced demand for products and services.

Both Goldman Sachs and Molson Coors are looking at droughts in different ways. Goldman Sachs' air conditioning -- managed by cooling towers -- for its primary data centers could be disrupted, and Molson could see changes in its barley harvest.

The largest opportunities, meanwhile, lie in consumer behavior changes, reputation, and product efficiency regulations and standards, which all hold potential higher demands for both existing and new goods and services.

The Home Depot reported to CDP that it has sold $6 billion worth of energy-efficient products, and estimates that a 5 percent shift in customer buying habits could account for some $300 million in energy efficiency-related sales.

It's not just in the U.S. that corporations see benefits from taking a holistic approach to climate change. Companies worldwide that are more transparent about their impacts, goals and strategies are seeing better financial performance, says "Linking Climate Engagement to Financial Performance: An Investor’s Perspective," another CDP report released Monday, based on disclosure scores from 702 companies that have been in the CDP's Global 500 reports since 2008.

The CDP split up worldwide companies based on their industries, and then divided them further based on their CDP disclosure scores, comparing them all against financial metrics.

The industry leaders in terms of CDP scores all saw higher returns on equity, stable cash flows and higher dividend growths than companies with lower scores.

"Our analysis provides investors with further evidence on the link between sustainability and financial performance while providing corporations with additional incentives to take action on climate," the report says. "Given that improved profitability, cash flow stability and dividend growth reflect strong financial operating performance, we conclude that strong corporate engagement on climate change is mirrored by stronger corporate financial performance."

With companies nailing disclosure, it's time to tackle performance

Big Gap Between Climate Awareness and Action for S&P 500