Boston ranks No. 1 on efficiency as state surges on renewables

Boston ranks No. 1 on efficiency as state surges on renewables

Under Gov. Deval Patrick, Massachusetts has risen to become the most energy-efficient state in the U.S., and now Boston has been identified as the most efficient city by the American Council for Energy Efficiency (ACEEE).

"What's exciting is the quickening pace of these efforts," lead author Eric Mackres told USA Today. "Over the past five or so years, cities are rediscovering how important energy efficiency is to their economies," spurred by the federal Recovery Act which gave them funds to test potential solutions.

• Citywide efficiency goals with systems that track progress;
• Stringent building energy codes, backed by enforcement and incentives, and requirements for reporting; and significant programs to make energy upgrades easy.
• On transportation, policies focus on smart growth development and multi-model transport from bikeshare programs to investment in public transit and programs to transition to efficient vehicles and freight infrastructure.
• Strong partnerships with utilities that promote and expand energy efficiency programs.

ACEEE makes the point [PDF] that all cities have lots of room to become much more energy efficient.

In May, Boston became the eighth city to require buildings to report on energy and water use each year.

The state's four utilities are pooling resources to buy 565 megawatts (MW) of renewable energy for the state from projects that will be spread across New England. The contracts will supply 170,000 Massachusetts homes and came in under $0.08 per kilowatt hour as a weighted average.

Utilities are buying the energy because of a 2012 state law that requires them to sign long term contracts that provide 4 percent of the energy supply from renewables.

"By pooling the resources of all the utilities, we are able to purchase a large amount of renewable energy for the state at below-market prices," says Ronald Gerwatowski, National Grid's senior vice president of U.S. regulation and pricing. 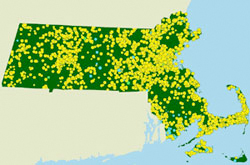 Gov. Patrick announced that renewable energy jobs have grown 24.4 percent in the past two years. There are now 5,557 local businesses employing nearly 80,000 people.

Solar in Massachusetts is growing impressively:

The overwhelming majority of job creation over the past year comes from new entrants into the sector, including startups, the government's 2013 Massachusetts Clean Energy Industry Report says. The industry is growing eight times faster than other industries in the state.

As a comparison, this is twice the natural gas jobs in Pennsylvania and even more than the 64,000 jobs the fracking boom has created in North Dakota.