Clean energy advocates almost universally revere Germany, myself included. Oft-heard declarations include: "Did you know solar energy costs half as much in Germany as it does in the U.S.?"

Well, I'm going to talk about Germany again, but this time the tagline is quite different. Germany may only install 3.9 gigawatts of solar in 2013, down from 7.5 GW last year. That means the U.S. finally might install more solar in a single year than Germany.

This decrease is largely attributable to a fundamental shift in the value proposition of solar in Germany. Understanding this dynamic provides perspective on perhaps the most contentious renewable energy topic in the U.S. today: net energy metering (NEM). With net metering, electric utilities provide credit to customers with solar PV systems for the full retail value of the electricity they produce. If a customer produces as much electricity as they consume, their bill "nets out" to zero or to any minimum monthly customer charges. That means customers don't pay for electricity, but it also means they aren't paying anything towards the utility's fixed costs, such as existing generating assets that produce electricity when the sun isn't shining or distribution lines.

As more customers zero out or dramatically reduce their bills with net energy metering, fewer customers cover these fixed costs and rates are raised. To most utilities, this doesn't make much sense because solar customers still rely on the grid for much of their electricity demand.

The German solar market: FiT for a change

FiTs help governments meet certain capacity targets. Like most subsidies, they phase out over time by offering a lower price per kilowatt hour (kWh) as different targets are met, resulting in an annual decline of FiT levels. Germany's FiT for residential systems is set at $0.20/kWh, 2.5 times lower than in 2010.

Unlike the situation stateside where customers are credited for their solar generated electricity at the full retail electricity rate under NEM, most German systems only are credited at the current FiT rate ($0.20/kWh). German residents, on the other hand, pay on average $0.36/kWh for electricity in their homes. This discrepancy is the primary reason why German solar businesses are developing new product offerings. 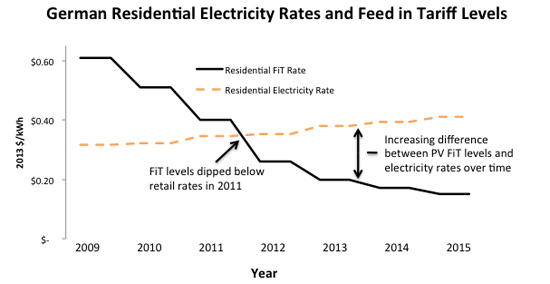 Could self-consumption be the answer?

Enter an old concept that has yet to break into U.S. vernacular: self-consumption. It's simple. Instead of feeding all of your system's solar energy production back into the grid and being credited for each kWh at the FiT level, solar installation companies configure a PV system using an additional meter so that each kWh produced by your PV system gets special treatment depending on where it's used:

Switching from FiT to self-consumption is only a small part of the financial equation. With self-consumption, building owners and tenants are incentivized to use as much solar electricity on site as possible. This means doing things such as installing east-west facing systems that better match the load, purchasing home energy management systems that time appliance use to solar production, and, at the far end of the spectrum, installing battery storage systems. These technologies allow German customers to go from using one-third of their solar electricity on site to up to 75 percent on site.

Self-consumption also drives energy conservation because the more families and businesses conserve energy, the greater share they can displace with their own solar generation. This can increase demand and grow the market for energy efficiency and management devices.

Self-consumption in the U.S.

Germany's conditions, where retail electricity rates are increasingly higher than for solar, could be just around the corner in the United States because of growing interest in net energy metering from utilities and regulators. Self-consumption has the potential to amelioriate many issues associated with NEM. Besides providing fair compensation for both the customer and the utility, self-consumption also helps mitigate the cross subsidy issue of non-solar customers picking up the tab of solar customers who still use the grid, by assigning clear value to different sources and uses of energy.

Self-consumption won't manifest here overnight for two main reasons. First, there's a massive absolute cost difference: the average residential electricity rate in the U.S. is $0.13/kWh, just under one-third of Germany's, so the impact of offsetting retail rates instead of using a specialized tariff aren't as drastic in the U.S. Second, utilities, or perhaps public utility commissions, would have to approve self-consumption by clearly delineating billing structures and agreeing to some kind of value of solar rate as described above.

But these limitations can be overcome, probably before 2020. If PV system costs are able to hit the Department of Energy's SunShot targets, solar will have a compelling value proposition in spite of our "low" electricity rates. As U.S. utilities and solar advocates search for the next step beyond net energy metering, we should learn from our European counterparts who are dealing with these issues now. Finding system configurations and rate structures that are fair to all stakeholders, including the non-participating solar customer and the utility, are few and far between.

And while self-consumption is not a panacea, its potential benefits to multiple stakeholder groups make it worthy of further consideration, especially as the net energy metering issue comes front and center for more utilities across the country.

To learn more about renewable energy and the convergence of sustainability and technology, be sure to check out VERGE SF Oct. 14-17.