The idea of using microgrids to protect against power outages is gaining more credibility in states including Connecticut and New Jersey.

Businesses also are studying the technology closely, especially as an energy storage component of on-site renewable energy installations. One of the first companies to actually proceed is Konterra Realty in Maryland.

This month, it commissioned a 402 kilowatt (kW), 1,368-panel solar array combined with a 300 kilowatt hour (kWh) grid-interactive, lithium-ion energy storage system from Solar Grid Storage to help offset 20 percent to 25 percent of the power needs at its 130,000-square-foot headquarters building in Laurel, Md. The technology also will allow critical systems to remain powered during an outage.

The installation was handled by local residential and commercial installer Standard Solar. The roughly $2.5 million needed to make it happen was financed with funds from the Kingdon Gould Jr. family (which is involved with Konterra Realty), as well as through a Maryland Energy Administration "Game Changer" Grant and an investment for Solar Grid, said several executives involved with the project.

"We have been considering this sort of thing for quite some time, in several different locations," said Melissa Gould, Konterra Realty's director of sustainability initiatives. "This opportunity came forward as part of a new formula. We were financially helped by the grant in getting us over the hump."

Maryland's renewable energy portfolio standard calls for the state to source 20 percent of its power from solar, wind and other renewables by 2022, and the Konterra Realty project will help contribute to that overall goal, which is one reason it was able to snag the grant. 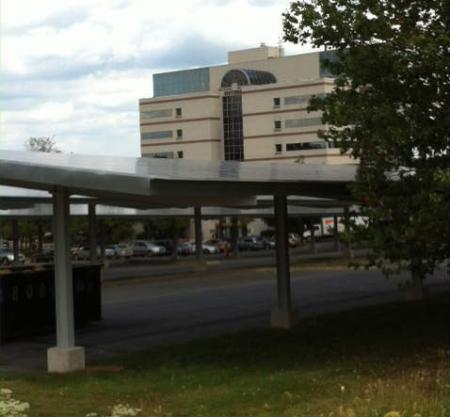 "As one of the nation's first commercial microgrids, this project can truly be a game changer for PV [photovoltaics]. Not only does it provide backup power to Konterra, it also supports grid integrity and allows for participation in ancillary markets for electricity."

From a global perspective, the market for coupled solar and energy storage solutions is poised to grow to $2.8 billion by 2018, projects Lux Research in a September report about the market. The United States will be the third largest market after Japan and Germany, with approximately 75 megawatts (MW) of integrated systems installed by that timeframe, Lux projects.

Richard McCoy, executive vice president and principal of Konterra Realty, said energy efficiency and green building practices have been a focus for the company since at least 2007, when Konterra Realty committed to certifying all new construction to at least the Gold level under the U.S. Green Building Council's Leadership in Energy and Environmental Design (LEED) program.

"We saw this project as an opportunity to get a reasonable return, while contributing to our goal" of being better stewards of the environment, McCoy said.

The grid storage concept was the extra boost that Konterra needed to win the Maryland grant, said Caleb Gould, vice president of the real estate company. "It was a very collaborative project where at the end of the day, we were able to achieve a payback threshold that allowed us to explore the funding available," he said.

The building's roof wasn't actually a good candidate for panels, so the company invested in carports with integrated solar, providing covering parking for its employees and giving it the ability to show off the technology more easily to visitors, Melissa Gould said.

The initial installation also includes two electric vehicle chargers from SemaConnect, and conduit for adding four in the future, should conditions dictate. "It’s the perfect closed loop of green transportation, in that you know the EVs are using green power," Melissa Gould said.

A management dashboard will allow Konterra's management team to keep tabs on the amount of power being generated and its impact on how much the building needs to draw from the grid. It also will help the organization work more closely with the local utility to shed loads during periods of peak demand and to offer frequency regulation and volt-ampere reaction compensation.

As the combined solar and microgrid system comes online, Konterra isn't certain yet how long it will be able to stay up and running in the event of a local grid outage: it believes it will be a minimum of about 30 minutes, depending on the loads that are ultimately tied into the platform, Caleb Gould estimated.

To learn more about microgrids and the convergence of sustainability and technology, be sure to check out VERGE SF Oct. 14-17. Image of energy meter by Daniel-life via Shutterstock

Batteries included: The 'grid of the future' takes shape

10 questions to ask before you build a microgrid