A coalition of businesses and nonprofit organizations led by Coca-Cola has pledged to deliver up to 2,000 off-grid water purification systems to rural communities in 20 countries by late 2015.

The strategy aims to deliver an estimated 500 million liters of safe drinking water to these locations and to provide entrepreneurial opportunities for up to 5 million women in the process, which is the high-level goal of Coca-Cola's 5by20 program. 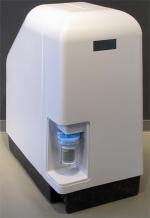 Two types of units are at the center of the initiative, which Coca-Cola developed in collaboration with Segway inventor Dean Kamen's DEKA R&D venture. The first is the Slingshot, a small unit that uses vapor compression distillation to turn dirty water from any source into potable water.

The second is an even more ambitious concept called the EKOCENTER, a modular kiosk made from a 20-foot shipping container that provides clean water with the Slingshot technology, along with other services, such as wireless communications or even clean, off-grid electricity.

One Slingshot unit can purify up to 300,000 liters of water each year, enough daily drinking water for 300 people. It can be powered with any sort of energy source that offers up to 1 kilowatt of power.

A pilot installation of EKOCENTER already is running in Heidelberg, South Africa, and another is planned by the end of this year (the site hasn't been disclosed).

"Through EKOCENTER, we have the ability to change lives by offering access to safe drinking water and other needed resources, all while empowering local entrepreneurs," said Coca-Cola Chairman and CEO Muhtar Kent when the commitment was disclosed in late September. "What started as an aspiration is now becoming a reality as we welcome our partners across the golden triangle of business, government and civil society to scale and improve this innovation." 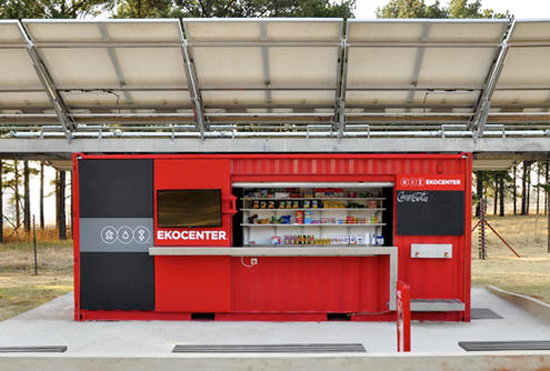 It takes a village

Aside from Coca-Cola and DEKA, more than a half-dozen high-profile organizations are involved in making this happen. Here's a rundown of the participants, along with the role each will play:

Coca-Cola: Site selection, installation and maintenance in conjunction with its bottling partners

IBM: Technology services and business consulting, including research for how communities can treat return water

McHann Health: Creation of micro-business models for communities running EKOCENTERs, along with messaging around related health and sanitation issues

NRG Energy: Solar panels and energy storage to provide a clean source of off-grid power for each EKOCENTER; NRG is also working with DEKA on something called Stirling, an engine that can run off fuels including gasoline, E85 ethanol and other biofuels, propane, natural gas and methane

TechnoServe: Strategic advisory services, including a metrics-based evaluation plan to monitor the progress of the EKOCENTER rollouts

"Few projects to date have so ambitiously vowed to help rural communities through such a tightly linked partnership structure that incorporates world-renowned organizations from the public, private and civic sectors," Kamen said. "We hope additional organizations will join us to expedite the positive impact the project will have on communities globally."

The EKOCENTERs will find homes in Africa, Asia, Latin America and North America. The criteria for choosing the sites include an evaluation of the community's existing clean water options, the climate surrounding local land use and acquisition regulations, the working capital available in the region and the availability support resources to help during the rollout, said Derk Hendriksen, Coca-Cola's general manager of EKOCENTER and Slingshot.

The site in South Africa, for example, was chosen because it's near one of Coca-Cola's Valpre spring water plants. "It is a farm that has excellent training facilities already," Hendriksen said.

While he refrains from saying how much the project will cost each year, Hendriksen said the private-sector partners behind this initiative will provide much of the equipment and deployment services. "Then, we are working with a variety of advisors and backers that give us contributions to reduce the absolute cost of the unit," he said. "The burden on the community is minimal, if not zero."

The benefits, however, should come in the form of fewer waterborne-related deaths and illnesses, enhanced waste management, extended access to mobile technology and the Internet, and up to 1,050 direct and indirect jobs in these locations.

"At the highest level," Hendriksen said, "businesses can only be as healthy as the communities they are serving."

All images from Coca-Cola

How to fix the 10 worst wastes of water