Adam Michael Daw came to HackCitySF 2013 because he likes to get his hands dirty writing code.

“You get to meet other developers and designers, see new problems and take on new challenges,” said the software development manager. “These types of events are a great way to expose yourself to markets you might not look at otherwise.”

This was the energy at play at HackCitySF, a volunteer hackathon organized by GreenBiz in late September as a run-up to next week's VERGE SF conference. Held in San Francisco at Code for America, the weekend event awarded prizes for solutions that promise to improve lives and address environmental and social challenges.

“It's important to have this mini amped-up brainstorming session,” said Daw, who won first prize in the competition. “What kinds of applications can we provide to make use of this new information?”

“Who is the audience?” asked Krys Freeman of GreenBiz. “Who are some experts in the field? And if you know what data there is to address this, put that up there, too.“

“I’m a big believer in APIs (application programmatic interfaces) as a way to create more opportunities and value,” she said. “This way, someone can build something on top of what you’ve done. Each party can take their thing so far, and someone else can see that arc and take it further.“

This is the hacker ethic at its core. 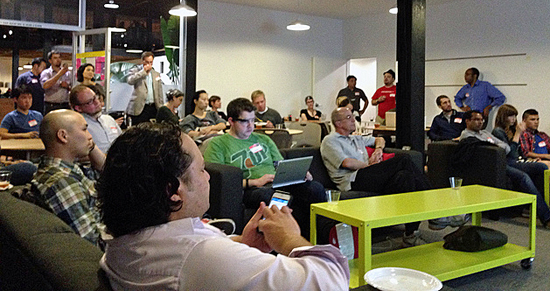 Another organization with an eye on API development is Salesforce, which recently released an API for mobile development to complement its DeveloperForce suite.

“It was a surprise, even to developers, that Salesforce provided a means for people to develop products that could serve environmental and sustainability needs,” Freeman noted.

Salesforce sustainability analyst Tom Fisher said he would like to see more applications for its sustainable building operations. The company has built apps on its cloud-based data management platform, and hopes to encourage others to do the same.

A peek at the hacker tools

The Building Performance Database includes an app that allows anyone to register and access the data, and the new API debuted at HackCitySF, which enables new apps to be developed.

“The database is the largest database of buildings in the United States, and soon to grow by a factor of 100,” said Aleck Landgraf, a consultant who works on the project. What the database provides is a way to compare buildings – on energy use as paired with asset types, such as heating systems -- in a way you couldn’t do otherwise."

The winning teams I spoke with reported that, aside from a few technical issues later resolved, most of the tools were pretty straightforward to use.

A temporary exception was Google-Glass, the new development and interface paradigm available only to Glass Explorers. Its API was partially released, in beta, or testing form. Hacker and Glass-owner Joe Sterne and his team designed its winning app around the Google Glass digital eyeglasses.

Sterne let me put on his Glass and experience its voice-controlled interface, innovative corner-of-the-eye display and side-of-the-head audio channel. The look and feel was cooler than I’d expected, and the value for data-informed, real-world physical work application was obvious.

Other goodies on the hackers’ table included the Panoptix API by Johnson Controls, which was featured at HackCity 2012 and built upon by the app that won first prize this year. Other APIs and software toolkits included open datasets contributed by the City of San Francisco and others. 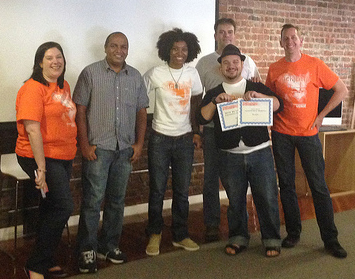 I returned to the Hack on Sunday just in time for the pitches and prizes. Buzzing with energy, the development teams took time to chat. Keep in mind Daw’s reminder: “None of these applications are ready to be deployed. They are all ideas in one stage or another, on the path to fruition.”

EnvirAudit: This first prize winner was recognized for its “Best use of Salesforce (Mobile).” It also won the “Best Use of an Existing Code Base” category for its work with the Code for America Commons. Led and implemented by Daw, EnvirAudit brought together the DOE Building Performance Database, Panoptix building management data schema, Salesforce’s Developer Force data management platform and its new mobile app API.

“The building is really the central focus of things,” Daw explained. Daw’s app integrated the aggregated energy-use data from the BPD with building-specific energy-use data via Panoptix.

“We have the data," said team leader Tim Quijano. "People want to be green, but maybe they’re a renter and they have to find creative ways to do it. Retrofitta opens up the door."

His team used the BPD API and the Salesforce mobile platform adapted to run in a Ruby-on-Rails environment.

“It’s definitely a space where there will be more growth. It’d be great to get out in front of the new crowdfunding policy,” represented by the JOBS Act, which allows for crowd-investing with equity. The new SEC rules went into effect Sept. 23.

HEADSeUP: Designer Sean Carter’s team took the “Collecting the Right Data” prize. It was recognized for making the best use of the featured DOE BPD building performance data. I caught up with team member Ruairi O’Connell, a user experience designer and former building architect.

"The BPD gives you buildings classified by location, climate, building type and size, and divides it by the types of building systems being used, such as heating, ventilation and lighting," he said. “It occurred to us [that the BPD data] could be used by architects and building owners to make an informed guess very, very early on as to what kinds of systems to include in their buildings ... providing a kind of rule of thumb with the benefit of data.“

Kinetic: The winner of “Best User Interface” represented a novel experiment. Sterne, the Google Glass owner, led this team to create an app that plays with what’s possible when a building manager has hands-free, real-time intelligent assistance on the ground.

“Our user is a building manager or owner of multiple buildings, who could, for example, be walking around with a contractor” while discussing retrofit options, Sterne said. Kinetic utilizes the DOE BPD and the Salesforce APIs.

School Energy IO: This team took the “Challenge Boost” prize with its app that focused on the sustainable management of school buildings. Developer Thys Michels used the Salesforce mobile API to post and aggregate device performance data gathered from sensors in a building. School Energy IO is designed to integrate with open government databases provided through Socrata, a Seattle-based cloud software company bent on democratizing access to government data.

In addition to the hackathon, the event offered some code-free mental hacking, part of a goal to involve business people. The Data Jam event focused on creating resilient cities. I joined the conversation around the Soft Story Ordinance in San Francisco. Soft Story will require roughly 4,300 building owners to have their properties assessed by an engineer for earthquake safety. This policy is an example of a more general need to make hard-to-understand city policies more accessible to the extended stakeholder community.

“I think the cause here is fantastic,” said development manager Daw. “We want to share information and we want to be able to make decisions based on that information -- and hopefully for the good of mankind.”

Underlying image by watchara via Shutterstock.

A new marketplace is in store for building efficiency apps