Las Vegas has long served as a stereotype of human excess: gambling, drinking, sex, all-you-can-eat buffets. But the latest chapter is playing out away from the strip, in the part of the valley where two decades of booming development have swelled the population to 2 million residents who rely on a dwindling water supply.

Ninety percent of the southwestern U.S. city's drinking water comes from the Colorado River, impounded behind Hoover Dam in Lake Mead. An extended drought has sucked the lake's water levels down more than 100 feet since 2000, and the pipes that convey the lake's water to the city may soon protrude into open air.

If Las Vegas' excess in trying to support the water needs of millions in a sere valley marks an extreme, its proposed solution -- boosting supply through megaprojects -- is all too common. To ensure continued water delivery, the Southern Nevada Water Authority, which manages Las Vegas' water supply, has spent the past five years boring a lower feed pipe through rock at a cost of $817 million. And to diversify supply, the SNWA also plans to spend another $3 billion to $15 billion (depending upon who's counting) to build a 263-mile-long pipeline to bring in groundwater from rural northeastern Nevada.

Other massive water supply projects are being planned elsewhere in the U.S. Seventeen desalination plants have been proposed in California alone, according to the Pacific Institute, a non-governmental organization that conducts research and policy analysis. And Dallas–Fort Worth water authorities recently proposed a series of supply-boosting infrastructure projects that could cost $21.5 billion by 2060, according to Sharlene Leurig, senior manager of the water program at Ceres, an NGO that advocates for sustainable business.

The irony is that all this expense and financial risk may not even be necessary.

Water analysts such as Leurig say the persistent impulse to boost supply is an anachronism. Many utilities' water supply managers believe they need to build new water supply infrastructure because they are using demand forecasts based upon historic use or tied to population growth, or don't forecast demand at all.

Yet in some places, including Southern California, Seattle, Dallas–Fort Worth, and even, yes, Las Vegas, water demand has either plateaued or declined even as population has expanded. "It's mythology that population growth means increase in water use," says Leurig. In fact, per capita demand has been decreasing throughout the United States since the 1980s.

Historically humans tended to settle near fresh water; civilizations that relied instead upon extensive engineering to supply water usually faded away or moved on when they used up their supply or a changing environment made their precarious system unstable. Such examples are legion: The Khmer's Angkor Wat in Cambodia. The Anasazi in New Mexico. The Maya in Central America.

Yet extensively engineered megaprojects such as the Los Angeles Aqueduct and the immense federal dams that clog rivers across the American West have built the contours of the country we know today. Thanks to water megaprojects, U.S. populations are booming in the driest areas, whereas water-rich communities, such as Milwaukee, Wis., on the shores of Lake Michigan are losing people. Without Hoover Dam, Las Vegas would still be a tiny desert oasis. Without the L.A. Aqueduct, the City of Angels would remain a dusty outpost overshadowed by San Francisco. Millions of people live and thrive in places that are naturally inhospitable to humans.

In many cases, megaprojects aren't sustainable from an environmental perspective. And they can quickly become financially unsustainable. Utilities that pursue water supply megaprojects do so at some risk because they can have unintended consequences, says Leurig. For one thing, even if a city genuinely needs new supply, megaprojects can stimulate new population growth and further exacerbate supply tensions -- much as new highways beget more traffic.

Ironically, megaprojects can also reduce demand and thereby undermine the fiscal integrity of the utilities building them. This occurs when the rate hikes required to pay off the project become an economic driver that encourages water consumers to conserve.

The Las Vegas water utility has already run into trouble with its new pipe from Lake Mead -- known locally as "the third straw." Ratings agencies downgraded nearly $2 billion of debt in 2011 amid declining water revenues, according to a December 2012 report from Ceres. Similarly, Moody's put Colorado Springs' water utility on watch for a possible downgrade for awhile in 2012, thanks in part to a nearly $1.5 billion capital program to funnel water from the Arkansas River, a tributary of the Mississippi.

Desalination plants are at risk of fueling this cycle because they produce particularly expensive water. A $158 million plant in Tampa Bay, Fla., completed in 2008 at $40 million over budget, is being undermined by lower-than-projected demand and cheaper alternative water sources, according to a November 2012 Pacific Institute report on desalination plant financing. As a result the plant often operates below capacity, yet water customers must still pay for it on their bills.

Another desalination plant permitted for Carlsbad, Calif., may never get built for the same reasons. High costs -- ballooning from $300 million in 2002 to nearly $1 billion in late 2011 -- and the availability of less-expensive alternatives have brought into question the wisdom of project financing, according to a recent report by the local San Diego County Water Authority.

So, what are those less expensive alternatives? Chief among them are conservation and reuse.

Conservation is actually a source of water -- and it's the cheapest by far. An analysis in San Diego County [PDF] found water conservation and efficiency cost from $150 to $1,000 per acre-foot, whereas desalination costs $1,800 to $2,800 per acre-foot. And there's plenty of water available in the conservation bucket: The average American uses more than twice as much water [PDF] as the average Frenchman, Austrian, Dane or German, according to a 2006 U.N. report.

More efficient technologies and policies that require their use are already causing demand to decline. For example, plumbing codes throughout the U.S. now require 1.6-gallon or dual-flush toilets rather than the old 6-gallon standard. Front-loading washing machines use less water than their predecessors. The economic shift from manufacturing toward services is also cutting water use across the country. 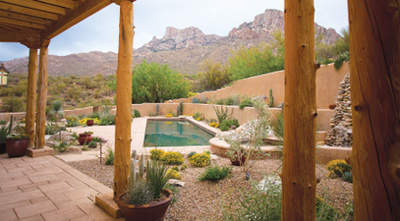 Many utilities are pushing consumption further downward with maintenance and conservation programs.

The U.S. General Accounting Office found that U.S. cities lose one-fifth of their water to leaks, so utilities can gain a lot of water -- and reduce the need for megaprojects -- just by repairing infrastructure and replacing leaking pipes and faulty meters. These projects are doubly smart because the longer infrastructure repair is deferred, the more it will ultimately cost.

On the consumer side, enticements or regulations can stop people from cleaning their sidewalks with a hose, limit car washing or nudge them to swap out lawns for drought-tolerant plants.

More utilities are also using tiered pricing to encourage conservation, charging customers increasingly more per unit of water as their water use increases. The first, say 5,000 gallons, are inexpensive. But the next 5,000 gallons will cost more, and so on.

The paradox facing water districts is how to create a rate structure that continues to incentivize conservation but also covers costs. A typical water bill addresses both fixed costs, for infrastructure investments, and variable costs, which depend upon the amount of water used. One way to increase revenue security is to hike the percentage of the bill that goes to fixed costs. Tilt too far toward fixed costs, however, and utilities lose their power to influence demand. Finding that elusive balance is critical.

The San Antonio Water System operates with this understanding. Conservation rises to the top of project choices because "our models presume that water conservation is a supply," says Karen Guz, SAWS' director of conservation.

Las Vegas, too, is seeing the wisdom in conservation. Residents currently use 219 gallons per capita per day; Las Vegas Valley Water District's goal is to reduce that figure to 199 by 2035.

A second alternative to new supply is reuse. Wastewater from one use may be clean enough to use for another purpose. Or water may be treated to less than drinking water standards and then put to another purpose, reducing the need to bring new water into the system.

San Antonio has perhaps the largest such direct-use water recycling program in the United States. Treated wastewater is discharged into the San Antonio River that wends through downtown along the famous Riverwalk. It's then used to water golf courses and a local park and to supply local manufacturers.

Industry, businesses and homes can also capture and reuse their own water. Such "distributed water" supply became possible as technological improvements shrank the physical footprint of water treatment plants as well as their energy consumption and cost, says David Henderson, a founding partner of XPV Capital, a Toronto-based venture capital firm that invests exclusively in water projects.

"We can now build wastewater plants in a manufacturing facility and then ship them," says Henderson, who says that such plants can serve off-grid users.

Some distributed users still draw water from utilities but get more than one use before sending it into the wastewater stream. For example, office buildings that use water cooling towers for climate control are starting to recycle the cooling water on site, says Henderson, periodically cleaning it so it can be run through further cycles. 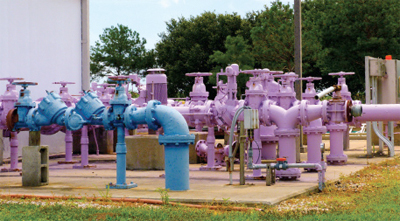 San Francisco residents are installing simple "gray water" systems to route waste streams from, say, dishwasher drainage to gardens, where they can be used to water plants. A training program for residents sponsored by the San Francisco Public Utilities Commission teaches people how to install these systems.

New construction in San Francisco; Irvine, Calif.; and other cities is beginning to use "purple pipes," essentially a second plumbing system that transports nonpotable water from things like shower drainage to the toilet for flushes.

Specific usage innovations and efficient technologies are important in increasing conservation and reuse and reducing the need for megaprojects. But more critical is the cultural shift currently underway among water utilities, away from heavy engineering and toward soft path management.

Water utilities are an engineering-dominated world, points out Juliet Christian-Smith, a senior research associate with the Pacific Institute.

"They know how to build pipelines, canals and water treatment plants." However, a huge generational turnover is on the cusp, she says. "It's a great opportunity because we have a whole different series of knowledge areas coming in. Most people who are recent college graduates will have some kind of environmental science or ecology exposure and maybe even some sustainable management training," she says.

Also critical to the culture shift is more accurate demand management and more effective utility rate structures. The Alliance for Water Efficiency is writing a handbook, due out in June 2014, about how to design a conservation-oriented rate structure and stabilize revenue at the same time. Ceres and Pacific Institute are also working on this problem.

"If they're panicked about declining sales and feel they're not meeting their operational costs, they'll cut conservation out of fear that they can't afford it," says Dickinson, "but it's the most affordable solution."

The alliance is already working with 300 utilities and plans an extensive outreach campaign after the publication of the new handbook.

Dickinson points to Australia as an example of a western country that, in response to major drought, dramatically improved the sustainability of its water management.

"There's a lot more we can do to free up water supply from waste," she said.

Welcome to Las Vegas sign by somchaij via Shutterstock.