LED lighting officially has made the list of technologies for smart cities of the future. New York City will convert 250,000 streetlights to LEDs, a move that will save the city $14 million a year and literally change how residents see their city, Mayor Michael Bloomberg announced last week.

Several cities, including Los Angeles, Seattle and Boston, already have committed to phasing out the traditional high-pressure sodium lights used in streetlights to LEDs. Bloomberg's office expects New York to be the largest conversion project in the U.S., marking a significant milestone for the adoption of LED lighting technology. The project, which began with pilot tests in 2009, is set for completion in 2017.

The improved efficiency will contribute to New York City's emissions reductions goal and reduce energy spending. But the biggest financial benefit is lower maintenance cost. LED streetlights are projected to last more than 20 years, compared to about six years for high-pressure sodium lights, which saves $8 million a year, according to Bloomberg. Energy reductions for individual LED streetlights can be as much as 60 percent, LED manufacturers say.

When New York started a pilot project in Central Park four years ago, LED streetlights were substantially more expensive and questions abounded about how well they would work. Now, the prices have come down to the point where municipalities potentially can fund these projects based on yearly savings. In New York the payback will be six years, Department of Transportation commissioner Janette Sadik-Khan said at a press conference last week. The project is being funded with $10 million from New York's Accelerated Conservation and Efficiency initiative, which expedites projects that reduce greenhouse gas emissions.

Because LEDs are still new, municipalities don't know if they will last 20 years, but they do come with longer warranties than sodium lights and require little regular maintenance. Cree, for instance, offers a 10-year warranty for its residential LED streetlights. 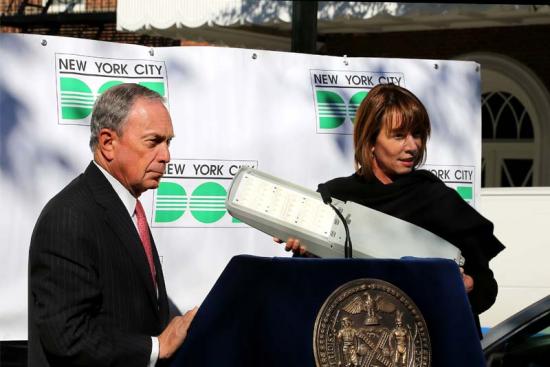 In terms of their performance, many questions over how LED streetlights compare to traditional products have been answered, Margaret Newman, chief of staff for the NYC Department of Transportation, told GreenBiz in April.

"I think the technical quality and aesthetic quality is out there, so I think it's what the future is going to be for all cities. It's not a question of whether to, but a question of what and when and how to," she said.

Unlike most infrastructure projects, converting to LED streetlights (New York already has changed its traffic lights to LEDs) is a very visible change, Sadik-Khan said. Traditional streetlights typically give off a yellow or orange light. But as cities convert to LED, they are choosing to go with a white light that will give streets and buildings a new look. Not everyone is happy with that change. During Boston's conversion, there were complaints over glare and the change in color. But in general, cities welcome the improved visibility because it can improve public safety.

As cities upgrade to LED lighting, it creates an opportunity for smart city applications to further improve efficiency and potentially the quality of life for residents.

Smart streetlight maker Echelon, for instance, has done several projects where city managers collect data to monitor the status of streetlights. Often, cities use photocells that detect daylight levels to turn lights on or off. But because they can fail, 5 percent to 8 percent of streetlights are on during the day unnecessarily, said Vijay Dhinga, director of commercial product management at Echelon. Once networked, though, they can report when there's a problem and automatically trigger a maintenance call, he said.

Smart streetlights can save an additional 20 to 30 percent on energy by using timers or motion sensors to dim lights during hours of low activity, Dhinga said. City planners also can install sensors to track noise or pollution levels to gather data for future urban development. Retrofitting LEDs for networking can be relatively straightforward if cities choose lamps with network-ready control electronics. "A smart city becomes possible because you have the infrastructure to collect street light data," Dhinga said.

For now, New York City is only focusing on upgrading its lights. But that alone is a big step toward showing that LED lighting, a technology that continues to improve and come down in cost, is commercially viable for large-scale projects.

Streetlight image by littleny via Shutterstock

NYC to Roll Out LED Streetlights

Philips teams up with mayors to power city LEDs