J&J wants to know what's happening in your bathroom

J&J wants to know what's happening in your bathroom

When it comes to sharing content or messages on social networks, many people are suckers for subjects that are cute, like kittens and babies.

So, when the Johnson & Johnson (J&J) consumer division took up the cause of recycling in the bathroom in early October, the marketing team decided to use the voices of young children in a one-minute-ish video intended to help amplify its message. It also decided to diverge from its traditional social media outreach in places such as Facebook and Twitter and blogs on its own Web site, opting for the Tumblr blogging platform to create its Care to Recycle initiative.

At the center of the campaign is a troubling statistic: While most U.S. consumers -- 7 out of 10 -- recycle items such as paper in their office, or cans and plastic containers in their kitchens, far fewer are extending this practice to personal care products and other items in their bathrooms.

In fact, fewer than one in five have gotten into this habit. What's more, 40 percent never have recycled any bathroom items; and 20 percent didn’t realize these products could be recovered this way.

All of these data points come courtesy of a survey of 1,060 U.S. adults conducted by the Shelton Group and commissioned by J&J in August 2012. The company is making liberal use of them as the foundation for its Care to Recycle initiative to encourage people to change their habits, said Paulette Frank, vice president, sustainability, for the J&J family of consumer companies.

Here's why this matters: J&J figures this lack of action results in an estimated 552 million 15-ounce shampoo bottles finding their way into landfills each year. That's roughly the equivalent of 1,164 football fields or 18,000 tons of plastic. 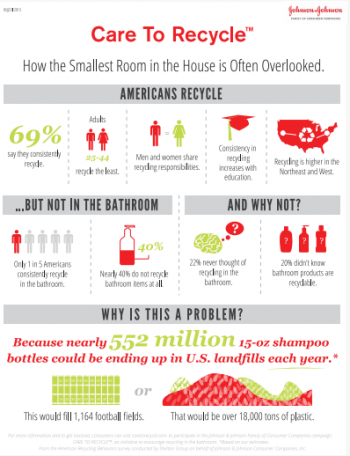 The problem, Frank believes, is awareness. “We hope it leads to a change in the automatic behavior of throwing recyclable bathroom items in the trash and a greater awareness that the health of our planet is in all of our hands," she said in the press materials surrounding the launch.

From the mouths of babes

At the center of the Care to Recycle initiative is the aforementioned video (watch below) of children encouraging adults to take action for the good of the planet's future, plus a series of tips and information that J&J is encouraging viewers and readers to share with as many people as possible.

Although Frank's team previously hadn't used Tumblr to drive its social media communications strategy, the platform's focus on sharing -- both on other Tumblr sites as well as Facebook and Twitter -- and its community of "highly engaged content seekers" made it the logical choice for the effort. "The audience is already predisposed to do this, and the content is very easy to share," she said.

Who is the Tumblr audience? Actually J&J is taking a bit of a risk by opting for this platform, which featured more than 130 million blogs as of August 2013. While more than 53 percent of the visitors are female, 47 percent of them are younger than 25, which seems like a potential mismatch in terms of audience demographics. Still, Tumblr is the largest blogging platform on the Web right now, with more than 300 million monthly visitors.

There are elements of reward and competition in the J&J campaign, which are seen as essential tools of social engagement. (Consider what TD Bank is doing internally to help make awareness for its green business initiatives go viral.) J&J refers people to other sites for the payoff, though: visitors can earn Recyclebank rewards for learning about steps they can take to change their habits in "the smallest room in the house"; and students are encouraged to take action and compete as part of Net Impact's Small Steps, Big Wins program. Earth 911 is providing specific information about which items can be recycled and where.

J&J is planning to extend the Care to Recycle branding to its product packaging, and new graphics could appear on some J&J personal care products by the end of the first quarter of 2014, Frank said.

Is Tumblr right for your company?

Right now, J&J plans to run its social media effort through the middle of 2014. The company is using three primary metrics to measure its impact, Frank said.

Should your own organization layer Tumblr into the social awareness campaigns for its sustainable business practices?

Certainly, the platform has attracted the attention of a number of big brands: aside from J&J, it's being used by eBay, Coca-Cola, Adidas, BMW and Gucci to help tell various stories, most of them targeted at the teen demographic. Various environmental movements and NGOs, such as Greenpeace, the Natural Resources Defense Council and the World Wildlife Fund, use Tumblr copiously to drive awareness of their various environmental action campaigns.

Whether J&J's message will resonate with the Tumblr demographic remains to be seen. But it's definitely a strategy that other corporate marketing teams should follow closely.

Editor's Note: This story was updated Nov. 7 to clarify the number of Tumblr visitors under the age of 25.

How To Use Social Media to Communicate Your Sustainability Wins