SunPower CEO Tom Werner has found a new friend in his quest to lower the cost of solar: a panel-cleaning robot.

The solar panel maker and project developer this week acquired a company called Greenbotics that has developed robots to wash rows of solar panels. Workers who normally use squeegees and buckets of water will be equipped with a robot that drives across the surface of solar panels, wiping dirt and dust. When the robot reaches the end of the row, a worker picks it up and places it on the next row.

The robot, which looks like a briefcase on tank-like treads, allows a crew to wash panels three times faster than today, SunPower found in tests. That’s a significant improvement for large-scale solar farms, particularly in dusty desert areas. With a cheaper way to clean panels, plant operators will clean more often and get more energy from their solar farm, says Werner. “By having more efficient cleaning, we can increase energy output by 15 percent,” he says. “So having the ability to clean more frequently can make a huge difference.”

High-volume manufacturing in China has slashed solar panel prices the last few years and hundreds of engineers are trying to boost the efficiency of solar cells. But technical improvements for cells tend to be incremental. By investing in robotics, SunPower is attacking the so-called balance of system costs, or the money spent outside actual hardware. In a big solar farm, actual assembly of the plant is more than half of the cost, Werner says. 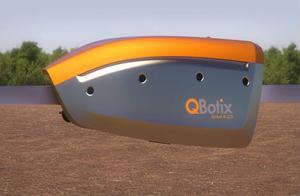 The battery-powered robot also uses substantially less water, consuming a half of a cup of water per panel, or about 90 percent less than traditional methods. This is particularly significant in water-poor desert areas with solar potential.

An industry fixated on costs, the solar business is warming to the potential for automation that robots bring. German company Serbot also makes a panel-cleaning robotic device. And SunPower intends to expand the Greenbotics team to extend the existing product line so it can clean different types of panels and to develop robots for installation, Werners says. “Almost any ground-mounted solar application over time will be cleaned this way,” Werner predicts.

Other companies are already doing robot-assisted solar panel installation at large-scale farms. Startup Alion Energy has designed a system that lays down a concrete base using convention construction machines and then, with a robot called Rover, installs solar panels that attach to the base structure with hooks and adhesives rather than nuts and bolts. It also has a second machine, called Spot, that drives over the panels to clean them.

Rover can install 200 kilowatts worth of solar panels with a four-person crew per day, which lowers the labor costs by 70 percent, says Alion Energy president and CEO Mark Kingsley. He sees automation as one of the most powerful levers for squeezing more costs out of solar. When combined with cheaper financing, automation through robotics could match the cost of power from peak-time natural gas plants, he says.

“We view what we do as the last great inefficiency to be attacked. If you think about all the billions of dollars that are put into solar cell efficiency, you’re going to get a boost from 16 percent to 18 percent or 20 to 22,” he says. “We’re kind of at diminishing returns.” 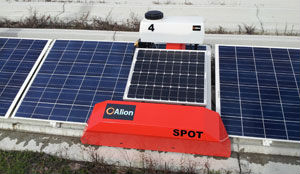 Using robotics can cut 15 cents per watt from the installation cost, compared to 5 of 6 cents per watt from higher cell efficiency, Kingsley estimates. Automated cleaning not only lowers cleaning costs, but it also leads to more predictable solar output from large solar farms, he says. So far, the company is testing its systems in California, Saudi Arabia and western China.

In the second quarter of next year, the company intends to introduce a robot that works two and half times faster than its current Rover and work with larger panels.

Another startup, QBotix, has developed a robotic device that tilts solar panels mounted on racks, replacing on-rack motors that turn panels towards to sun at large installations. Its robot, roughly the shape of a rugby ball, travels along a metal track attached to the panels’ mounting systems.

One of the most compelling features of robotics is that they can be improved to work faster and more productively, much the way automation helps wring costs from manufacturing panels. For Werner, increased use of robotics in solar is inevitable.

“It will happen,” he says. “We’ll look back on the way we install panels a couple years from now and it will look primitive. There’s a lot that can be done.”

Top image of a Greenbotics solar robot via SunPower