With Comfy app for buildings, creature comforts save energy

With Comfy app for buildings, creature comforts save energy

When most people think of office buildings, comfort doesn’t normally come to mind.

Commercial buildings that have building management systems are generally focused on mechanical and energy optimization. Systems have predetermined schedules and temperature settings independent of the behaviors and preferences of those who occupy each space. Even the most efficient commercial office buildings are typically energy data-centric because that is how their systems are designed.

“People aren’t nearly that simple,” he said. “We arrive at different times in the day, we have different preferences based on what we’re wearing, based on the season, based on whether we’re sitting by the windows, whether we’re in a private office or in a shared area -- and all of these different factors which really aren’t being considered but have a big impact on energy. So we’re in the worst of both worlds.”

According to Krioukov, research from the University of California at Berkeley’s Center for the Built Environment shows that less than 40 percent of office workers are satisfied with their comfort in workplace. “And at the same time, we have a huge energy spend and energy waste in office buildings. So if the building were more attuned to the people, then you could eliminate the discomfort and save a huge amount of energy.” 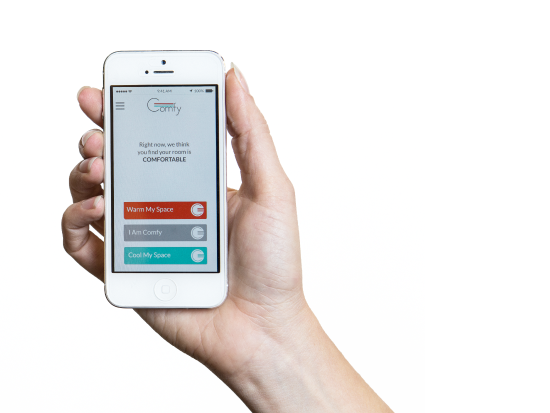 Building Robotics’ initial product, Comfy, is “the first to meaningfully reconnect people to the heating and cooling in their work environments, providing more comfortable spaces while saving energy,” as its press release explains. The software offers a web app and is mean to be compatible with existing building management systems. The goal is to provide “instant warm or cool air to people, while incorporating their usage patterns and feedback into a machine-learning algorithm that reduces energy.”

“The No. 1 complaint of office workers is being too hot or cold,” said Krioukov. “Comfy gives you the ability to tailor temperature to your needs.” And this is all supposed to yield energy savings for buildings.

Nat Goldhaber, managing director of CCV, is an investor in Building Robotics.”Instead of just focusing on how to make the equipment run better, these guys are asking a more fundamental question: What is heating and cooling really for?” he said. “It’s 100 percent to make people comfortable, so let’s create a system that allows buildings to meet that need without all of the typical energy waste and discomfort.”

Comfy has gained traction in the commercial real estate market with pilot deployments at large Bay Area technology companies, as well as in a large federal building, through the General Services Administration’s Green Proving Ground program. The GSA is the nation’s largest landlord and manages 300 million square feet of office space for the federal government. Comfy was selected as one of two innovations for the 2013 program from over 100 applicants.

While Krioukov said that Comfy results in energy, time and cost savings for building owners and facilities managers, results are not yet available for these private pilot projects, as a national laboratory is providing outside evaluations.

Shifting how we interact with buildings

Comfy builds upon an open-source platform developed by co-founders Krioukov and Stephen Dawson-Haggerty during their time as computer science doctoral researchers at the U.C. Berkeley’s LoCal Group. They developed a software architecture meant to scale rapidly across a large, existing building stock.

“Big office buildings have a ton of existing sensors and controls within them,” Krioukov said. “Just by using software, you can maximize their full potential.” After all, people are a key factor in driving energy savings, he explained.

“We’ve been waiting for something like this for a while,” said Peter Rumsey, senior fellow at the Rocky Mountain Institute and an investor in Building Robotics. “It has the potential to radically shift how people interact with buildings in their daily lives,”