Indonesia has the world's third-largest rainforest, which is a haven for biodiversity and an economic lifeline for many rural communities. However, Indonesian forests are in rapid decline and the country regularly tops deforestation hotspots lists.

The key to protecting Indonesia's forests remains reforming its massive forestry and agriculture sectors. By giving these industries the tools to produce commodities sustainably, such as palm oil and wood pulp, Indonesia can increase agricultural production without contributing to deforestation.

One of the most promising developments on this front is the use of degraded land for new palm oil and other agricultural plantations. This practice involves siting plantations on already-deforested or degraded land, as opposed to clearing valuable forest. Producers, however, face a complex web of regulations if they wish to shift their operations from forested to degraded land.

WRI has produced a new issue brief to address this challenge, "How to Change Legal Land Use Classifications to Support More Sustainable Palm Oil in Indonesia." This publication provides a "how-to guide" for companies to shift their palm oil operations from forested to degraded land, as well as recommendations on how Indonesian policymakers can make this process easier.

Indonesia's land classification system presents serious challenges for companies, project developers and communities seeking to avoid forest loss and social conflicts. As of 2011, approximately 70 percent of Indonesia's total land area was classified as "Forest Estate" (Kawasan Hutan) by the Ministry of Forestry. Forest Estate land may be legally designated for many uses, including biodiversity conservation, community benefit, selective logging or even non-forest uses, such as plantations. The remaining 30 percent of the country's land is classified as non-Forest Estate land (Areal Penggunaan Lain) and may be developed for agriculture, urban settlement or other purposes.

However, many of these classifications do not reflect the reality of land cover on the ground. For example, many Forest Estate lands are settled or degraded, while many non-Forest Estate lands host rich primary forests. As a result, much of the land that is legally available for palm oil and other development is unsuitable due to the presence of high-conservation value forests, peat or conflict with communities. And unfortunately, much of the already-degraded, low-carbon land that would be suitable for sustainable palm oil is legally off-limits to development.

Further complicating matters are issues of governance and jurisdiction. Decisions governing the use of Forest Estate land -- even areas long since cleared of forest -- are under the authority of the Ministry of Forestry. Other Ministries and agencies that could contribute to improved management of degraded lands -- such as the Ministry of Agriculture, Ministry of Environment and local governments -- have no authority over these areas when they lie within the Forest Estate.

Lots of degraded land is suitable for palm oil development

The four provinces in Indonesia's Kalimantan region alone have an abundance of degraded land suitable for palm oil development -- about 14.6 million hectares, an area larger than Greece. However, 5.3 million of these hectares are in the Forest Estate, and therefore legally unavailable for agricultural development (see Table 1). 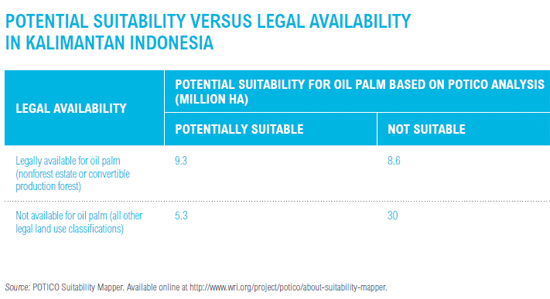 Conversely, 8.6 million hectares (nearly half) of the land that is legally available for palm oil is not suitable in terms of environmental and biophysical considerations. Despite these difficulties, it is possible for palm oil companies to transition their new projects from forested to degraded lands. Companies that want to produce more sustainable palm oil can change legal land use classifications for their permit areas in order to develop on degraded land -- a process sometimes informally known as a "land swap."

The need for legal reform

But while it's legally possible for companies to "swap" their land and become more sustainable producers, it is far from easy.

In addition to a review of the legal challenges, WRI attempted to carry out a land swap through a pilot project with the Indonesian NGO Sekala and P.T. Smart, one of the largest, publicly listed palm oil companies. P.T. Smart, which has committed to following Roundtable on Sustainable Palm Oil (RSPO) guidance for sustainable palm oil, held a license for forested peatland in West Kalimantan Province that was classified as non-Forest Estate. The company was willing to seek an alternative site on degraded land.

In 2009, WRI and Sekala identified a nearby area of potentially suitable degraded land, with strong interest in palm oil development from local communities. WRI, Sekala and P.T. Smart attempted to facilitate reclassification of these areas through Indonesia's spatial plan revision process. However, following two years of costly effort, the plan was rejected by the national government and has stalled due to the complexity and cost of the legal process.

As this example shows, companies face significant hurdles when trying to swap land, due to the length, cost and legal complexity of the process. But Indonesia's policymakers can take action to make land swaps easier and usher in more sustainable palm oil development.

These two ministries, responsible for the country's spatial planning process, should collaborate on producing authoritative and consistent maps, documenting and reducing the steps needed to approve spatial plans, as well as cooperating with other ministries and local agencies to make data on land cover and use widely available.

Our guiding principles for this reform:

• The Ministry of Forestry should issue a clear regulation for conducting land swaps.

Land swaps already are conducted informally as part of Indonesia's country-wide spatial planning process every five years. But there is no clear legal guidance for these swaps, and efforts to conduct a land swap for environmental or social goals are often held back. The Ministry of Forestry, in cooperation with the Ministry of Public Works and local governments, should issue specific a specific regulation to legally enable these land swaps. This regulation should include a precise definition for the term "land swap," lay out clear guidance for parties attempting a swap, and reduce unnecessary steps to add and subtract areas under Ministry of Forestry-controlled Forest Estate.

• The Ministry of Forestry and Ministry of Public Works should ensure that the legal classification of land fits reality on the ground.

The ministries should work with Indonesian district heads (Bupatis) and governors to match spatial plans to actual biophysical and social conditions. This could take place through an audit of existing legal classifications at the district level, as well as a requirement that all reclassification procedures should account for biophysical and social considerations. For example, Forest Estate, or areas listed as forested according to Indonesian law, should contain only areas with significant tree cover. In turn, areas with low tree cover that have been cleared long ago should not be in the "Forest Estate."

• Decision-making should be based on a single, authoritative and consistent set of maps.

Local and national ministries should support initiatives such as the Indonesian President's OneMap to ensure that both national and local level plans are incorporated into a single, publicly accessible map and database. Each Ministry produces its own maps, but they have not been harmonized with each other or with maps at various jurisdictional levels. For example, the Geospatial Information Agency as well as Ministries of Forestry and Agriculture should provide their data on biophysical features (such as land cover) and legal factors (such as classifications, permits and local claims) to the spatial planning process. Local governments, which hold important data on concessions and land use, should also share data.

What we can do about the palm oil problem