Cities, startups tap the wisdom of crowds for sustainability

Cities, startups tap the wisdom of crowds for sustainability

What role can the proverbial crowd, or collections of ordinary citizens, play in solving daunting long-term problems related to climate change? The answer, according to some panelists at an MIT-organized conference, is quite a bit.

New York City has enacted many policies to reduce greenhouse gas emissions, make the city’s infrastructure resilient and improve the quality of life for residents. But it’s not all about top-down planning, said Sergej Mahnovski, director of New York City’s Office of Long Term Planning and Sustainability. He spoke last week during the Climate CoLab conference at the Massachusetts Institute of Technology. And city planners are also devising ways to use citizen-generated data to inform policies.

In the aftermath of Hurricane Sandy, city officials used an app called Gasbuddy, which locates cheap gas station prices based in part on user-submitted data, to locate functioning gas stations. That, along with interviews with gas station owners, provided city officials with a more accurate assessment than the one provided by federal agencies, Mahnovski said. Similarly, the city gathered data from utilities and residents on which neighborhoods were affected by lost power and gas service after Sandy.

“The situational awareness component was incredibly important to understand which communities were impacted so that we could mobilize a fleet of plumbers and electricians,” he said.

The city also has had success in gathering data from buildings and sensors at the local level to set city-wide policies. Using a network of air quality sensors, the city located which neighborhoods had the worst air problems and found its primary cause -- concentrations of boilers running on heavy fuel oil. New York also will require commercial building owners to report energy consumption information so people can compare building efficiency.

In a new initiative, New York is now working with Philadelphia and Boston to use a map-based social media tool to gather citizens’ input on where to site plug-in vehicle charging stations. “We’ve only scratched the surface of the abilities of distributed systems and crowdsourcing. It’s not just an issue for us in New York but globally as well,” Mahnovski said.

There is ample evidence that these sorts of crowdsourcing and distributed data collection techniques work in a variety of situations, said Karim Lakhani, a professor at the Harvard Business School and speaker at the conference. He worked with NASA, for instance, on a design contest to optimize the position of the solar panels on the International Space Station, which gave NASA insight into potentially better configurations. 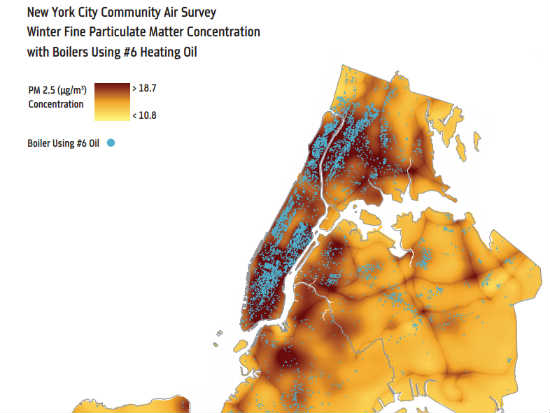 In the contexts of cities and sustainability, cities could set up programs where citizens themselves provide monitoring of air quality or heat island effects with low-cost hardware. Cities also should create an infrastructure to solicit feedback on what problems should be addressed, Lakhani said. “The input from cities can help guide your investment strategies,” he said. In the future, cities could collect new sources data, whether it’s noise levels or gas leaks, perhaps even from smartphones.

Companies are also using crowdsourcing into their business models. Large corporations, including General Electric and IBM, have weeks-long innovation jams where they generate ideas to solve problems, which is an effective way to cross organizational barriers and generate fresh perspectives, said Peter Evans, the former director of global strategy and analytics at GE, at the conference.

Green-minded startups, too, are effectively using the passion of their customers to further their business goals, said Nancy Pfund, founder and managing partner of DBL Investor. A clear example is Solar Mosaic, a company that raises money from individuals to invest into small rooftop solar projects, which allows people to invest in clean energy and earn a return. Using social media, young companies are also quickly gathering feedback on new products. Pfund said a company making compostable paper jugs, for instance, takes it product design cues from early customers.

“In clean tech, you’re not just buying or leasing a panel or putting an electric vehicle in the garage," she said. "You are making a statement about what you want to world to look like for yourself, your children and your grandchildren. It’s an immensely powerful mobilization tool."

Right now, many crowdsourcing efforts in business are experiments. To become a standard way of operating will require institutions to change, Lakhani said. “We see crowds routinely outperforming internal solutions,” he said. “The challenge is how do we change our processes so we can tap the crowd routinely and have the expertise routinely to ask questions and assess their answers.”

The powerful promise of open data and the network effect

What impact investor Nancy Pfund is thinking about

VERGE Day 2: The city as startup, platform and organism