IKEA charges up its sustainability plan

IKEA charges up its sustainability plan

IKEA has sought to further burnish its reputation as one of the UK's greenest retailers, announcing all of its stores will have installed electric car charge points for customers by the end of the year.

The company announced Tuesday that it was teaming up with auto giant Nissan and green energy provider Ecotricity to install fast charge points in the car parks of all 18 of its UK stores.

The Nissan-developed charge points promise to deliver 80 percent of charge to an electric car within 30 minutes, while green electricity will be provided free of charge by Ecotricity.

The companies said the rollout would be completed by the end of next month, making IKEA the first major retail chain to offer charge points at all of its stores.

"At IKEA, we believe electric vehicles have a significant part to play in a more sustainable future," said Joanna Yarrow, head of sustainability for IKEA UK and Ireland, in a statement. "We know that our customers want to live more sustainably and that extends to how they get to and from our stores. By installing more charging points and strengthening the infrastructure nationally, we believe we can start to tackle one of the major barriers to using electric cars, which is the fear of not finding a convenient place to charge the car." 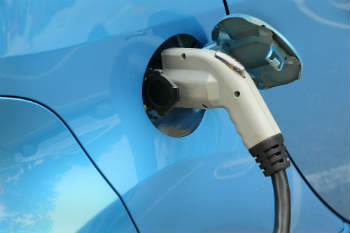 Customer demand for EV amps up

A spokeswoman for IKEA confirmed that each store would have at least one charge point by the end of December, adding that the company was confident it would help to meet growing demand from customers.

"While it is difficult to put an exact figure on [the number of customers who will use the charge points], we know that the EV market growing and that there is a growing demand for rapid charging infrastructure," she said in an emailed statement. "So far in 2013, more than 1,500 LEAFs have been sold, three times as many units compared with last year. Research released by POD point, one of the UK's charging infrastructure providers, revealed in 2011 that IKEA Wembley was the most popular place for charging an electric car in the whole of the Source London Network, and we hope that with the introduction of the new rapid charging points, we can make it even more convenient for customers to charge their cars."

The company also revealed that it is currently trialing a number of Nissan's 100 percent electric LEAFs as it explores how to expand its existing fleet of hybrid vehicles through the addition of zero-emission vehicles.

The announcement is the latest in a long line of clean technology commitments from IKEA following confirmation last year that it will invest €1.5 billion (about $2.01 billion) over the next two years as part of its strategy of sourcing all of its energy from renewable sources.

In related news, UK sales of electric cars reached nearly 1,150 in the third quarter of this year, up by 25 percent from the previous quarter.

New registrations for the government's £5,000 (or about $7,963) plug-in-car grant scheme hit 1,149, the highest figure of any quarter since the scheme began in 2011, suggesting the market for EVs is gaining ground.