SAO PAULO -- To be sustainable, a company should make products that are efficient, smart and long lasting. To many companies, turning the last item into reality is the toughest of all -- but that’s what GE and Whirlpool aim to do.

“We are analyzing the data and it has transformed the way we look at equipment,” said Kenneth Herd, general manager of GE's Brazil Technologies center. “What we do is no longer equipment based, it’s services oriented. It's performance-oriented services.”

At the GreenBiz VERGE São Paulo conference last week, Herd described how GE is increasingly signing performance-based contracts through which clients seek cost savings and pollution reductions. And, according to Herd, this is possible due to Industrial Internet technologies -- sensors and monitoring systems linked to communications systems allow the collection of thousands of data points. This can help to lower operational costs, materials usage and emissions.

“We are going to see significant savings to the environment,” Herd said.

Selling equipment, in this case, becomes less relevant when it comes to specialized machinery, such as jet turbines and medical equipment that can be fitted with sensors, he said. And micromanaging the operations of natural gas-fired power generation equipment in large U.S. power plants alone, for example, could reduce fuel consumption by 1 percent -- a savings of $66 billion over 15 years.

“This will allow equipment to be more predictive.” Herd said, pointing out that performance-based contracts are already being signed with local Brazilian airline Gol. 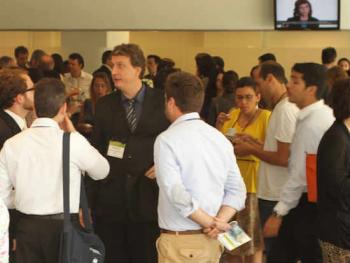 “In 2012, we launched 140 new models, and now in Brazil 90 percent of our products are class A in the energy savings scale," said Vandereley Niehues, the group's sustainability manager, during a VERGE talk. Explaining the Design for the Environment principles Whirlpool has adopted in the last three years, he added, “We need to walk the talk."

Niehues explained that the executive bonuses at Whirlpool are measured according to strategic pillars, which include efficiency in water, energy and waste; reduction in toxic substances and CO2 emissions; and enhanced social development.

One of the new products launched in 2012 is a refrigerator that consumes 30 percent less energy due to new intelligent compressors. But this product, admitted Niehues, is one of the 14 new products -- 10 percent of the total launched -- that were considered 'green,' he said, adding that design for the environment is an ongoing program that started in 2010.

“This means finding a way to be green and make money at the same time”, he explained during a conversation on the sidelines of the VERGE event. “We have already zeroed industrial waste after finding a destination for the polyurethane [foam insulation] used in refrigerators. We currently pay for its removal by a company that transforms it into paneling and garden furniture, among other things.”

One of the innovations launched in 2010 in Brazil inclued a new business model for a drinking water filter for businesses that is rented out rather than sold.

“We decided not to sell this new product and it is a success," he said. "We are growing 25 percent a year. We rent out the equipment and the client pays for the maintenance and its substitution. What's important here is the quality of water.”

Niehues said that this new business model is being studied by several research groups within the company, although he sees resistance.

“Not everyone sees an advantage in not owning the equipment,” he said. “Ownership is strong cultural trait.”

Image inside a washing machine by Oleksii Sagitov via Shutterstock

10 trends that drove sustainable transport in 2013