Why cities hold the key to the success of EVs

Why cities hold the key to the success of EVs

Last month, governors from eight states -- California, Maryland, Massachusetts, Connecticut, New York, Oregon, Rhode Island and Vermont -- signed a pledge to increase the use of electric vehicles (EVs), with a goal to add 3.3 million EVs to the roads by 2025.

It was the latest high-profile initiative aimed at supporting EV infrastructure, which has a proven impact on advancing green efficiencies. A recent study by the National Academy of Science, for instance, predicts that by 2050, EVs, hybrids and gas-free cars will lead to an 80 percent reduction in greenhouse gas (GHG) emissions in the United States.

At Schneider Electric, where I am the director of EVs, we see EV-infrastructure adoption occurring in three phases: EV Ready, EV Willing and EV Able. Right now we're still in the EV Ready stage: It's all about putting the charging infrastructure in place before mass adoption occurs. We think cities in particular have an opportunity to significantly advance EV adoption -- and, in turn, EVs can play a key role in developing smart cities.

Building the case for urban sustainability

Urban environments today represent both our biggest opportunity and greatest challenge when it comes to energy efficiency. Cities consume 75 percent of global energy and give off 80 percent of GHG emissions. With the number of urban dwellers on the rise -- projections predict that 70 percent of the world's population will live in cities by 2050 -- it is necessary to plan and put infrastructure in place now to make cities greener.

EVs can help achieve urban sustainability in ways that extend beyond just reducing GHG emissions. For example, EV charging infrastructure can be tied into the power grid, enhancing electric grid stability during peak demand situations. A recent program at the University of Delaware proved for the first time that EVs can even give and take power from the electric grid on demand, and get paid for that service. And the Department of Defense recently announced that it plans to invest $20 million on a fleet of EVs that will have the ability to export their own power and offset their costs using vehicle-to-grid technology. 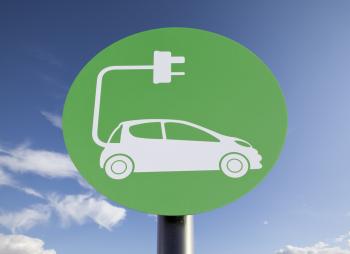 Public charging stations outside of workplaces also have the power to enhance urban sustainability. Already, there's growing interest from hotels, hospitals, universities and retail locations in adopting EV chargers to meet sustainability goals. At Schneider Electric, for example, we recently partnered with Caesars Entertainment to install EV charging stations at three resorts: Harrah's Reno, Harrah's Lake Tahoe and Harvey's Lake Tahoe. The initiative is part of Caesars' CodeGreen program designed to reduce water, energy and waste consumption at its resorts, many of which are in or near major urban areas.

The role of stakeholder collaboration

In order to gain traction, EV infrastructure must be backed by policy encouragement and economic incentives. A city's successful rollout of EV infrastructure is contingent upon strong partnerships between city government, citizens, local stakeholders and the business sector.

Taking a holistic view of the value afforded by a smart and highly responsive EV charging infrastructure will allow cities to unlock new revenue streams. The upfront costs associated with the infrastructure should be appropriately rationalized against the immediate value offered to city stakeholders. The sustained long-term value of this infrastructure is compelling, especially considering EV adoption growth and shifting economies of scale.

One example of progress is New York Governor Andrew Cuomo's announced $19 million New York Truck Voucher Incentive Program, an effort to encourage the purchase of battery-electric commercial trucks and other energy-efficient vehicles. The program shows how real action can support not only the public sector, but create opportunity for the private sector, which benefits from a jumpstart in manufacturing and a lower cost of entry for EVs and charging infrastructure.

In many ways, the world's sustainability challenge will be won, or lost, in cities. By focusing on EV infrastructure growth, there's a better chance that the battle will be won. The tools are in place to drive significant change -- so what are we waiting for?

Photo of the New York City skyline by dibrova via Shutterstock