The fight for sustainability in agriculture and food production is one of the great fronts in the battle for a sustainable future. It's easy to see corporate control, reliance on fossil fuels and the grand industrial scale of the food system in the United States and wonder whether food sustainability ever will be possible. We seem to have largely forgotten activities that were once cultural mainstays, such as eating with the seasons, cooking from scratch and enjoying a family dinner.

For a long time, the sustainable food and agriculture movement has progressed in a slow and (pardon the pun) organic fashion: Farmers' markets sprout up here and there, a community plants a garden, or books and documentaries draw attention to yet another nuance of sustainable food production. Yet conventional industrial agriculture still sells the lion's share of the world's food.

The small-scale, localized, decentralized nature of the food movement at first seems a weak point: Can it ever compete with the industrial-agricultural machine? But it may in fact be the movement's great strength, as it mirrors the locality and sense of place that are the cornerstones of a sustainable food system.

Amid this national backdrop of increasing concern about food, one particular movement has made almost incredible progress in the space of only a few years: the push to bring sustainable food to college campuses and dining halls.

The initiative began en masse about three years ago, with a national grassroots activist group called the Real Food Challenge. The group developed a document called the Real Food Campus Commitment, presented to university presidents who are urged to sign on and promise that their schools will purchase at least 20 percent "real" (or sustainable) food by 2020.

Three years ago, there were no signatures. Today, there are more than 17, and many more joined a few weeks ago on Food Day, a national campaign organized by the Center for Science in the Public Interest and endorsed by Real Food Challenge. The day has become symbolic for students, as many chose to have their signings of the Campus Commitment coincide with Food Day.

Until early 2012, even multiple signings of the Commitment were not certain to have any real effect. College foodservice companies often obstructed implementation of the Commitment by refusing to provide purchasing invoices to calculate the types of food being purchased. 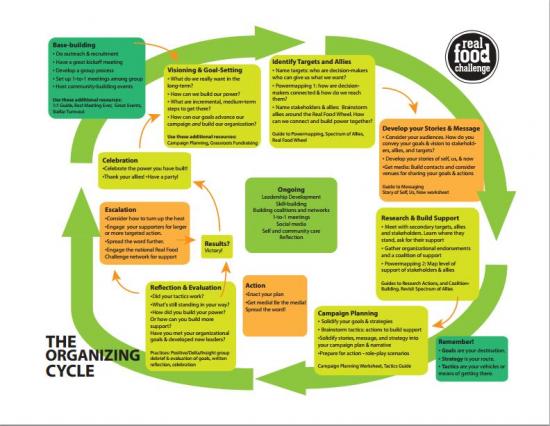 In the last year and a half, that has changed. Aramark, the third largest college food provider in the United States, rescinded an internal memo preventing dining managers from cooperating with students working with Real Food Challenge. Sodexo, the second largest provider, signed a national agreement with Real Food Challenge to make all purchasing invoices available to students calculating the sustainability of the dining service.

Real Food Challenge is currently negotiating for the same agreement from Chartwell's, a subsidiary of the largest college food provider in the nation. Together, Aramark, Sodexo and Chartwell's parent company, Compass Group, provide the vast majority of college foodservice in the U.S.

The bottom line is that students, working with health and environmental activists but without significant political or financial resources, have had a major impact on the business practices of some of the largest food corporations in the nation. This is important not merely because it demonstrates the power of grassroots activism, but because it indicates a changing standard of competition in the college foodservice industry.

What's next in the fight

Within a few years, no company will be able to ignore sustainability or rebuff students' requests for transparency. In fact, we're already seeing this: Aramark, the most troublesome of the "big three" providers, recently lost its chance to administer two large contracts at Brandeis University and Johns Hopkins University because of student activism.

The question now is whether these unprecedented successes will snowball and lead to a rapid transformation of the food system, or whether the foodservice corporations will balk at making more than minor changes to their large-scale industrial business models.

It's not yet possible to answer this definitely, but a few points suggest that the first scenario very well may be possible. It is clear that foodservice companies increasingly will be unable to ignore the demands of students to bring sustainable food to their campuses. This in turn might have a cascading effect on their broader business models and even the entire food economy, as sustainable food suppliers and manufacturers gain market share and recognition.

And because food is such a powerful -- and indeed universal -- part of life (everyone eats, after all), there is a good chance that the food movement will only grow stronger, helping to drive the momentum of the transition to a sustainable society one company, one campus and one market at a time.

How quickly we can achieve food sustainability, and what exactly a sustainable food system will look like, are still open questions. But even now, the building blocks are in place for the transformation of our food system.

This article originally appeared on the Worldwatch Institute website.