Some of the most promising energy storage startup companies are targeting big energy users and renewable energy project developers rather than utilities -- at least for now.

Case in point: Silicon Valley-based company Stem on Monday announced that it’s raised an additional $15 million from GE Ventures and the venture capital arm of the Spanish renewable energy company Iberdola. In October, Stem announced that it signed a deal with Clean Fleet Investors, which will provide project finance to install Stem batteries in about 150 commercial buildings with no money upfront.

The company’s “smart" off-the-shelf lithium ion batteries are packaged into refrigerator-size units of 18 kilowatts, and can be lashed together to make larger batteries. The battery includes an on-board computer that analyzes a building’s energy usage trends, and is connected to cloud data analytics that optimize when to pull power from the grid and when to draw on the battery. 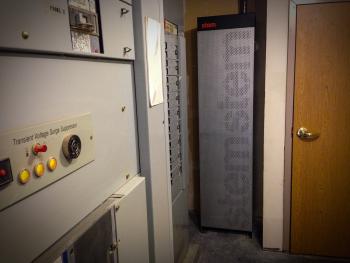 The battery supplies power during hours when power is most expensive, allowing companies to reduce the “demand charges” they pay for peak-time usage. InterContinental Hotels, for example, recently had success with the technology at its Mark Hopkins hotel in San Francisco, and now plans to install the batteries at 16 other hotels in California.

Stem’s business model reflects what many battery companies also have concluded: Utilities are slow to move and very conservative in adopting new technology. Also, regulations for utilities historically have been geared toward investing in power lines or power plants, rather than energy storage. A database of energy storage projects maintained by the Department of Energy shows that the number of projects owned by non-utilities, such as businesses, military bases or power plant operators, is more than double that of utilities.

Stem is primarily targeting businesses that can reduce their high-demand charges with a battery placed behind the electricity meter. But the batteries can be used for a number of other niche applications. For example, startup Ambri last month said its first customer is a military base in Cape Cod, which will use its liquid metal battery to store wind and solar power for its microgrid.

Flow battery company Imergy Power Systems, meanwhile, recently said that it intends to sell its batteries to back-up telecom towers and microgrids in developing countries, and to provide backup power to data centers. Once its technology has been demonstrated in those applications, Imergy plans to target companies that develop large solar and wind projects, said Tim Hennessy, the company’s executive vice president of sales and marketing. 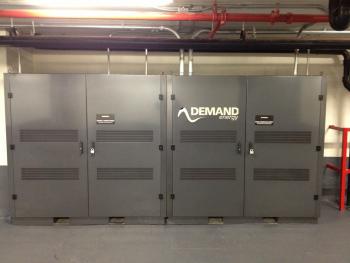 Utilities, of course, are also active in grid storage. A number of utilities have installed giant batteries to ease power bottlenecks at substations or provide quick bursts of power to maintain a steady frequency on the grid. And California recently enacted an energy storage mandate for utilities that's expected to create new demand for batteries and other energy storage products.

Benefits for the grid

As more distributed storage systems are installed, it could help stabilize the grid at large. Stem’s batteries in buildings, for example, can be aggregated to provide capacity and stabilize the grid. “Stem’s energy service platform is a significant technology in the rising energy storage market, particularly as its software readies the grid to absorb the increasing generation of renewable energies,” Colleen Calhoun, senior executive director of GE Ventures-Energy, said in a statement.

Many people consider energy storage crucial to making the grid more reliable and help increase the penetration of solar and wind. As with all disruptive technologies, there needs to be early adopters willing to try a new way of doing things. In the case of energy storage, those adopters just as likely could be energy users as energy providers.

10 questions to ask before you build a microgrid