How e-bikes proved their pedal power and went mainstream

How e-bikes proved their pedal power and went mainstream

In developed countries, the automobile often represents the most desirable attributes of effective transportation: flexible, fast and effortless. But is it the right choice for increasingly dense urban environments?

Automobiles for personal transportation are a Pandora's box -- countries that once encouraged them now find it impossible to curtail their use, even as gridlock paralyzes city streets and vast energy resources are used to inefficiently move citizens. Moving a person in a car requires moving 3,000 pounds of metal. But there's potentially a better way: electric bicycles.

The benefits of e-bikes

Electric bikes (or "e-bikes") provide an alternative to cars for flexible urban transportation, and municipal governments should encourage their use in cities through infrastructure and policy. Compared to the weight of an average auto, moving an electric bike requires moving only 50 pounds (plus the rider, of course). Almost all the bike's energy is going toward transporting the person.

E-bikes have a battery and electric-assist motor that lets them cruise with minimal effort at 20 mph for up to 30 miles before recharging. They can be charged quickly with home plugs. The bikes let users skip around dense auto traffic, cost a few hundred (China) to a thousand (U.S.) dollars, and can run on less than a cent of electricity per mile. Even if the bike's approximately 300 watt-hour battery was charged using coal electricity (not ideal, but a worst-case scenario), it would take 81 bikes to emit the same amount of pollution as one car traveling the same distance. And the pollution from e-bikes generally would be released at power plants outside the city -- not within breathing distance of citizens.

E-bikes cannot replace cars entirely -- they cannot easily haul cargo or multiple passengers, are vulnerable to inclement weather and lack the long ranges and high speeds of automobiles (although this is less an issue for average city driving).

Yet e-bikes can reduce auto use and have proven popular even in countries where automobiles are relatively ubiquitous and affordable. In Europe, for example, e-bike sales have been rising at 20 percent per year, because consumers see them as inexpensive alternatives to cars, buses and subways for urban transit. 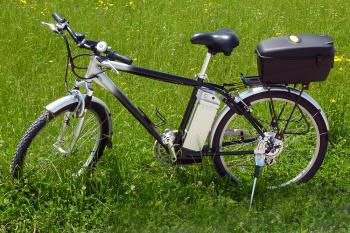 Plus, e-bikes decrease the effort to use bikes and make them more appealing for the general populace. This makes them appropriate even for those who are elderly, out of shape or otherwise not capable (or willing) to put forth physical effort for transportation.

E-bikes increasingly are becoming a symbol of the most developed areas, rather than the least. They are becoming synonymous with areas where citizens are conscious of fuel costs, parking and traffic difficulties, and the environment.

E-bikes are on their way toward leapfrogging past cars as the superior method of urban transit, at least in some places. But barriers continue to exist.

E-bikes are most numerous in China, where 130 million are on the road and 32 million were sold last year. Their low upfront price, flexibility and low operating cost have made them staggeringly popular. The market had been growing at a stunning pace (over 30 percent per year), but several cities in China recently banned the bikes. Why?

Culturally, the bike represented pre-industrialized transportation and was crowding out the cars that would symbolize China's status as an economic superpower. Chinese government entities are generally interested in promoting "modern" technologies in cities as signs of progress. As such, there has been a major push to expand auto use and ownership in China -- large-scale car use is the symbol of a fully developed country.

Practically, the bikes were causing accidents while zipping at high speeds through traffic and over sidewalks. The bikes were jam-packing roads and making traffic conditions even worse for passenger and freight vehicles. Transportation infrastructure traditionally has been designed around cars, and Chinese cities did not want to support a technology that could render their roads unusable to autos. 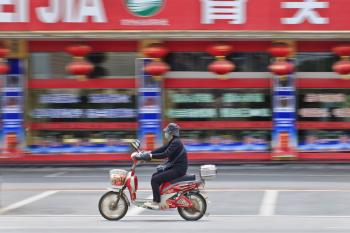 Although city governments were correct in trying to slow market growth of a technology using road and regulatory infrastructure not designed for it, unequivocally eliminating the use of e-bikes misses an opportunity for energy-efficient urban transit.

Fortunately, that tide is shifting. Major urban centers in developed countries are doing everything possible to get citizens out of cars and onto alternative transportation systems, such as bikes, subways and buses. And in China in particular, well-publicized urban air pollution challenges are prompting leaders to enact limits for new car licenses issued each month, forced vehicle retirements and other strategies.

Dealing with the issue of e-bikes (as well as regular bikes) on existing roads is difficult. Cars and bikes travel at dissimilar speeds, don't maneuver and accelerate in the same way and are vastly different sizes. Expecting them to share the same space leads to crowding and safety issues for both vehicles.

Ideally, bikes could possess their own infrastructure, much as pedestrians use sidewalks rather than trying to share the road with cars. As cities look at expanding lanes on roads, building highways through cities or employing other methods to control auto traffic, they instead should donate the space toward dedicated bike transportation lanes, as some already have done. Boulder, Colo., for example -- home to one of Rocky Mountain Institute's offices -- boasts 159 centerline miles of on-street bike lanes and multiuse paths and underpasses.

In Europe, the Danish cities of Copenhagen and Odense have emerged as paragons of the advantages of investing in bike infrastructure. When the use of conventional bikes began to expand rapidly during oil-price jumps, these cities began an aggressive campaign to establish and promote bike infrastructure. Bikes were removed from the roads by creating dedicated cycling lanes. In recent years, the growth of e-bikes has been referred to as an economic savior, rapidly expanding biking's popularity and leading to $170 million in economic activity within the city. As the popularity and number of dedicated bike routes within Copenhagen has continued to grow (40 km of paths were built recently), 40 percent of commuting is now done by bike. By further expanding infrastructure, with an emphasis now on widening bike lanes, the city has a goal of 50 percent of commuters using bikes by 2025. 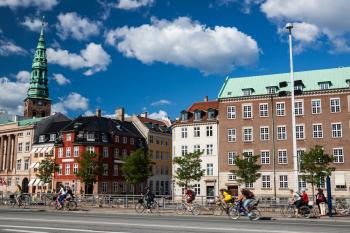 Cities including New York City, which recently mimicked Chinese cities in banning e-bikes, could learn from this that bans are not the most effective way to separate cars and bikes.

As e-bikes move off auto roads and onto dedicated transportation routes -- whether on-road lanes or bike-specific paths -- it will reduce many safety concerns. If e-bike safety incidents continue, it may be necessary to treat them as motor vehicles and require users to be licensed and trained for safety and appropriate behavior, as is expected of automobile and motorcycle drivers.

In Southeast Asia, gas-powered tricycles are popular for local transportation. But within the past year, a potentially paradigm-shifting move has been afoot, according to Danny Kermode, senior policy advisor for the Washington Utilities and Transportation Commission and an RMI alum. He points to a $300 million Asian Development Bank loan -- supported by $99 million from the Philippines -- to develop an electric tricycle to replace the aging, dirty gas-powered ones.

The project initially hopes to put 100,000 clean, energy-efficient e-trikes on the road in the Philippines, with new e-trike owners financing their vehicles under a subsidized lease-to-own arrangement. Eventually, ADB hopes e-trikes will replace 3.5 million gas-powered motorcycles and tricycles currently on the road. 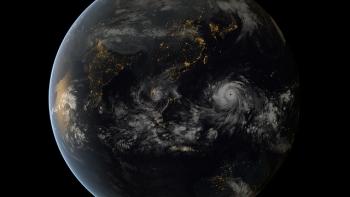 Meanwhile, Meralco, Manila's energy provider, is developing EV charging station technology with an eye toward the e-trikes, whose lithium ion batteries can charge to 50 percent capacity in less than 30 minutes. In addition, five solar charging stations will be able to charge e-trikes without drawing any power from the grid, notes Kermode.

As the Philippines reels from the devastating aftermath of Typhoon Haiyan, possibly the most powerful storm in the recorded history of Earth, it is a tragically potent reminder of the importance of getting our transportation system off fossil fuels to combat climate change. From the Guardian to ABC, there's been no shortage of stories about the link between the severity of storms such as Haiyan and the influence of global warming.

But arguably, the most poignant story came from the UN climate talks that recently took place in Warsaw, Poland. Earning a standing ovation, Filipino diplomat Naderev Sano -- head of the Philippines' national climate commission -- chastised the world for its relative inaction in addressing such an urgent problem. Sano gave his impassioned speech just four days after Haiyan decimated his country, many of his relatives still unaccounted for as he fought back tears.

What's next in the e-bike movement

E-bikes won't prevent another Haiyan, but they do have the potential to get cars off the roads in urban environments -- improving air quality, reducing energy demands and reducing parking and traffic issues. Although occasionally not practical due to weather, freight or distance, they are appropriate for most everyday uses.

Shanghai, Beijing and other cities in China were correct to reduce the growth of the market until safety, traffic and other barriers could be addressed. E-bikes' rapidly growing popularity had overwhelmed a system not designed to support them. However, rather than simply banning them, urban centers should look into providing dedicated and separate transport corridors for these vehicles.

Citizens always will desire flexible transit options, and a city where every person looks to a car for primary transport is not one that should be encouraged. E-bikes are part of an overarching system where the car is rendered an infrequent choice for transportation, rather than a consistently necessary one. Only by breaking our addiction to autos, and our autos' addiction to oil, can we truly transform transportation. E-bikes can and should be part of that transformation.