'Wind for Prosperity' brings turbines to the developing world

'Wind for Prosperity' brings turbines to the developing world

To help the developing world stop relying on dirty diesel generators and switch to clean energy, wind turbine manufacturer Vestas's renewable energy arm has partnered with Abu Dhabi renewable-energy company Masdar in bringing hybrid wind to rural communities that are off the grid.

Their collaboration, "Wind for Prosperity," plans to bring wind energy to 1 million people in 100 communities over the next three years.

"This is one of the biggest corporate initiatives to combat energy poverty and deploy green technology in developing countries. It's a triple win -- generating growth, reducing pollution and doing both profitably," said Morten Albæk, group senior vice president for Vestas.

Communities will receive factory-refurbished wind turbines that are easy to transport, erect and maintain, combined with advanced diesel for backup.

Using Vestas's weather data processing capabilities, the partners are identifying parts of the world that desperately need energy and where there's lots of wind. 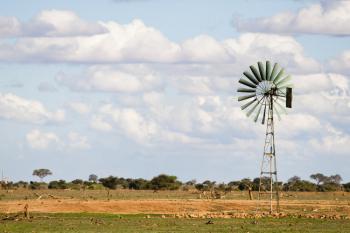 Masdar will serve as project developer and Vestas will focus on project design and sourcing, as well as refurbishing wind turbines.

About 13 communities in Kenya -- where about 200,000 people live -- will be the first project sites starting in mid-2014, in partnership with investment group Frontier Investment Management. Other countries that are on the short list: Ethiopia, Tanzania, Yemen, Pakistan, Vietnam and Nicaragua.

"We expect this to be a successful investment commercially -- adding to the bottom line in the near term and helping to open new markets to wind energy further down the line," Albæk said.

A new model for corporate giving

"There was a time when corporate executives like me would throw money at solving these problems, ignoring our business savvy, our models, our metrics, in the spirit of aid. But we arguably did more harm than good -- and we certainly haven't solved the problem of poverty. So I believe it's time for a new vision. It's time for partnerships that promote collaboration, not dependency. It's time for investment, not charity. It's time to deploy the world-class knowledge and technology we have, putting it to use for profit -- in multiple senses of that word. It's time for an initiative like Wind for Prosperity," Albæk said.

"We can help bring the many benefits of electrification -- improved health care, brighter educational prospects, easier access to water, better tools for agriculture, some new jobs, a big boost to business. We can lower the cost of electricity generation by at least 30 percent. We can take fuel trucks off the road and provide an alternative to the dirty diesel that, if even available, is often the only power-generating option. And we can make money doing it. It's a win-win-win-win scenario. Who could or would say no?"

This story originally appeared at SustainableBusiness.com. Wind turbine photo by WDG via Shutterstock.