Green consumers alive and well, but living in emerging economies

To those of us seemingly surrounded by climate burnout and indifference, it is perhaps comforting that important places in the world are experiencing their first big wave of green consumerism.

This is the picture that emerges from GlobeScan's latest 20-country consumer poll that tracks climate concerns and low-carbon behavior. Results show low-carbon consumer behavior is surging in emerging economies such as China, India, Indonesia and Mexico. Asked what, if anything, they have done over the last year to reduce climate change, increasing numbers of consumers in these countries volunteered that they had bought energy-saving light bulbs or low-energy appliances.

Meanwhile, these same behaviors have dropped away in industrialized countries such as the U.S., U.K. and Germany since 2009.

As we reported here in Proof Points earlier this year, climate concerns have been growing among citizens of emerging economies as they become wealthier and more convinced of the links between erratic weather patterns and manmade climate change. It is heartening to see consumer behavior in these countries reflecting these increased concerns.

Conversely, consumers in North America and Europe have lost their focus on carbon-reducing actions, in keeping with their declining climate concerns.

The fact that low-carbon behavior is now popular among consumers in emerging markets such as China and India is consistent with other GlobeScan research over the last two years. The surveying has identified a large and powerful new segment of the consumer markets in these countries, which we call the "aspirationals." 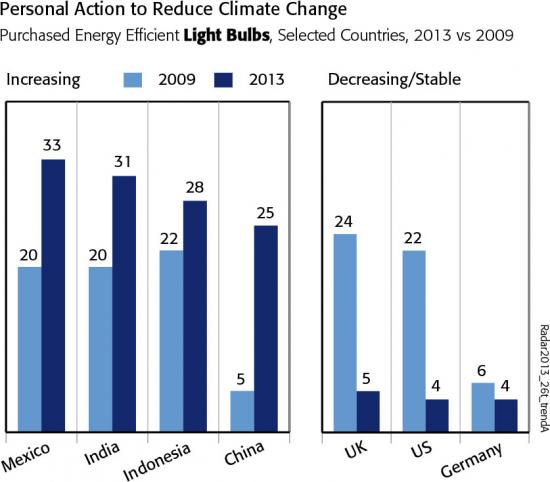 The rise of the aspirationals

These aspirationals are uniting style, social status and sustainability values to redefine consumption. They are characterized by their love of shopping, desire for responsible consumption and trust in brands that act in the best interest of society. They are empowered, young and urban shoppers. Given their numbers (about 46 percent of Chinese consumers and 42 percent of Indian consumers) and upward mobility, they are more likely than others to shape the societal norms in their countries.

All this should be heartening to climate activists, green entrepreneurs and brands with a mission. It indicates that serious amounts of yuans and rupees are being and will be spent in the right direction, even if dollars and pounds are not just now. It also confirms that behavior follows concern, which is promising given the recent resurgence of climate concern (and environmental concerns generally) in Europe and North America.

Brands and green entrepreneurs with low-carbon solutions for consumers will get earlier traction in emerging markets in the foreseeable future, so they should focus their attention there. So much so, that the American adage might be re-written to read, "Go East young man, go East (to Asia)." That is where the green market is alive and well today.

How can businesses nudge 'stuck' consumers to be greener?

Why companies must win the trust of aspirational consumers

Green Consumers and the Recession: Is It Really Different This Time?