If Libelium co-founder and CEO Alicia Asin has her way, smart systems enabled by her company's sensor networks eventually will swarm the world around us, enabling and automating more sustainable business decisions.

Her team has even dreamed up a comprehensive infographic that demonstrates the potential for disruptive applications enabled by the Internet of Things (IoT), including everything from smart parking to power plant safety to waste management.

"The most replicable examples are those directly related to saving costs," said the Spanish entrepreneur in a recent interview from San Francisco, where her team announced a series of relationships aimed at making it simpler to incorporate the data gathered from its sensors into existing business applications -- including vineyard management. 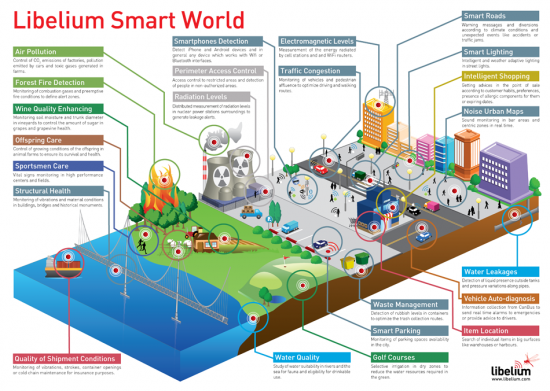 Libelium's name comes from the Latin term "libellula," which means "dragonfly" in English. "It's a swarming insect that sends very small messages to communicate, much like we are enabling," Asin said.

Bootstrapped into existence in November 2006 by Asin and David Gascon (both computer engineers by training), the company is headquartered in Zaragoza, Spain. Its flagship products are the Waspmote wireless sensor network platform and the Meshium wireless gateway. (It is in the process of setting up a U.S. subsidiary.) In mid-November, the company rolled out a series of connectors that make it simpler for developers to integrate its technology with several cloud-based platforms, including:

• Axeda Machine Cloud, which enables the creation of solutions that link IoT systems with enterprise applications

So far, Libelium is working with more than 2,000 developers from 75 countries using Waspmote and Meshlium for commercial applications in parking, traffic congestion and precision agriculture.

Asin acknowledges that the market for smart-this-or-that applications is extremely fragmented, so the company is focusing on a couple of vertical markets to start, in particular smart agriculture, and specifically vineyard management. Libelium chose this sector in part because of the European Union directive that requires agricultural operations and farmers to justify their use of certain fertilizers. Sensors can help improve environmental management insights, offering a return on investment in as few as four months, Asin said. 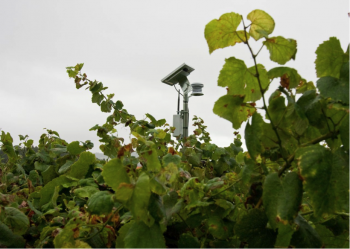 An example of what's possible comes from the Galicia Rias Baixas wine region in northwest Spain, where the government is investing in a "smart viticulture" project to improve Albarino grape yields.

As part of the initiative led by consulting company Idom, a dozen Libelium Waspmote sensors have been deployed at a vineyard in Santander, where they communicate information using three Meshlium wireless gateways.

The technology measures temperatures, ambient humidity, soil moisture and leaf wetness in real time. This information can be used to help predict the likelihood of infection or plague risks before they happen, allowing vineyard managers to take action proactively to minimize the impact. A data center is aggregating the information for wine growers and wineries, so they can make more informed decisions about irrigation and harvest timing.

Photo of tablet app via Libelium

Verizon sees big things for the Internet of things in 2017

Green Wineries Embrace Innovation from the Fields to the Bottle