Some describe it as long-term risk management. Others consider it to be a competitive differentiator. Almost all use it to fund energy efficiency, water conservation and other investments in sustainable resource management.

No matter the rationale, some of the biggest public companies in the United States -- including Wal-Mart, Walt Disney Co., Microsoft and many energy giants -- recently have gone public with strategies to set an internal price on their carbon pollution.

What's more, an analysis published this week by the CDP (formerly the Carbon Disclosure Project) reveals they are far from the only ones. At least 30 companies -- including utilities, energy businesses, technology companies, airlines, transportation companies and financial services firms -- are setting an internal price ranging from $6 to $60 per metric ton on their carbon pollution.

These forward-thinking companies are preparing for the eventuality that some day in the future, they will face a federal, state or community tax or regulation meant to help combat climate change.

"Given the capital-intensive nature of our business, we must make decisions over long-term horizons and take steps today to plan for potential future outcomes, such as climate change regulation," said Jack Ihle, director for environmental and public policy at Xcel Energy. "By so doing, we believe we can reduce both the costs and risks associated with potential new environmental mandates."

In its disclosure to CDP, Wal-Mart notes:

When we were making key environmental business decisions, the existing simple payback model of a specified number of years had to be rethought to ensure we were making the right investments. [Wal-Mart affiliate] ASDA was one of the first U.K. retailers to embed a shadow cost of carbon in all carbon mitigation investment decisions. The actual price we set is confidential, but flexible, to allow it to change with time as external factors evolve, and thus ensure our appraisal model remains world-class.

The carbon pricing revelation was a trend noticed by CDP researchers as they combed through the 2013 CDP filings from companies listed in the S&P 500, as well similar data from global companies, said Tom Carnac, president of CDP North America. "This is the first time we have specifically pulled out this data point," he said. 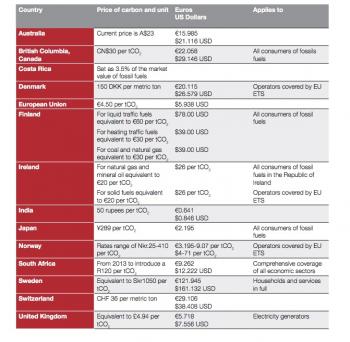 As you might expect, the trend was particularly pronounced among utilities and energy companies with substantial fossil fuels investments.

Exxon Mobil has set the highest price: it assumes a cost of $60 per metric ton by 2030. Xcel Energy uses $20 per metric ton. Some other examples, all cited in cost per metric ton of emissions: Microsoft's range is $6 to $7; Disney uses $10 to $20; and Google's metric is $14, based on the prices that have emerged under California's cap-and-trade program.

Generally speaking, it seems that the longer the life of an asset, the higher the price on carbon. The method that Xcel Energy uses to model its calculations offers some insight. In Colorado, for example, the utility used carbon pricing scenarios to help guide the addition of 450 megawatts of wind capacity and 170 megawatts of solar capacity (still pending approval), Ihle said. During its bid proposals for these projects, the Colorado Public Utilities Commission required Xcel's subsidiary there to use two cases for its bid: in one, the price for carbon was $0 per ton; in the second, the price was $20 per ton, starting in 2017.

"We apply the carbon proxy pricing as an input to the modeling of our utility system," Ihle said. "The models use this carbon proxy price to represent a potential future greenhouse gas policy that incorporate a price on emissions of carbon dioxide, such as a cap and trade program, carbon tax or similar market-based future policy."

Generally speaking, companies are setting their prices according to what might happen or is already happening in their sphere of operating influence. In California, prices of $14 to $15 per metric ton tend to track the cap-and-trade program there. In Canada, where there is a "sub-national" carbon market, the price ranges from $15CN per ton, to $68CN per ton; the high-end of that range is based on projections for 2020 and beyond.

There are many things that the CDP analysis (called "Use of internal carbon price by companies as incentive and strategy planning tool") can't tell us yet.

For one thing, we don't know if these companies are using carbon pricing in every geography or location -- although those with a significant international presence were more likely to do this.

Nor does this initial data tell us how long these companies have using this rubric. But the issue has become "permanently disruptive" to the methods by which companies handle strategic planning and risk management, Carnac said. "In that sense, we believe it's an interesting and positive trend," he added. "We don't have a position on what that price should be."

Who's leading the charge

Among the U.S. companies that report their carbon emissions, water plans and other climate change strategies to CDP, 27 companies placed a price on carbon, along with two foreign businesses (BP and Royal Dutch Shell) doing the same. Here's a list of those companies, organized by segment. Where applicable, their carbon price range, expressed in dollars per metric ton, are included in parenthesis:

Companies speak out on putting a price on carbon