When you were a kid, nobody worried about whether your toys contained polyvinyl chloride (PVC), if their packaging could be recycled or how their manufacturing affected the environment. It was only in recent years that big toy companies such as Mattel and Hasbro started tracking sustainability metrics, leading both to do things such as eliminate tens of thousands of miles of wire twist ties from the waste stream, and vow to shrink their environmental footprints dramatically within this decade.

Green Toys, a 14-person Northern California company, set out from the start in 2007 to be a decidedly different green toy maker, one that didn’t just claim to be eco-friendly but could quantifiably prove that it was.

Its products are plastic injection-molded completely from recycled milk jugs so they don’t contain BPA, phthalates or PVC. They're packaged only in 100 percent recyclable cardboard, and at the end of their lifespan can be tossed into the recycle bin. Not only that, but according to Green Toys co-founder Robert von Goeben, manufacturing with recycled high density polyethylene HDPE No. 2 plastic uses significantly less energy compared with using virgin plastic.

Green Toys also manufactures completely in California, meaning its plastic sourcing, package design, warehousing and distribution are local with its contract manufacturing facility only five miles from the company’s warehouse.

“Most toy companies manufacture in China, warehouse in the United States and the distance between their manufacturing and warehouse is over 5,000 miles,” von Goeben said. “I can get to the factory by driving a half hour, so it’s the constant presence at the factory which allows us to not only be efficient but also keep quality high.” 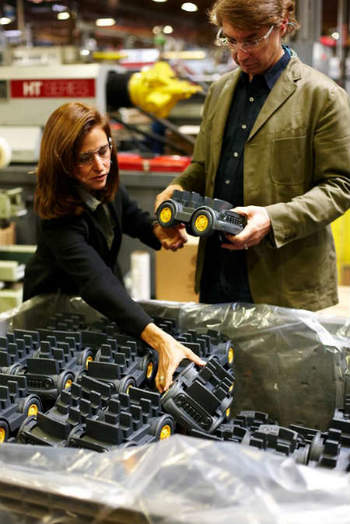 Von Goeben, a former Silicon Valley venture capitalist and toy designer, said the idea for Green Toys came from his wife. She pointed out seven years ago that truly eco-friendly toys didn’t exist.

Since then, things have changed. Now you can find plenty of green toy makers sought after by what von Goeben calls “Whole Foods moms,” people who, unlike generations past, understand that certain materials and manufacturing practices can be harmful to people and the planet.

A handful of U.S.-based eco-conscious toy companies have sprouted in recent years.

Under The Nile is a San Jose, Calif., company that uses Egyptian unbleached cotton to make fabric toys, some sewn by women supported through an economic development initiative called the 13 Villages Project. BeginAgain out of Fort Collins, Colo., sells toys made with plant-based materials such as natural rubber, cotton, sustainably harvested woods, wheat starch plastic and bamboo. And New Jersey-based Montessaurus sells on Etsy hand-made, natural, non-toxic and eco-friendly toys only made in the United States.

“I think the shift is that the parents who buy organic food or more health-oriented products for their kids are our customer,” von Goeben said. “Really it started six years ago as a little more of a niche market but it has gone incredibly mainstream over the past six years. It’s been wild.”

And Green Toy sales are up 50 percent over last year, more than 10 times the industry average, he added.

“People have really supported our mission and there’s just a lot of love around what we do. And we’re just incredibly lucky to be doing what we do.”

The recipe is paying off for the company. Some 1,500 U.S. retailers sell products from Green Toys, which exports to more than 60 countries. The biggest customers include Amazon, Whole Foods, Pottery Barn, Barnes and Noble, Cost Plus World Market and Nordstrom. 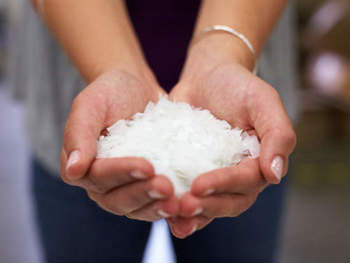 “We started this company in 2007 literally out of a garage with our own money," von Goeben said. "We never took investment; we were profitable all the while. And we’ve been very, very lucky. Business is just off the charts. About a year ago we realized as a company we just couldn’t grow fast enough to meet the demand for our products.”

Then in October the Friend Group, based in Chicago, stepped in and bought a majority share of Green Toys to help it scale.

While von Goeben wouldn’t disclose the company’s revenue, the Chicago Tribune recently pegged it at $10 million a year and reported that the Friend Group paid “millions” to buy in to the company.

“We really needed both additional capital to grow but also we wanted to bring in expertise on the logistics and manufacturing side just to be able to scale up,” von Goeben said.

Why aren't other companies making creations with food-grade recycled plastic? Von Goeben said that it requires special design and tooling, as Green Toy products don’t include screws or glue -- or even metal axles in its trucks.

“The availability of recycled material is really a uniquely American thing in the quality and quantity that we get because we have such a developed recycling infrastructure here in the United States which they don’t have in China,” he said.

Another defining point: Locating the company in California, where environmental and worker safety laws are some of the strictest in the world.

“We know that our factories don’t get away with anything at all."