Sustainable transport initiatives have gained traction in recent years in developing-world cities. This trend can be seen in the growth in Bus Rapid Transit and Busway systems across the globe, the new bike-sharing scheme [Spanish] in Mexico City and the investment in cycling networks in Turkish cities, to name just a few examples. However, such initiatives often are developed at the expense of what should be a key component in their planning -- traffic safety.

While sustainable transport initiatives are usually proposed and evaluated based on their impact on travel times, local air quality, accessibility or greenhouse gas emissions, their potential traffic safety impacts often are overlooked.

A new publication from EMBARQ highlights this issue, exploring the existing literature on the safety impacts of sustainable transport, primarily from the United States and Europe, and adding examples from Latin America and South Asia. The evidence suggests that projects that reduce traffic -- such as congestion charging -- and those that improve infrastructure -- such as high-quality mass-transport systems -- can have a positive impact on traffic safety, in addition to numerous other co-benefits. 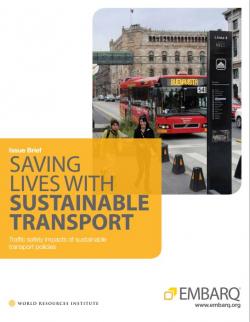 Take the TransMilenio bus rapid transit (BRT) system in Bogota, Colombia. This system is often hailed as an innovative model for mass transport, particularly among cities in the developing world. In addition to its well-documented impacts on reducing greenhouse gas emissions and travel times, the first TransMilenio corridor on the arterial road Avendia Caracas has had an equally significant though under-acknowledged role in improving traffic safety. Findings show that the BRT has contributed to an estimated 50 percent reduction in traffic fatalities on the avenue, helping to avoid more than 200 traffic deaths during its first nine years of operation.

The TransMilenio is not the only BRT system that dramatically has improved traffic safety. BRT and other transit priority projects in Guadalajara, Mexico; Mexico City; Ahmedabad, India; and Melbourne, Australia similarly have curbed traffic crashes and fatalities, while improving the quality of transport in their respective cities. This improved safety record is due mainly to the changes in street infrastructure typically needed to accommodate a BRT, such as creating a central median, making crosswalks shorter and reducing the number of mixed traffic lanes -- all of which tend to contribute to fewer crashes. 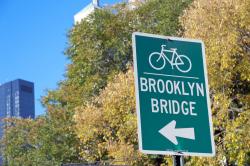 Cities that have implemented policy and infrastructure to promote cycling also have seen significant safety benefits. Copenhagen and New York City, for example, have invested in creating or expanding citywide networks of dedicated bike lanes and tracks to promote cycling. In Copenhagen, the total volume of cycling increased by 28 percent between 1998 and 2009, while the rate of injuries and fatalities to cyclists decreased by 53 percent. Similarly, New York City had four times as many bicycle commuters in 2010 as it did in 2000, while the city's cycling injury rate (the ratio of cycling injuries to cyclist commuters) declined by more than 70 percent.

It also appears that the safety benefits of cycle infrastructure are not limited to cyclists. A study in New York City found that streets with bike lanes are also safer for pedestrians, a finding that could be attributed to the reduced traffic speeds associated with the introduction of bike lanes and tracks. New York City also has taken key steps to improve walkability and pedestrian infrastructure, with significant benefits for pedestrian safety.

Implications for cities in the developing world

Traffic crashes currently claim more than 1.2 million lives every year, according to the World Health Organization (WHO). That number is increasing, particularly in low- and middle-income countries.

In an effort to raise awareness about traffic safety issues and encourage local and national governments to focus on reducing traffic crashes and fatalities, the United Nations declared 2011 to 2020 the Decade of Action on Road Safety. The initiative includes a clear focus on safe mobility and sustainable urban transport. The WHO also has recognized the importance of sustainable transport in achieving the ambitious goals of the Decade of Action. Its latest Global Status Report on Road Safety includes policies to promote walking and cycling and investment in mass transport as critical safety indicators for countries.

Recognizing the potential safety benefits of sustainable transport is a key step, but it is also important to ensure that this translates into high-quality projects on the ground. Through innovative policies and sustainable transport projects, cities in developing countries can meet their growing mobility needs while also significantly improving safety.

This story first appeared on the World Resources Institute blog. Photo of bikers in Istanbul, Turkey, by Ozgur Guvenc via Shutterstock.

Electric scooters on collision course with pedestrians and lawmakers